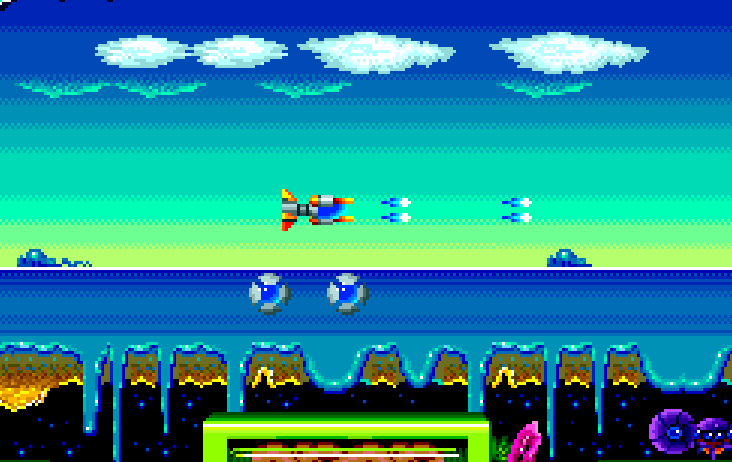 Psychosis, released in 1990 for the TurboGrafx-16 and developed by a company named Dual, has a different set-up than most other shoot-em-ups. The demon Ugar has taken over your mind, and the only way for your subconscious to fight back is by taking on the form of a spaceship and fighting back. It’s profoundly weird, sort of a psychological version of the movie Fantastic Voyage, and lets the graphic designers have a bit more creative leeway that just doing standard spaceships or tracing H. R. Giger. 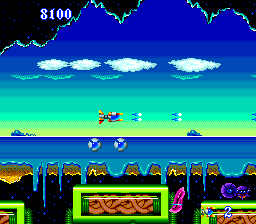 The first stage is astonishingly colorful, even when compared to cute-em-ups like Parodius or Magical Chase. But a cute-em-up this is not, as enemies are a mish-mash of themes, ranging from blinking orbs to cybernetic ants. Despite the vivid of this level, things gets weirder when the floor gives way to the colors leaking out into space, as if it were cake frosting. Power-ups seem to pop up out of tears in the space-time fabric. The levels are known as “Causes”, which are introduced against a background of white noise static. 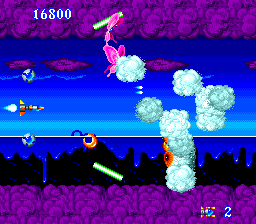 Subsequent levels occasionally have loose themes accompanied by really bizarre visuals. One stage is loosely themed around Japanese culture, with a mid-boss that switches between a Noh and an Oni mask as it takes damage, and the level boss being a white seven tailed fox. Another has a loose Hindu theme, with foes based on the elephant deity Vishnu and the multi-armed Shiva. The final boss has a weird-looking mask that detaches itself from an even weirder looking face. Even though the enemies are strange, there really isn’t a large variety of them. 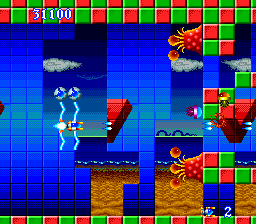 The visual trip is accompanied by a soundtrack that is equally as strange, though in different ways. It’s cold, not really following any melody, and not really resembling any type of other shoot-em-up soundtrack. The harsh tones of the TurboGrafx-16 sound chip is put to work on what’s the most atypical work on the platform. It feels uncomfortable, and while it’s not exactly something listenable on its own, it’s perfect within the game’s mind-bending context. 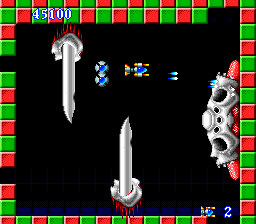 The aesthetics are Psychosis‘ strengths – as a shooter, it’s merely functional. Like many shooters of the era, it’s patterned roughly after R-Type, giving you two orbs that are positioned around the edges of your ship. These can attack enemies and absorb certain types of fire, as well as attacking with one of three extra weapons – a wave beam, an angular laser, and a short range electricity burst. These orbs can be rotated and aimed in four directions by using the I button. 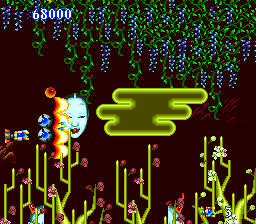 The first level is the most well designed, again keeping structural similarities to R-Type, complete with a snake that weaves throughout the stage. Later levels aren’t as skillfully designed – they’re never bad, but they lack distinction. Technically most of the stages are relatively easy, but only as long as you don’t get killed. Dying will send you back to a checkpoint, and good power-ups are rare. There is a shield power-up, at least, which can absorb a number of hits. Bosses are troublesome too, and while their patterns aren’t difficult to figure out, your weapons aren’t really all that powerful even at full strength, and the bosses can absorb a lot of damage, at least until you figure out a trick to do damage quickly (which mostly involve getting close and using the orbs). 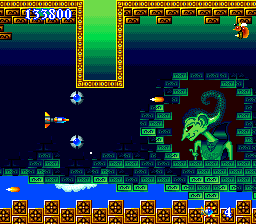 The ending is also pretty disappointing. It’s a simple shot of your space craft, flying through the clouds, before the image turns sepia and the wagging finger of the demon pops up. Then you begin a much harder second loop, where enemies fill the screen with targeted bullets. If you manage to beat this, the “true” ending isn’t much different. 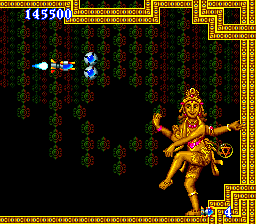 There are a few flashes of cleverness – in the first stage, there’s a small purple cocoon that’s being terrorized by a few ants. If you kill the bad guys without hurting it, then you’ll be protected by a swarm of butterflies when you first encounter the stage boss. Later on, if you manage to get to the fourth stage without getting killed, you’ll get protected by a turtle. The game really needed more interesting ideas like this. Otherwise, it’s pretty short – only five stages long – and never feels like it meets its full potential. 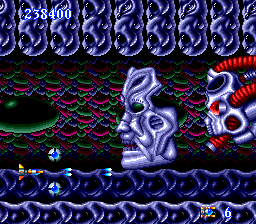 In the Japanese version, this demon taunts you between levels by giving you the middle finger and yelling “Fuck you!” in warbled speech. The animation was changed slightly in the English version so he’s just wagging his finger, and he says “Come on!” instead. The second and third stages are also swapped for some unknown reason. 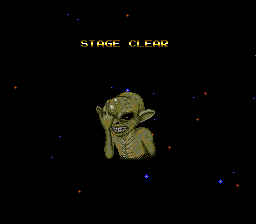 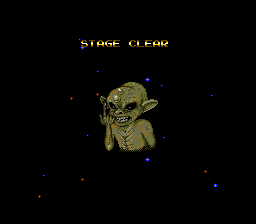