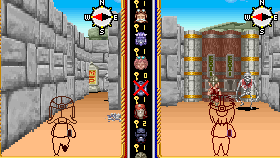 Most gamers know id Software’s Doom, released in 1993, as the game that popularized the multiplayer first person shooter, but the lineage stretches back much further than that. The first entry is widely believed to be MIDI Maze, released in 1987 for the Atari ST, and better known under the name Faceball 2000, for its Game Boy and SNES ports. Yet not long after that, on the other side of the globe, Sega released Last Survivor in the arcades. It’s unlikely that it took any direct inspiration from MIDI Maze, having been published so shortly after it, for a different platform, in a completely different ecosystem, yet it should be better recognized as one of the pioneers of the genre.

For the sake of being pedantic, Last Survivor isn’t technically a first person shooter. Although the action is rendered in a three- dimensional space, your character, rendered as a black wireframe, is viewed from behind, and remains constantly centered on the screen. The joystick allows you to move forward and backward, and to strafe left and right. One button fires your weapon, while the other will allow you to turn 90 degrees when used with the joystick. Otherwise, though, the basic concept and conventions are mostly the same. The perspective and split-screen seem to have been inspired, or are at least very similar to, Midway’s Xybots, which came out the previous year. However, the controls and gameplay are completely different. While Xybots was a cooperative dungeon crawler, Last Survivor is more of a competitive shooter.

The experience here is broken up into 20 levels, each being a fairly small maze. There are eight “human” characters all running around, in addition to various other non-human enemies. The goal is to collect three keys and then make your way toward the exit. The best way to collect these keys is to steal them from other players by killing them. Non-human enemies cannot carry keys, but they do drop gold, which can be used to purchase weapons, armor, and other supplementary items. Once you grab four keys, a map will helpfully pop up and guide you to the exit. A larger map is also accessible by visiting a certain point in the level.

The screen is divided into halves, with two players being able to play on the same screen. Last Survivor was also designed so up to four cabinets can be linked up, allowing eight players altogether. If fewer than eight players are available, the remaining characters are controlled by the computer. Though each of the eight choices have unique (and honestly bizarre) designs, there aren’t really any differences between them. Whenever you kill another person, their decapitated head is left on the playing field until they rejoin the action. This is frankly disturbing, despite how cartoonish everything looks. The stages take place in assorted ruins, mostly Egyptian or Grecian, though a few stages are set in fancy mansions or swamps. A few levels seem to be suspended over thin air, with lots of narrow pathways, though thankfully you can’t fall off.

Developed for the Sega System X board (the same hardware as After Burner and Thunder Blade), the graphics are rendered using the same 3D programming as other Sega Super Scaler games. Rather than using polygons or texture mapping, like other, later first person shooters, this means that everything is displayed as a single flat bitmap. Gameplay-wise, Last Survivor is somewhat awkward, but considering that it was an eight- player network deathmatch game released in 1988, it still serves as a remarkable achievement from a technological standpoint.

Last Survivor was also ported to the FM Towns in 1991, with the conversion handled by CRI. Though the computer was more powerful than any of the available consoles at the time, it still couldn’t quite handle all of the fancy scaling effects, so the visuals have been downgraded, with much smaller sprites. Additionally, the sprites that comprise all of the scenery objects can only be viewed from a single, forward-facing side. For example, when looking straight on to the flat side of a wall, it looks fine, but when gazing down a corridor looking at the edges, the effect is rather bizarre, as there are several forward-facing tiles spaced out to look like a wall. The movement is also choppier, though the speed is still about the same as the arcade version, which is to say, a bit on the slow side

The arcade version uses a rotary joystick. By pressing in the four cardinal directions, you move forward and backward, and strafe from side to side. In order to turn, you twist the joystick in the appropriate direction. For the FM Towns, this is changed so you turn with the gamepad, and press the secondary button in order to strafe. This port also includes an arranged CD audio soundtrack in lieu of the original chiptune music, but it’s hardly memorable.

Last Survivor wasn’t emulated in MAME for a long time, and for a simple reason: no one had the ROMs. The game was only found in Sega-owned arcades, and thus never made it out into the wider world. It wasn’t until 2014 that a board was found, dumped, and emulated. 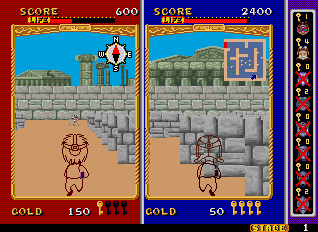