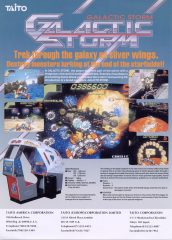 Sega’s Galaxy Force II, released in 1988, was the culmination of their Super Scaler line of the games, using their powerful hardware to create an incredibly impressive 3D outer space shooter. Three years later, Taito tried their hand at the same thing with Galactic Storm. The game runs using an enhanced version of the Taito Z board used in previous games. The action is simple – shoot, and don’t be shot. Beyond your regular weapon, there’s also a powerful bomb cluster, which you can use a few times per life. 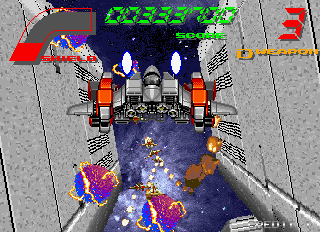 Galaxy Force II’s claim to fame was its ability to use dozens of layered sprites to create the illusion of solid objects. Galactic Storm doesn’t quite use its visual effects in the same manner, but it still looks rather striking. The smooth-scrolling, textured backgrounds look fantastic, especially when the screen rotates along with the ship movement.

The game starts in outer space, but then moves to a planet with South American-style ruins, along with sandworms straight out of Dune. Some of the boss battles are fought with a spinning planet looming just out in the distance, another impressive graphical effect. The technological showcase ramps up in the later stages, with one boss battle being an arachnid-type robot, animated with segmented sprites. The final boss battle is absolutely ludicrous, as a gigantic alien skull attacks with tentacles formed out of flowing orbs. The stages are all colorful, but this singular fight is emblematic of the Taito brand surrealness that came to typify the Darius series. The music was even provided by OGR, and is excellent as usual.

The biggest tripping point is that the sprites are huge. On one hand this allows them to be scaled up largely without much pixelation, but it also makes the playing field feel incredibly cramped, and it’s often very hard to dodge enemy fire. While there’s no timer like there was in Galaxy Force II, it’s also missing the lock-on missiles. It ends up feeling a little more shallow, but that’s not the point of this game anyway. Rather, it excels as a fast paced visual and aural technological masterpiece.