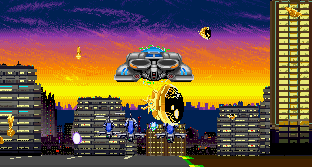 Sega’s Super Scaler games from the mid-80s were (and still are) graphical masterpieces, able to show off extremely smooth 3D graphics using fairly limited technology. Most of them have the same basic feel, with some bit of variation. Sega took the game engine and stuck in different themes, one where you pilot a jet (After Burner), pilot a helicopter (Thunder Blade), drive a car (OutRun), and/or simulate the use of psychedelics (Space Harrier). Night Striker is basically a Sega Super Scaler game starring a flying rendition of KITT from Knight Rider, except it’s actually made by Taito instead of Sega. 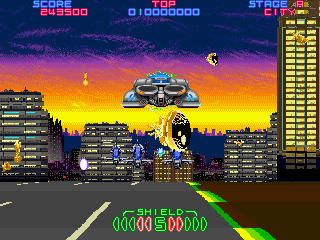 The basic gameplay and controls are pretty much exactly like Space Harrier. By default, your car floats in the middle of the screen, and using the analog joystick, you fly around the extremities, littering the air with pulsing energy bullets and erratically dodging enemy fire. It borrows more than just the basic mechanics, though – the “Factory” levels are almost exactly like the enclosed stages from Sega’s classic, many of the bosses use the same multi-segment sprite technique to simulate the motion of a single enemy, and even the spinning, oval-shaped bullets seem to be almost exactly the same. Some of the stages have obstacles you need to fly between, bringing to mind the 3D stages from Thunder Blade. At the end of each stage, you enter a tunnel, and the path forks, allowing you to choose your destination, similar to OutRun. To be fair, the levels are named with letters like Darius, and the later OutRun 2019 borrows a lot of its visual style from Night Striker, although both games owe a huge debt to the futuristic setting of Blade Runner. 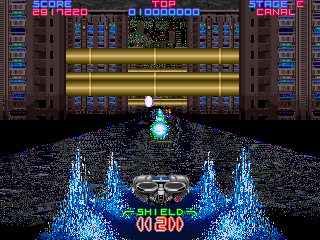 Night Striker only does the bare minimum to innovate on any of these themes. Instead of taking a single shot to be destroyed, you have a shield, which can sustain multiple hits. After your shield wanes, gigantic letters (and a friendly female voice, just in case you can’t read) remind you to “BE CAREFUL” – take a few more hits, and the screen turns black and white while your car explodes, as the game politely asks if you’d like to continue. There are technically 21 stages in total, although they’re hardly unique. Each of the level themes – City, Sky, Tunnel, Sea, Factory, etc – are reused a few times each, even if the enemy layout is different. Still, it gives some replayability to an otherwise straightforward game. Plus, in a few stages, you may find yourself without your car, either riding a bike or flying with a suit. 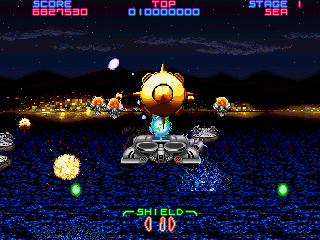 So yes, while it’s hardly original, that doesn’t stop Night Striker from being fantastic. While there were a number of Space Harrier clones in the late 80s, nearly all of them were for weaker systems like the Famicom. Night Striker is one of the few that runs on hardware that actually replicates the exact same feeling of zooming through the sky while dealing massive amounts of destruction. It’s such an impressive looking game that, if it weren’t for the Taito logo in the beginning, you could almost assume Sega developed it. It’s generally a bit darker than most of Sega’s output, but it does lend a unique look, even though that aesthetic is, again, basically ripped out of Ridley Scott films.

The other evidence of Taito’s involvement is the soundtrack, composed by Zuntata, their in-house music team. Zuntata has always been known for atypical scores, and Night Striker is no different – it’s not nearly as catchy or memorable as Sega’s stuff, but the jazzy FM synth has a nice beat that accentuates the action, and could easily fit alongside a Darius game. 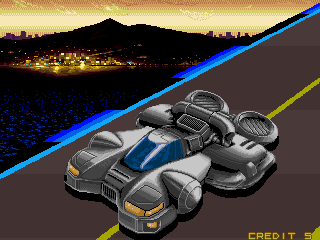 The intensive scaling was far too difficult to effectively port to the Genesis (not like Sega didn’t try, resulting in disasters like the port of Galaxy Force II) or SNES (whose Mode 7, combined with the DSP chip, could pull off something like Super Mario Kart, but nothing this fast nor as advanced). As a result, Night Striker wasn’t ported to any home consoles until 1993, when it was released on the Mega CD. The Mega CD supported scaling while the Genesis did not, but very few games used it effectively. This port accurately captures the frantic speed of the arcade game, and it runs surprisingly smoothly, but at the expense of graphical fidelity. Every single sprite is a pixelated mess, the result of drastically reducing their resolution to work with the Mega CD’s limited capabilities. It does play pretty faithfully (other than simplifying a few of the stages) but it pales compared even to the driving segments in Malibu’s Batman Returns, released around the same time, and it looks even worse now. It does have a slightly expanded intro, as well as the ability to choose the original arcade or arranged soundtrack.

Night Striker later received a port to the PlayStation in 1995, though the frame rate takes a hit, there are fewer sprites on screen, and the draw distance is a bit low. About a year later, Ving published an enhanced version called Night Striker S on the Saturn. It’s more faithful than the PS1 version, plus it features a new CG intro movie and a special Saturn-only mode. It contains a bonus mode with six exclusive levels, although there aren’t any branching paths, so it’s pretty short. It’s not enhanced graphically in any way either, which is a little disappointing. Furthermore, neither of the 32-bit versions feature the arranged music – you’re stuck with the original arcade synth, which seems like an annoying oversight considering how much space is left on the CD. Still, it’s definitely the best way to experience this overlooked gem, and it supports analog control, though there’s a glitch that lets you fly into the ground if you pull too low. 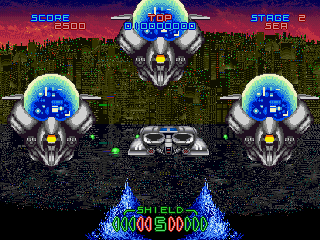 The PS2 port, featured on Taito Memories II Gekan, is an emulation, but it’s plagued by some occasional slowdown and frame drops. 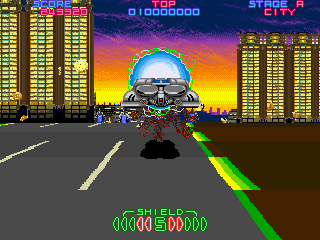 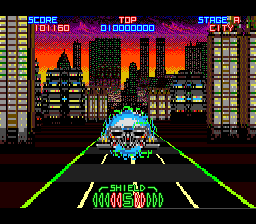