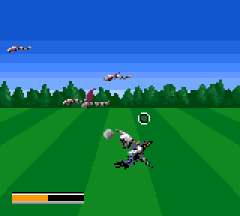 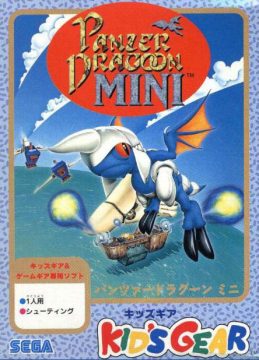 The appeal of Panzer Dragoon lies in its gorgeously detailed 3D world, something which can’t exactly be replicated in the 8-bit hardware of the Game Gear. But Sega tried anyway with Panzer Dragoon Mini, parts of the “Kids Gear” line-up, which is a line-up presumably so children could play portable versions of the same games they watched their older brother playing.

So Panzer Dragoon Mini is a lot like Space Harrier, if Space Harrier were really boring. You control one of three dragons – no riders – with a behind-the-back 3D view. You shoot down enemies, then a few more appear a couple seconds later. Repeat. There’s no lock-on laser or Berserk attacks, just your regular gun. Everything is really slow, and the enemy patterns don’t change much. On occasion, usually during boss battles, the camera switches to the side of the dragon, mimicking the camera rotation from the console versions. Some of the bosses do little kinda cool for the tiny system, but it’s the only real positive aspect of Panzer Dragoon Mini. There are only four stages, with a password function to skip between them. The whole game is orders of magnitude shorter than the Saturn original. This is one of the rarer Game Gear titles, released late in its life, so it’s a bit rare and pricey. Don’t let that trick you into thinking it’s worthwhile.