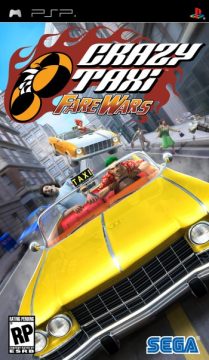 Looking to release a game on the PSP, Sega and Sniper Studios ported over Crazy Taxi. It’s really just a combination of the first two games with some multiplayer added in.

The main modes are the two ports of Crazy Taxi and Crazy Taxi 2. This game gets to be commended in two ways right off the bat. Firstly, it contains the only port of Crazy Taxi 2 outside of the Dreamcast version, which is awesome. The jump button is a great mechanic and if you’ve only played the original Crazy Taxi game that wasn’t on a Sega system then prepare for a new dimension of fun for the formula. Second, this is the first Crazy Taxi game with multiplayer modes. Third, it’s Crazy Taxi on a portable system. Arcadey games are always great ideas for handheld systems and Crazy Taxi is one of the best. So getting two Crazy Taxi games has to be doubly good, right?

Yes and no. The two games are decent ports on the handheld, which means that both ports still have the same glitches and clipping from the games. This is a shame as the developers could have at least tried to fix this. They only run at 30 FPS as opposed to 60 in the other versions. However, the main gripe this game has is that it’s Crazy Taxi on the PSP. Crazy Taxi has a nasty habit of making your hands hurt after awhile from playing. Now imagine that for the PSP; it’s even more painful. Those shoulder buttons were made to hate you and you shall hate them while playing this game. Otherwise, expect the same Crazy Taxi experience, including the Crazy Box and Pyramid.

The game’s much lauded multiplayer mode is interesting and an addition that should have been made in the original Crazy Taxi game. There are three modes: C-R-A-Z-Y, Time Trials, and Head to Head. C-R-A-Z-Y is literally a H-O-R-S-E style game of beating fare times. Time trials is pretty self explanatory. Head to Head is the best mode to play. Two players drive around in the same map and try to get a better score within a specific time. Its really something to be able to see another crazy cab driver while stealing your paying customers! Really Sega, it took the PSP game to finally make multiplayer modes? 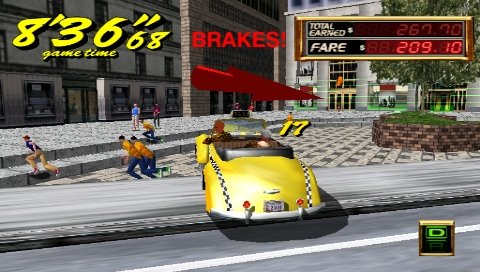 A note that is a little jarring is that this game does not have any music from The Offspring or Bad Religion but instead has a brand new soundtrack. While only minor and the new music isn’t bad, its weird to be playing a game you are so used to and not have the music that accompanied it originally. But you could always put the songs on your memory stick and play it as it supports custom tracks (something Crazy Taxi 3 did not have). An even smaller note is that all advertised stores like Burger King and Tower Records are gone, probably due to losing the licenses.