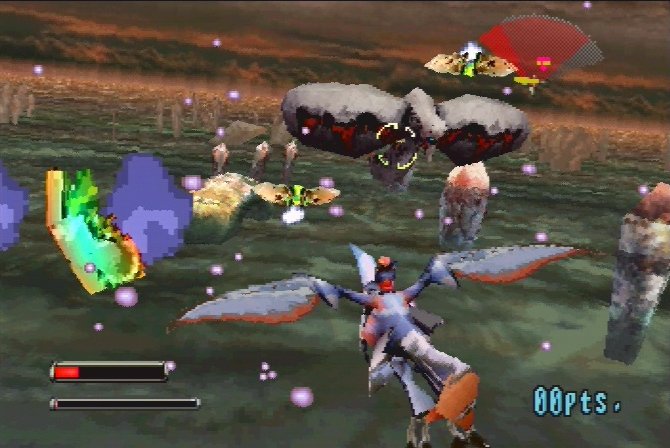 Panzer Dragoon II Zwei, released a year after the original, tells the story of a human named Lundi and his dragon Lagi. His village has ordered that all dragons be destroyed, but he hides his pet and raises it in secret. As one might expect out of a video game plot, Lundi’s village is later destroyed by a mysterious airship, so the only option is to exact revenge.

Since Lavi isn’t fully grown at the beginning of the game, he can’t yet fly, and the first couple stages are entirely ground-based. This leads to one of the games most impressive moments, where the creature charges off a steep cliff and spreads its wings, for the first time. The whole moment is perfect – the music stops, and you seem you be taking a nosedive straight to your death, and maybe think you did something wrong, but it shakily straightens itself out, glides over the vast, empty expanse of the landscape, and provides a safe landing. It’s not until the third stage where your dragon can fly properly, and even then, certain segments of later levels are ground-based. 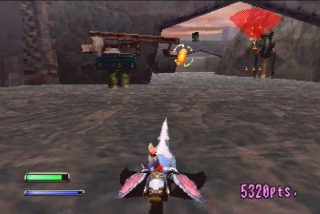 Panzer Dragoon II Zwei introduces the Berserk Attack – by killing enemies, you’ll slowly build up a power meter, which can be unleashed when it reaches a certain level, attacking everything on the screen for a short amount of time. Since you can now save your game, essentially enabling unlimited continues, your performance will affect how quickly your dragon evolves into more powerful forms. There are also multiple routes throughout each level, which also greatly expands replayability. Some of these elements are a bit confusing, because the grading system for evolution doesn’t really make too much sense (you’re graded on Clear, Route, and Technical aspects, which are pretty nebulous unless you’ve read up about them), and it’s difficult to determine where the route forks are.

On a technical level, the graphics have improved only marginally, although the frame rate seems to be a bit smoother. The music is much the same style, although it lacks any orchestral tracks, and overall isn’t quick as memorable. The Pandora Box menu (mistranslated as “Pandra’s Box” in the English version), which shows up in later Panzer Dragoon titles, was introduced here. Unlocked once you beat the game, it’s basically a convenient cheat menu, which lets you change difficulty levels, increase your life or berserk meters, give you all kinds of new weapons, change levels, and tons of other bonus goodies, including promotional videos. Since the game is still fairly short, it gives an incentive to dive in and mess around at your heart’s content. Unlocking it completely takes a lot of time and effort, unless you have a save from Panzer Dragoon Saga on your Saturn’s save RAM, which will open up everything immediately.