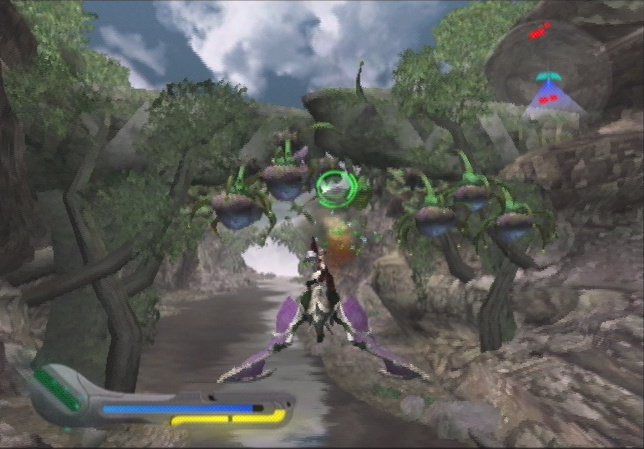 After the death of the Dreamcast, Sega went multi-platform and divided its efforts amongst the three remaining platforms. Most of the mainstream-targeted games went to the PlayStation 2 (Virtua Fighter 4, Shinobi), and the kids titles (Sonic the Hedgehog, Super Monkey Ball, Billy Hatcher and the Giant Egg) made headway on the GameCube. However, Sega seemed to be offering its more hardcore offerings (Gun Valkyrie, Jet Set Radio Future, Panzer Dragoon Orta) on the Xbox, probably hoping to help establish Microsoft’s console as a successor to the Dreamcast. This didn’t quite work, because the system never shook off its stigma as a system for first person shooters and other Western-oriented games, and most of these games kinda flopped. It’s hard to say whether Panzer Dragoon Orta would’ve been more successful on a different platform – like the other Sega Xbox titles, it’s pretty much a niche genre, and possibly still would’ve been ignored. But from a technical standpoint, the visuals hugely benefited from by the superior processing ability of Microsoft’s behemoth.

Even though the Panzer Dragoon games looked okay during the burgeoning days of the 32-bit era, time has not been particularly kind to them. Panzer Dragoon Orta fixed this right up with incredibly crisp, colorful graphics and a near rock-steady 60 FPS framerate. It may lack some of the fancy effects found in later Xbox games, but artistically, it’s one of the most gorgeous games on the platform, and possibly the whole generation. The boss battles and enemies were fairly impressive in the previous games, but everything in Orta just blows them away. 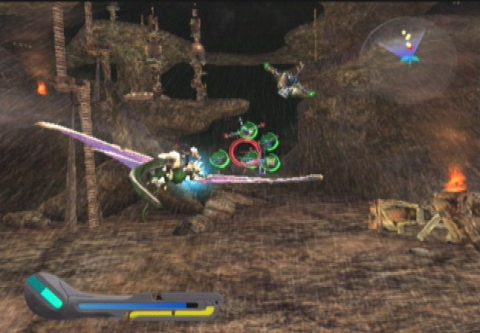 The first stage is a journey through a series of canyons, much like the opening levels in Panzer Dragoon II Zwei, except under the cover of night during a fierce storm. The second stage is filled with some inexplicably strange wildlife, including the boss creature, which looks like a gigantic flying manta ray with vicious flora growing on its back. One of the later stages is a trip through some kind of living computer, complete with the trippiest visuals this side of 2001: A Space Odyssey. At one point, you assault a gigantic airship, which has to be several dozen miles long, and destroy its megaweapon, a gigantic tower that indiscriminately causes destruction with a blazing laser. There’s imagination bursting our of every stage, even the dark, empty wasteland levels.

But there’s more to Panzer Dragoon Orta than just inspiration, as the gameplay has improved significantly. You can now speed up and slow down, a la Star Fox 64, which helps avoid certain enemies. You can also use to encircle boss creatures, similar to the battle system in Panzer Dragoon Saga – finding the best position is usually key to dodging boss attacks and hitting their weakpoints.

There are three different dragon forms that you can switch between at any time – the Base Wing, which works just like dragons in the first two games, with two speed bursts; the Heavy Wing, which has more powerful weapons but can target less enemies with the lock-on laser and can’t change speed at all; and the Glide wing, which doesn’t have the lock-on laser at all, but has a rapid-fire standard gun with a wide targeting range, as well as three speed bursts. You can level up each of the forms individually by collecting certain items, so you can choose your upgrades based on your playing style, although it’s to your benefit to level up all three, since your life meter is extended when you level up. Each also has their own unique berserk attack – the powers of the Glide wing is the only way to regain lost life, for example. 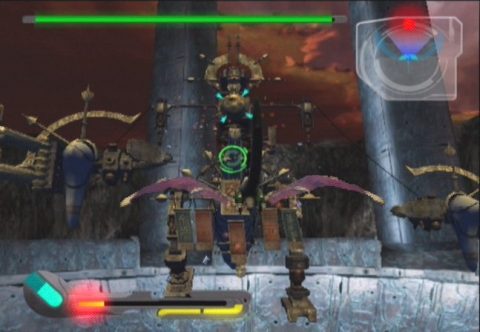 Much like Zwei, there are multiple routes through each levels, and you can save your progress in between each stage. You’re also resurrected right before boss battles if you manage to reach them, which makes the going much less tedious. Your performance will help unlock extra bonuses in the Pandora’s Box menu, which includes the usual mixture of fun options and bonus material. Also included are several sub scenarios, completely new levels featuring other characters from the game, including one of the Worm Riders and one of the Empire soldiers. Better yet, the Windows version of the original Panzer Dragoon is unlockable once you beat the game. It really sets the standard for bonus content, especially since the main game, despite clocking in atten levels instead of the standard six, is still beatable in a about two hours or so.

The story is woven in a bit tighter, with at least a few cutscenes between each stage. The opening cinema tells the story of Orta, a young girl locked in a solitary tower. But a dragon bursts through and rescues her from her prison, only to discover that the whole of the Empire is after her. Only by teaming up with a small band of humans known as the Worm Riders can Orta unlock the full potential of her dragon and defend herself from certain death. It’s a bit overdone for how thin the narrative actually is, but it’s all easily skippable.

Panzer Dragoon Orta isn’t only the best of the series, but it’s one of the best cult classics on the Xbox and one of the last true remnants of the Old Sega before they fell to the dark side. It’s immensely cheap and easily obtainable, and everyone with the system should own it. 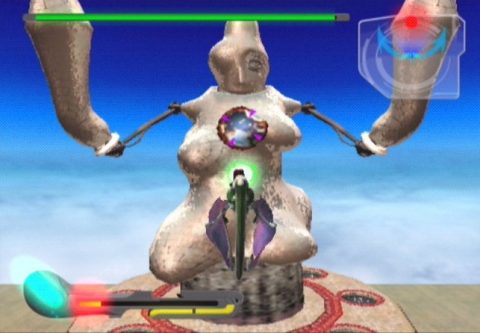 Team Andromeda was dismantled after Panzer Dragoon Saga, with its members scattered to different parts of Sega. Some were reassembled into Smilebit, another internal development team at Sega, for the production of Orta, but this was later disbanded once Sega and Sammy merged. It seems unlikely that the world will see another Panzer Dragoon, despite how loudly fans voices cry for a remake or Panzer Dragoon Saga. However, the spirit lives on in other games, such as Sega’s own cult classic Rez, which utilizes nearly the same play mechanics as Panzer Dragoon.