The Sega Master System version of Rambo is a fairly standard Commando-style run-and-gun, while the NES version is much, much weirder. This version was published in North America by LJN/Acclaim, not exactly known for their quality, and was originally created by Pack-In Video, the same guys responsible for the MSX Rambo RPGs. And once again, they totally missed the point by scaling down the action and replacing them with roleplaying elements. However, this one is a side-scrolling game that bears a suspicious resemblance to Zelda II: The Adventure of Link. 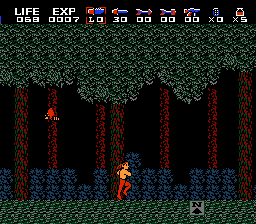 The game actually kinda sorta follows the plot to the movie. When you first begin, Colonel Trautman gives you the option to take on the mission or stay in prison – if you choose to stay in prison, he’ll just say, over and over, that the game won’t begin until you accept. Once you walk around the base and meet all of the major characters, you’re sent out in the jungle with just a knife. At first, the only enemies you’ll face are bees, snakes, more snakes, spiders, bats, flying skulls (!!), piranhas, and demonic flamingos. Occasionally they’ll drop weapons like throwing knives, arrows, and grenades. These come in limited quantities, but are almost mandatory if you want to survive. Your standard hunting knife is slow, weak, and incredibly unwieldy, and it’s quite difficult to escape an encounter without taking at least one hit. You do have medicine that will replenish your health, but that’s also in short supply. Late in the game, you’ll finally get a machine gun, which sure takes long enough. Killing enemies will give you experience, and you can occasionally find little hearts to expand your health.

Although the plot is linear, you’ll still need to wander around the backwoods of Vietnam to find your next objective. You get vague clues from the people you meet, which have some hilariously awful portraits, especially Rambo. In a sense, these exploration elements are a bit like Castlevania II or The Goonies II. However, the layouts don’t always make sense – sometimes if you keep walking in a direction, you’ll end up looping around. Other times, you’ll read a dead end. These dead ends aren’t even walls, really, they’re just blank space that you can’t walk through. On a few occasions, you can walk right onto one screen, double back to the left, and end up in a completely different area. There are also little blocks with “N” and “S” on them, transporting you to different parts of the map. Sometimes, these pathways are one-way, which is maddening. There’s no in-game map, and the repetitive environments don’t make navigation any easier. 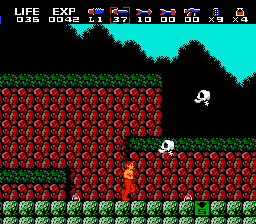 Eventually, you’ll run into Co, take a boat down the river, and run a little subquest by saving a boy from a giant spider. When you reach the camp, you can actually opt to complete your mission as planned by just taking a picture of them…but then you need to go back and save them anyway for the game to continue properly. At any rate, you end up getting kidnapped yourself. At this point, the viewpoint switches to Co, where you “sneak” into the base by simply walking through it. Once you take control of Rambo again, you eventually need to fighting a helicopter, which requires that you have no less than fifty grenades, and have a ton of health replenishment items, because missiles completely rain down from the sky. You eventually get to fly the helicopter – but not before running a fetch quest to find the key – but you don’t get to blow up anything with it. You just save another POW and head back to base for the ending. In this segment, you attack Murdock – the guy who betrayed you – by firing a kanji meaning “anger”, which then turns him into a frog. Hmmm.

The NES Rambo is a bizarre as hell game, and one that doesn’t really fit the spirit of Rambo…but as far as side-scrolling action-RPGs for the NES go, it’s not too bad, though not exactly top tier either. 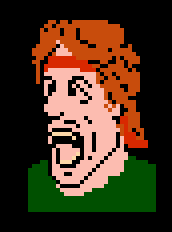 The Japanese version has a hilarious Engrish quote on the title screen that says “Rend the feeling the heat with painful feelings.” The color palette of the character portraits is messed up, so it looks like Rambo has green hair. Also, “EXP” is called “Anger”. In Japan, all of the Rambo movies have subtitles that have the word “ikari” (“anger”) in them. For example, in Japan, the movie Rambo First Blood Part II is called Rambo: Ikari no Dasshutsu (“Angry Escape”). The box of the game exclaims, in Japanese, “A hellish battle game where man’s anger explodes.”