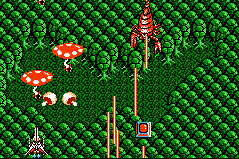 While Compile made a name for themselves with shoot-em-ups like Guardic, Aleste, and Zanac, they also published a wide variety of other titles. One of their most popular was an action-RPG called Golvellius, which originated on the MSX and was released widely on the Sega Master System. Seeking to do something new, Compile fused their gift at making awesome overhead shooters and mixed it together with a Golvellius-like action/adventure, creating The Guardian Legend. 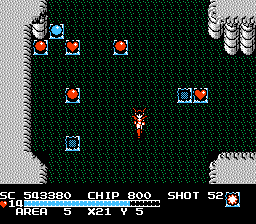 You control a humanoid robot known as the Guardian in English, and Miria in Japanese, who has been tasked with exploring a planet named Naju, which is quickly hurtling towards the Earth. The only way to stop it by finding several hidden keys and then activating the self-destruct sequence. The game begins with the Guardian, taking the form of a spaceship, flying through the defenses of Naju, before landing and changing into human form to allow for exploration on foot.

The surface of the abandoned planet, called the labyrinth section, is much like Zelda, as you explore its mazes to find power-ups. Rather than trudging through dungeons, you fly through corridors, which are tunnels that go straight through Naju’s mantle into the core of the planet. Whenever you reach a corridor, the Guardian changes back into a ship for a shoot-em-up stage. After defeating the boss, you’ll get some kind of goodie, either a power-up or a key to access the next area. The entrances to the main corridors have some kind of trick to opening them, which are revealed by exploring the areas to find hints. 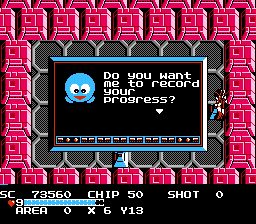 Naju is massive – it centers around a hub that branches off into ten different areas. Not all of the corridors need to be beaten, but it certainly helps, as whatever bonus you’ll get will usually be worth the effort. There are twelve subweapons, most of which should be familiar to players of Zanac or Power Strike. These include multi-directional shots, wave beams, and circular orb shields, and can all be powered up several levels. But there are a few unique ones, like the light sabers. Other items increase your strength, defense, and firing speed. Your score also acts as an experience level, extending your life meter when you reach certain points. Almost all of the weapons work identically across both segments, giving the game a cohesive feel.

The main currency is chips – these can be used to purchase items from the Randars that inhabit Naju, but they also act as ammunition for your subweapons. The number of chips you have also determines the strength of your main weapon. It’s a little weird because it punishes you for using subweapons too often, though this is only an issue in the early parts of the game, before they’re sufficiently upgraded. Plus, items to restore chips are fairly common. 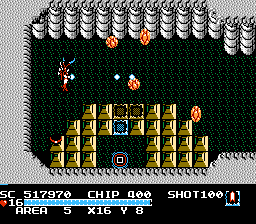 The game does suffer from some repetition – there’s only so much you can squeeze into a 128kb ROM cartridge, so many areas and enemies are simply palette swaps. There are over twenty corridors, though many are similar, just harder and faster. Still, these shooter stages throw enough new bosses at you that it keeps fairly fresh throughout. The difficulty is also a little unbalanced – some enemies can kill you in a few hits while others merely chisel away at your life, and some earlier bosses are more difficult than later ones. Plus, unlike other Compile shooters, getting hit just drains your life rather than outright killing you. This makes the game more forgiving, but your ship is also rather large, and there are some spots where avoiding damage is basically impossible, forcing you to weather it and then grab a health restorative.

Still, the game is more player friendly than other action-RPGs from the era – corridor locations are highlighted on the map screen, and you’ll be returned to the last password room you visited when you die. There is no battery save system though, so you need to deal with 32 character passwords. For those who’d rather not play the adventure parts, you can input the password “TGL“ to play it as a straight shooter. This mode will automatically give upgrades after each level, giving it some sense of balance apart from the main mode. 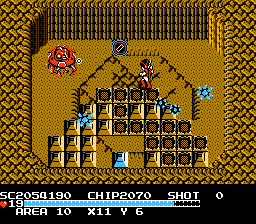 The soundtrack is excellent, per usual Compile standards. The standout tracks are the main theme, played in the opening shooter segment and at a slower tempo in the intro, and the music used in the hub world, whose upbeat melody makes returning to this section a welcome reprieve.

The Guardian Legend is so highly regarded today because it blends two disparate genres in a way that works successfully. Technically, there are better standalone action-RPGs and shoot-em-ups, but there’s absolutely nothing else out there that mashes them together, even decades after the game’s released. The closest are Tecmo’s Super Star Force for the Famicom and Wayforward’s Sigma Star Saga for the GBA, but neither are nearly as good. 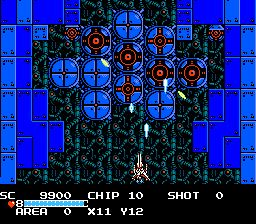 The game’s Japanese title is Guardic Gaiden, presenting it as a sequel/spin-off to the MSX game Guardic. However, according to the developers, the name was established before the game even began production, and the actual design, and even story, has nothing to do with Guardic. The only connection is the use of Guardic’s theme music as the password tune. There was also some discussion about changing Miria to a man for the English release, as they weren’t sure how those audiences would respond to a female protagonist. Of course, they decided against it. It is a little unusual that Nintendo of America would allow a main character that trots around in a red bikini, but the sprite is so small you can barely make out that detail. 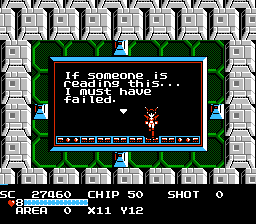 The cover is different in all three territories. The Japanese artwork is provided by sci-fi artist Naoyuki Kato. The American art just rips off the poster for the 1985 horror flick Creature. The European art (below-left) presents the Guardian as a metallic robot, similar to the work of Julie Bell.

Battle of Olympus, The
Night mode