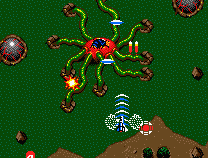 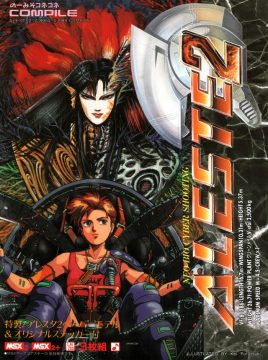 Aleste 2 takes place twenty years after the destruction of Dia 51. The Vagant (AKA Bargund) Emperor Gaizel has made his way to Earth, and wants to turn the planet into his own personal pleasure garden. During the Vagant’s initial attack, Ray Wizn is killed, leaving his daughter Ellinor to hop in the pilot’s seat, and not only save their planet but avenge his death.

Fundamentally not much has changed since the original. The graphics have improved and there are a few digitized voice clips played when you begin your mission. There’s still some flicker and slowdown, though not on the level of the original MSX2 game. At the beginning of the game you can pick your default weapon, though they start out on the lowest level upon respawn. The weapons themselves are also new, plus the icons fall to the bottom of the screen, rather than floating off the top. There are also extra red orbs, which will rotate around your ship and absorb enemy fire. You can also change the speed of your ship with the “Stop” key.

Zanac and Aleste were both pretty difficult, but Aleste 2 amps it up to crazy levels. The difficulty level is determined by what disk you boot with, though by holding the “Select” key on the keyboard before the equipment screen, you can bring up an option menu to change it. On the easiest level, “Human”, it’s manageable to halfway through the game. On “God” and “Oni”, even the first level is practically impossible. 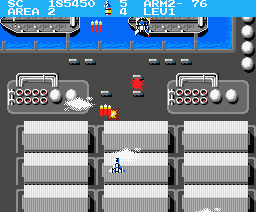 The storyline is also slightly more emphasized, which is apparent in the level background design. While Zanac and Aleste took place over assorted outer space terrain and bases, the first few levels of Aleste 2 take place over Earth, which gives it a more familiar feeling. One of the bosses is even a standard airplane that’s been infested by plants. In the fourth level, you’re warped to an alternate dimension, seemingly to take out the penultimate enemy. But of course the game isn’t over, and after beating the boss, there’s another cinema where Ellinor talks to the evil Officer Brafwell, who reveals that she’s fallen into a trap – due to time dilation in the alternate dimensions, three months have passed back on Earth, allowing it to be completely overtaken. After pumping his body full of bullets, she returns to fight over the infested landscape, with four more levels before destroying the Vagant mothership for good.

Cryptically, the ending features Rosa, one of the Bargund officers, seemingly making peace with Ellinor. It teases future installments, though this particular story never resolved. There were many subsequent Aleste games, but none of them take place in the same timeline as this.

Compile Disk Station volumes 8 and 9 also include arrangements of stages 4 and 7, respectively. Compile initially planned this game to be ported to the Mega Drive, but the project ultimately morphed into what became MUSHA.