There are many indie platformers more well known than Eternal Daughter – and that’s a real shame because there aren’t many indie platformers as good as Eternal Daughter. Despite its relative popularity in the early 2000s (a few years before independently made games caught the attention of mainstream audiences), the game is mostly forgotten nowadays. What could have been the American equivalent of Cave Story (in fact, Eternal Daughter shares a few similarities with Studio Pixel’s masterpiece) has instead faded into obscurity. While one of its creators, Derek Yu, later went on to make Aquaria and Spelunky, his best game remains severely underappreciated. 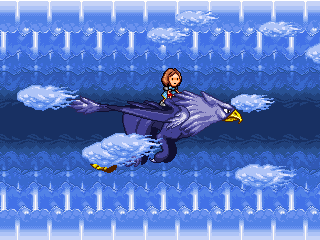 It’s hard to tell why this game became so obscure. It might be because of its high difficulty or some of the issues one can encounter while playing it on a modern computer (caused by its 320×240 resolution that is unsupported by many video cards as well as the limitations of Multimedia Fusion engine in which it was programmed), but it might as well be that the game was simply released a few years too early. While today a beautifully animated retro metroidvania with a female protagonist sounds like a recipe for indie game success, such games weren’t that popular in 2002.

Eternal Daughter‘s introduction show the militaristic, industrialized race known as Dungaga conquering and enslaving human-like Lorians. Years later, Lorian girl Mia kills one of the Dungaga to protect her mother and is subsequently forced to escape into the dark and mysterious forest. What follows is a high fantasy coming-of-age story in which Mia tries to free her people, searches for her unseen father and finds out that everything that happened is somehow related to the evil god Baphomet’s war against other deities.

In her journeys, Mia explores a large and colorful world – the locations include Lorian forest and village, Dungaga city, underground tunnels, Blue Mountain and many more. Everything is done in typical metroidvania fashion so the world is mostly open but reaching certain areas requires acquiring skills or items. There is a lot of detail put into both the world and its inhabitants so that it’s believable and avoids many usual fantasy cliches (for example there is no usual magic vs technology plot – there is even a Dungaga god with power of controlling machines).

The main heroine of Eternal Daughter – a young Lorian girl with mysterious powers, slowly learning about her destiny to fight against Baphomet.

Mia’s half-Dungaga brother – despite his young age a prominent figure in Dungaga military.

Mia’s familiar. Starts off rather weak and useless but grows up to provide the heroine quite powerful support.

A powerful soldier and a leader of anti-Baphemot faction in the Dungaga military.

Warrior (and later king) of the underground-dwelling Grodol race. Tasked with protecting the portal to Baphomet’s realm.

Hoth Bashuul, Rajoman and Mzrmr – the sons of Baphomet. Major villains, attempting to bring their father into the game’s world.

Evil and destructive god, the main villain of Eternal Daughter. 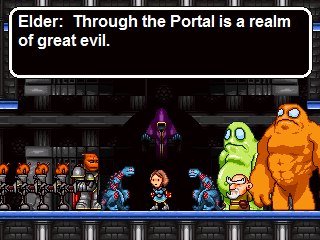 While the game has a fairly large amount of exposition, there is a lot – especially when it comes to personalities of the characters – that is told without words. Despite the low resolution, Eternal Daughter has some really beautiful and fluid animations. It also goes beyond the typical walking, jumping and fighting – outside of the battles the characters talk, laugh, cry and get angry. Those sprites can be very expressive, usually in a sort of cartoonish way: Mia, for example, turns red and literally blows steam when enraged. Some of the cutscenes feel almost like fragments of an animated movie and are a real pleasure to look at.

Players must keep in mind though that Eternal Daughter doesn’t just give them all those things. They’re a reward for completing different parts of the game, and there’s real work that must be put into the game to receive them. As was mentioned earlier, Eternal Daughter is very hard. That’s especially noticeable in the beginning, when Mia has only a few hitpoints, a weak melee attack, a chargeable projectile attack with short range and an ability to jump. Later on the health and attack power will be upgraded and many new weapons and abilities will be acquired, but the game will never become too easy as the enemies get stronger and environmental hazards become harder to avoid. Throughout the whole game the player must be attentive as the ammunition for weapons is scarce, the savepoints are few and far bettwen and the risk of death is always present.

The challenge is usually quite fair, although there are several points at which the less patient players are prone to rage-quitting. The most common ones are a fight against Hume in the early game (as the character doesn’t have any effective weapons yet and can be killed in 2 or 3 hits) and the Riders’ tower at the halfway point (as this part consists of difficult bosses at the ends of hallways filled with hordes of enemies almost guaranteed to slowly reduce Mia’s health). Those parts are frustrating but beating them gives the player a great sense of accomplishment. Final boss is even harder, but that’s to be expected for a climax of a game known for its difficulty. 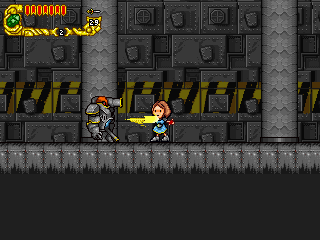 The game features soundtrack by a then 16 years old composer David Saulesco. The music is generally good and fits what happens on the screen very well (military marches are played in the Dungaga city, the forest theme is melancholic and mysterious while the soundtrack to boss battles is fast-paced and intense), but attentive listeners will notice that several tracks sound very similar to either classical music (boss theme shares the melody with Bach’s Invention 4 in D Minor) or other video game soundtracks (music that plays during the exploration of Dungaga mine has the same drum beat as “Under the Rotting Pizza” from Final Fantasy VII while music from the dramatic cutscene before the final battle resembles The Elder Scrolls: Morrowind theme; the latter is probably accidental though as Morrowind was released less than two months before Eternal Daughter). A few years ago the soundtrack received an anniversary release with all the songs rearranged. It generally sounds great, although the MIDI sound of the original fits the game better. Limited edition physical CD release is still in stock so dedicated fans might grab it from Saulesco’s Bandcamp.

Sound effects in Eternal Daughter are very good. There’s something especially satisfying about the sound of Mia’s attacks connecting with the enemy. There are also bits of voice acting in the game but they usually serve as sound effects too (new players will soon become very familiar with Mia’s screams as she takes damage). The closest Eternal Daughter ever comes to voiced dialogs is when each of the Riders mutters a few incomprehensible words before you fight him. 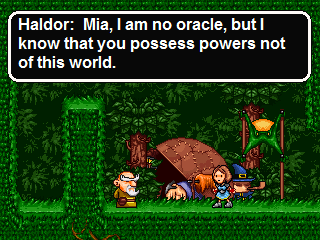 Unfortunately, there’s also one really annoying glitch that has to do with how Multimedia Fusion handles sound. Sometimes when the music changes, the game will hang up for a short while – that’s noticeable but not really a problem. If, however, at the same moment a sound effect is played (e.g. when Mia releases a charged attack), the effect will loop and the game will slow down significantly. It might come back to normal after a while but it doesn’t always happen so resetting might be necessary (fortunatelly, not much progress will be lost as Eternal Daughter players know to save as often as possible).

Speaking of glitches, there are tons of them in Eternal Daughter. The most instantly noticeable one is that the game will not enter proper fullscreen mode due to its resolution being too low for modern video cards. It will switch to 640×480 instead, but either most of the screen will be unused and the game will play in a 320×240 space in the center or the desktop will be visible and the game will occupy a corner of the screen. It takes some time getting used to it but the game is playable nevertheless. Still, it’s too bad that it never got patched.

Other bugs are related to how the engine handles events and collision detection. Enemies can be hit multiple times with the same attack, animations can be interrupted, jumping right after sliding allows Mia to reach incredible speeds and the Mojak weapon (the trident dropped by Rajoman after he dies) can be abused to go through the walls. Those are mostly harmless and can in fact be used for sequence breaking. 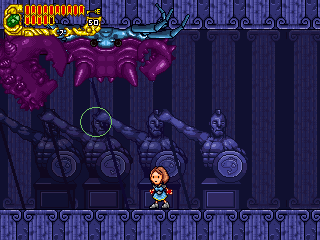 Eternal Daughter is a great Metroidvania – and not just by the standards of indie games. It’s a well-designed, well-written, beautifully animated and incredibly atmospheric title. Derek Yu and Jon Perry clearly had a passion for this kind of games and knew what to include and what to avoid to make their creation play well and stand out from the crowd. The gameplay is tight, the story and characters are memorable and the world always feels alive (though, as is often the case with 2D games, one can’t help but wonder how can Dungaga live their daily lives when their cities are mazes of floating platforms).

While the difficulty may be prohibitive for those not used to challenging games, Eternal Daughter is still worth playing. It even makes you appreciate the story even more, as well as giving you a feel of how hard the quest was for the game’s heroine.

Eternal Daughter is a good game, a good story, a part of the history of the indie game development scene and also an example of what the indie scene can look up to – beautiful, honest, full of passion and made by gamers, for gamers. 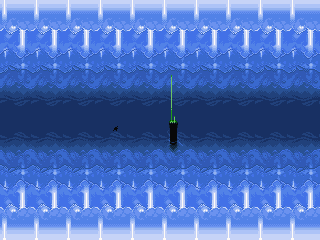