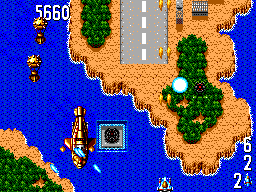 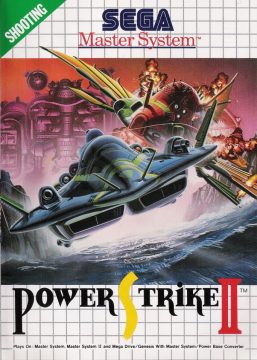 The title for this release of Power Strike II, released only in PAL territories for the Master System, sure is confusing. It’s not a port of the MSX Aleste 2, nor is a console release of the Game Gear Power Strike II. Rather, it’s a completely unique title, with a very atypical setting. Rather than outer space, it very explicitly takes place in the early 1930s. The Great Depression has caused many citizens to turn to air piracy, so as a bounty hunter rather goofily named a “Pothunter”, it’s your job to pilot the Falcon Flyer and shoot them down. 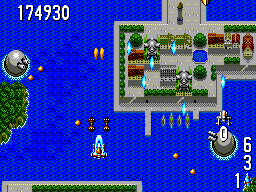 Each mission is prefaced with a “wanted” poster showing who you’re tracking down. The level designs also have an expectedly earthy quality, taking place over oceans, forests, mountains, and mines. The ship designs are extremely anachronistic though, as many of the ships look like they come from one of the sci-fi Aleste games. Together with gigantic, extremely detailed boss ships, the visuals are much more colorful than typical shoot-em-ups, too. There are eight stages, but they go by relatively quickly.

The game plays similarly to the SMS Power Strike, though with some improvements carried forward from Aleste 2, like the ability to choose your starting weapon or change your ship’s speed. Plus it also doesn’t use AI generated enemy patterns, and secondary weapons are infinite. Your main and subweapons are fired together, with the other button used for speed settings, though you can use it to pause, too (activated by a rather helpful setting in the options menu). An interesting addition is a sort of “afterburst” weapon – if you fire continuously for a few seconds then let go of the trigger, you’ll let off a small barrage of powerful wave attacks. There are also spinning orbs to collect – there are three different colors and you can equip two at a time. These affect the strength, speed, and spread of the main weapon, in addition to the power level determined by the P chips. 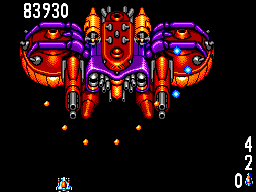 Outside of the premise and setting, there’s not much that’s particularly unique about Power Strike II compared to other titles in the Aleste series, but it’s also better than pretty much every other shooter on the system (not that there were very many), including its predecessor. It’s still quite impressive for an 8-bit shoot-em-up, though.

Being a late release, it’s also rather pricey on the secondary market. It does work on American Master Systems, but it was one of the handful of titles that was actually optimized for PAL television sets. Because of that, it runs a little too quickly on an NTSC console. As with most Compile shooters, the game is already fast paced and rather difficult, and with the speed amped up even further, it makes it even harder.