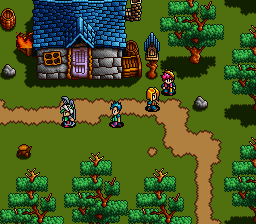 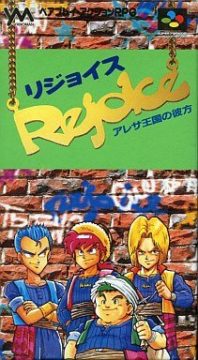 As if the Aretha series did not base itself enough on experimenting on new gimmicks, the sixth and final game took a turn in an entirely new direction. Released in 1995, Rejoice: Aretha Oukoku no Kanata (Rejoice: Beyond the Aretha Kingdom) re-branded itself as an action RPG that features real time battles along the likes of Squaresoft’s Secret of Mana. Furthermore, a second player can drop in and play at any time by pushing the “select” button on controller two. This feature is advertised on the game’s box, making Rejoice one of the few two-player action RPGs on the Super Famicom.

The story takes place in the Mahar Kingdom, which lies beyond the Aretha Kingdom, thus the game’s subtitle. After suffering defeat from Materia and her friends twice during the Game Boy trilogy,  Howard reprises his villainous role and sets his sites on the Mahar Kingdom. On a side note, one has to wonder which person on the development team thought that Howard would be a good name for an evil villain… 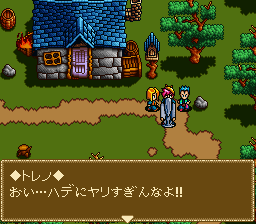 Anyway, Rejoice breaks tradition again with the predecessors by making the protagonist a male. Treno, the leader of a band of hooligans called “Rejoice,” is the exact opposite of the virtuous heroic type. He, along with his three friends, Mikey, Q, and Base, cause mayhem all around their hometown, Ishu. One day, they hear about a goddess statue hidden in a nearby cave from a suspicious wizard named Ben Marxist (the same one from the Game Boy series), who promises to give them the Book of Force, which would grant them powerful magic, in exchange for the statue. Treno, Mikey, Q, and Base steal the statue and return to the village, where they proceed to loot and pillage from the the innocent villagers. Their dialogue is full of crudeness and humor as they gleefully rip off everyone. Karma eventually catches up to them when Ben Marxist gives them the book, unleashing devastating effects. Q turns on them, resulting in Base’s death, then a tsunami threatens to devastate their village. Treno and Mikey try to warn the villagers, but are swept away in the tidal wave. Treno awakens alone where he meets Doll, the magician from every other Aretha game. Together, they start their journey toward Howard’s Castle to set things right.

Rejoice has some rather pleasant graphics. The dungeons, the towns, and the character sprites look very colorful. Each area – from the forests and rocky lava terrain to the snowy landscapes – look lively, especially with the extra effects of snowfall or the leaves fluttering about in the wind. The back of the box even advertises the colorful graphics, and the game actually delivers in providing a beautiful world for the player to explore. 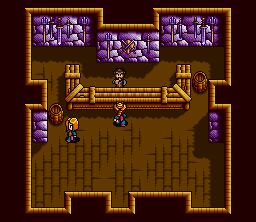 The game also has a great, outstanding soundtrack. Each boss has his own background theme. There are not only plenty of different songs throughout the game, but most of the songs have a great quality to them, which you can listen to any time in the configuration menu. The developers even boast this feature on the game’s box, as well, stating that the “tight hip-hop sound makes for good music.” This statement refers more to the grooving bass lines coupled with the prominent drum sounds, as there are a few songs that pay homage to the main theme song from Beverly Hills Cop movie from the 80s. Some of the songs, such as the forest level song, start out mellow with the realistic sounds of running water and birds chirping, followed by a tranquil harmony that complements the layout of the level.

The gameplay of Rejoice truly shines due to the fast-paced action and progression. The characters dash around at a fast rate of speed, and they breeze through combat just as quickly. There are a few puzzles and such, but nothing that would strain the mind. The hit detection is not as refined as some of the more popular offerings like The Legend of Zelda: A Link to the Past, but the addition of the cooperative two-player mode makes up for the shortcoming. The second player simply drops in as whoever is in the party with Treno at the time. There is some slowdown with a second player, but it depends on the area and how many enemies are on the screen at once. 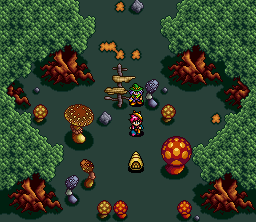 This gem of a game has a few cracks though. First off, there is no HP indicator while you fight. You would have to open up the menu screen to see what your health is. Also, you cannot use healing items during a boss fight. Despite of being deprived of such common RPG necessities, your characters level up very quickly. In fact, I cannot think of another JRPG where you can level up faster—it’s almost like instant gratification. You only need to thrash a few monsters for a level, which also completely recovers your HP. You can exploit these level gains to your advantage during boss fights, because you can simply dispose of the boss’s underlings to gain levels and recover your health.

The story is simple, yet charming and entertaining from start to end. The character development is quite good for the 16-bit era, as the players watch Treno develop from a selfish criminal into a responsible hero. The dialogue between the likable characters is well-written, humorous, and full of lively banter. It’s a treat to see Doll return once more to achieve his lifelong dream of becoming human. All in all, Rejoice makes a great conclusion to a great series.

It’s such a shame that this game never made it to North America or Europe. Given that this game’s released date was in 1995 on the Super Famicom, there was little chance of localization due to the advent of Sony PlayStation and Sega Saturn, both of which were already released in Japan at the time. 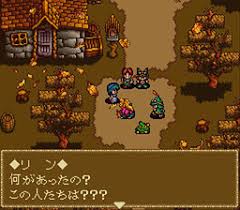 Unfortunately, Yanoman has not published any games for a long time, and this was the last Aretha game released, so there is not much hope on ever seeing anything new in the future. So far, no completed online translation exists. Aeon Genesis supposedly has an 85% completed translation, but nothing has been updated since 2011. After this, Japan Art Media worked with Game Arts on Lunar games (including its remake for the Saturn/PS1 and GBA), as well as the PlayStation 2 remake of Phantasy Star.