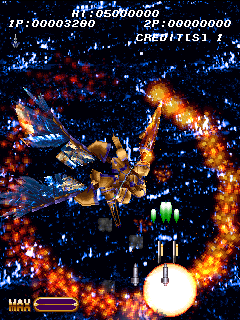 Brave Blade was the very last shooter Raizing made before focusing on fighting games. If something is going to end, why not go out with a bang? While it’s still an overhead shooter, it utilizes 3D polygonal graphics. For having been released in 2000, it looks quite dated, especially with its blotchy low-res textures that made it look like a PlayStation game. (The arcade board it runs of off, the ZN1, used similar hardware to the system.)

Brave Blade‘s story involves giant medieval weapons that can transform into robots called Runeswords. It seems that the land is going through a “war of the Runeswords”, but a lot of the text is in Japanese. The giant robots and medieval weaponry makes the setting very similar to Spriggan. Cutscenes are frequent, giving you times, dates, locations, and vital information on what is going on before each level, very similar to Soukyuugurentai. It even features the same misspelled “DICISION” stamp when you pick your character. Unfortunately, the character roster is limited compared to past Raizing games, with no guest characters either.

In terms of gameplay, Brave Blade most resembles Technosoft’s Hyper Duel. You play as a Runesword with standard shots and sub-shots that depend on which one you’re playing as. Your other button transforms you from weapon to robot from and attacks using a melee weapon. There is also a third button that can only be used when your super meter is full (which replenishes over time). It transforms you into an invincible super robot until time runs out. The timer underneath your super robot is very useful, as it helps avoid many other problems with invincibility in manic shooters, such as not knowing when the invincibility wears off.

Another thing you can use your super meter for, even when it is not full, is for blocking. If you press and hold the attack button in robot form, a force field surrounds your robot. With each attack the force field takes, a little bit of your meter goes down. When it is depleted, the words “guard broken” appear, meaning that you have to wait for your meter to fill back up before you can use this shield again.

Knowing when to be in what form is critical to scoring in Brave Blade. Every so often, popcorn enemies will drop badges. If you use a melee attack on these badges, they spin and grow larger. The larger the badge, the more points it is worth. Some robots are much better at hitting these badges than others are, adding depth to which character you play as. 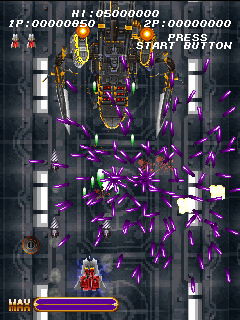 One of the best parts of Brave Blade are its bosses. Like your Runesword, most of them have two forms, a “standard” mechnical form (like, for example, a tank) and a robot form. One of the coolest is The Great Mouth Nightmare. At first, it might seem off that a seemingly standard space ship would have such a strange name. Then, he transforms mid-battle and starts trying to eat you. It’s an incredibly cool boss and the cutscene that follows his death is funny. Another really cool part has you flying through the sky and the enemy starts jumping out from the clouds for a surprise attack. The effect of the enemy robots jumping from the clouds was cool and unexpected.

Like most of Raizing’s games, Brave Blade was never ported, but even most of shooter fanbase tends to overlook this one. The 3D visuals may be off putting to 2D purists and it never really reaches the technical depths of the rest of their games, it’s still a fairly well designed shooter, and it’s unfortunate that history has doomed it to obscurity.

Brave Blade more or less spelled the end of Eighting and Raizing’s spell in the field of shooters. Instead, they began to concentrate on their 3D fighter series, Bloody Roar. They found more popularity with their Naruto: Clash of the Ninja series for the Nintendo platforms, as well as various other anime fighters like Bleach: Heat the Soul and Battle Stadium D.O.N. They worked with Konami on the unfortunate Castlevania Judgment, and also developed Tatsunoko vs. Capcom for, well, Capcom. 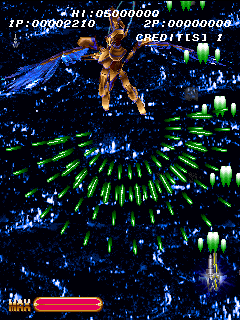 That’s not to say the old shoot-em-up spirit of Raizing is gone. Shinobu Yagawa left the company to join Cave and has been steadily working in many titles, including Ibara, Pink Sweets, and Muchi Muchi Pork. Many of these have elements of Raizing’s shooters, particularly Ibara is very similar to Battle Garegga.