Raiden DX is a definite curiosity in the series, as it appears at first to be nothing more than an updated re-release of Raiden II. However, while it is not quite its own game, it offers a fair deal more than Raiden II that sets it apart and arguably makes it the best title of the classic series. The best comparison to draw is Metal Slug X compared to Metal Slug 2, as both games have different enemy arrangements and graphics, but their stage structure is essentially the same. Raiden DX features completely different stages from Raiden II and a very interesting way of arranging them for play. The same classic gameplay is there, and while the differences aren’t that prominent at first, they come through as welcome additions that make everything just that much better. 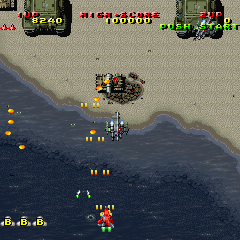 The graphical style of Raiden DX is essentially the same as Raiden II, which is just fine. There is a nifty graphical change to the plasma beam where it flashes multiple colors as it locks onto an enemy, but other than that, it looks much the same as the previous games. The sound design is similar and the OST consists of remixed tracks from the first two Raiden titles. It plays exactly like Raiden II without any notable changes in arsenal. All the weapons are intact: The vulcan, the laser, the toothpaste plasma beam, the straight missiles, the homing missiles, the nuke bombs, the cluster bombs, and those awesome starts that fire off when weapons combine in two-player mode. The feel of the original games is still very much intact, but what exactly are the changes that warrant the “Deluxe” moniker? 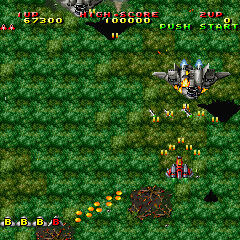 The new content to DX comes in the form of significant replay value by offering three different courses selected at the main menu: Alpha, Bravo, and Charlie. These courses are seemingly in order of increasing difficulty, but the very existence of the Alpha course defies conventional difficulty structure. It is billed as a “Training” stage consisting simply of only one level. This is only half right: It is merely one level, but I’m not sure I’d consider it “training” when it’s just as difficult as the rest of the game. “Endurance” is a more fitting moniker for the Alpha level. It is one long unbroken marathon level that totals to about fifteen minutes, and it becomes increasingly difficult the farther in you travel. You get no continues once all lives are gone; instead, your overall progress of how well you did is calculated (how far you got, how many enemies you shot down, etc.). It could be considered “training” in the sense that it’s meant less for beating and more for gauging your overall skill at Raiden. However, there is a definitive ending to this gauntlet complete with a tough new boss: A large striped desert tank with starburst turrets. 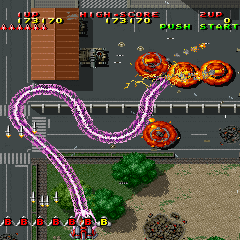 The Bravo set of levels comprise the “Novice” course, which is actually just the first five levels of Raiden II. The terrain is the same and so are the bosses, and the enemy placements are similar if not exact. The game cuts out just before you head off into space, and it is Raiden II for all intents and purposes save for some changes in gameplay, mentioned below. That brings us to the Charlie levels, the “Expert” course which is naturally the whole eight levels all in a row. However, this is where things get interesting; these levels are completely different from Raiden II, with new terrain and enemy waves. There are even some new enemy types, like these statues in stage 4 that spit bullets at you from their mouths. The stages are overall harder than the originals, though they keep the same bosses as before, albeit with different colors. 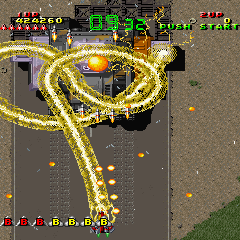 If you’re a shoot-em-up god and can somehow beat the Expert course without continuing, you get to play a secret ninth stage. This super-tough bonus finale takes you over several asteroids before coming to a bizarre chrome surface (possibly the remains of an alien spacecraft or planet) where enemies morph from the flat ground into existence. An ominous electrical storm leads up to the true finale, where the Crassanian red diamond has fled into a giant metal sphere which morphs into a vicious platinum tank. It is difficult to start, but it gains the assistance of smaller red diamonds after taking significant damage. The real kicker about the final stage is that you can’t continue on the spot after dying, and you have to go back to a checkpoint, making the last boss even worse if you screw up. It’s a helluva challenge that warrants full bragging rights if obliterated! 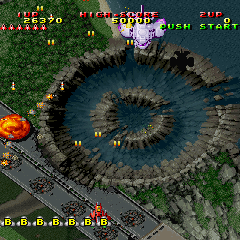 The overall changes in gameplay affect how points are earned aside from the obvious method of destroying as many enemies as possible. These changes apply to all three courses of gameplay, including the Novice course, thus making the stages from Raiden II not exactly like they were in their game of origin. First off, a timer appears at each end boss, and the sooner you destroy them, the bigger a bonus you are awarded. Furthermore, in addition to the yellow medals, the blue medals, Miclus, and Fairies, you can find hidden towers that pop out of the ground if you fly your ship over their exact position. Blowing these concealed suckers up earn you 50,000, though good luck finding them. Aside from other subtle factors, like earning mega-points for collecting a bomb when you’re already maxed out at seven of the same type, the biggest score change involves the medals. 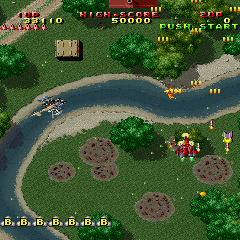 Medals now decrease in point value the longer they are on-screen, denoted by a gradual fade in color to a lifeless gray. They start out at 500 points immediately (3000 for the blue super-medals), then fall down in 100 point increments before turning entirely gray, worth a measly 10 points (though still counting to the end-of-level total). However, a second after a medal turns gray, it very quickly regains its full color for less than a second before going gray permanently. If you time it right so you pick up the medal during this brief flash, it’s worth a big 3000 points for the normal medals and a titanic 10,000 for the super medals. If you find a Miclus and fly into him when he sneezes (telegraphed by a pause in animation), you snag a ridiculous 50,000 points. It can be difficult to get the right timing for picking up these big bonuses, particularly as you have to mind enemy fire as well, but this presents an extra layer of challenge for gamers determined to snag the highest of high scores. 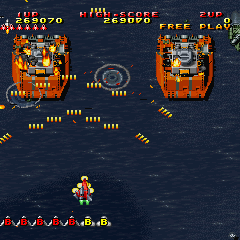 All of the additions make Raiden DX the best of the classic series almost without question. It got even better with its PlayStation port, released in 1997, a seamless arcade-to-console translation that brings with it a myriad of bonus goodies. You have the standard gameplay options for console ports, such as difficulty level, amount of lives and bombs, flipping the screen position, and so forth. Inexplicably, it has a demo of Seibu Kaihatsu’s obscure Puyo Puyo-esque puzzle game, Senkyu/Battle Balls. It’s a fun title to be sure, but why it’s included alongside a shoot-em-up is anyone’s guess. You also get an entirely original “New Release” soundtrack that sounds reasonably badass. 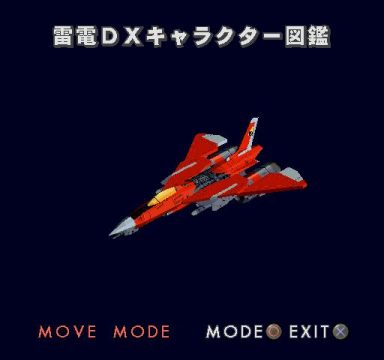 After beating the Expert course, you also unlock the Viper Phase 1 soundtrack which somehow fits well here! Completing the Expert course also unlocks the “Encyclopedia,” a cool 3D gallery of the Raiden fighter and all of the game’s bosses, and the “Special Stage,” the obligatory boss rush of all ten bosses, including the Training Stage and Extra Stage bosses. Perhaps the most interesting item is “Master of Raiden,” a demonstration of the Training stage unlocked if you manage to beat it. The AI of this demo finds every hidden item, obliterates every single enemy, and is otherwise flawless. It is awe-inspiring despite how inadequate it is likely to make you feel. The only downside of this port is that this was never released outside of Japan.

Like Raiden II, there is also a “New” budget version of Raiden DX that’s basically the same but has most of its music removed and with extremely poor sound quality. Avoid!