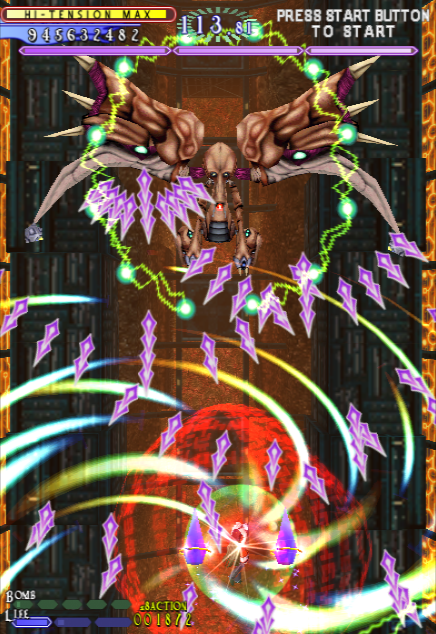 Three years after the arcade release of the second Shikigami game, the third episode made its debut in 2006. For a series known for having convoluted and even incomprehensible plots, Shikigami III takes it up a notch higher. Rather than Japan, Castle of Shikigami III (as the US version is known) takes place in the fictional Middle European country of Alcaland. Alcaland commonly handles its own business, and prefers to operate away from the outside world. As it has little economic worth and is widely desolate, few other governments have any interest in theirs. While Alcaland has its own borders, it must thrive on electricity and support from neighboring countries to operate. When a rash of disappearances and comatose victims begin occuring, Alcaland is forced to cease their isolation and seek outside assistance.

After consulting some 20-year-old documents showing their talent for investigations, the Princess of Alcaland came to the conclusion that Japan would be the right country to turn to. She also considers this to be an appropriate move on Japan’s part, to replay Alcaland for their services in the past. (Reportedly consisting of a single armed yacht sent to Japan’s ‘aid’ during the Russo-Japanese war.) Although it was a matter of much contention in the government, Japan eventually agreed on allowing The Association for Psychic Studies to organize a group to solve Alcaland’s troubles. It isn’t long before the organization recognizes the cause of the disturbances: the return of the infamous Castle of Nightmares. 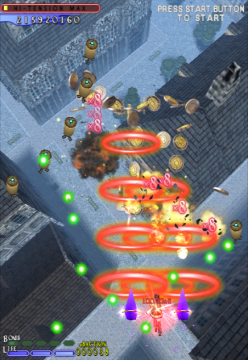 Castle of Shikigami III changes little from its predecessors, at a glance. The Tension System is unchanged, as are the normal shot/shikigami/bomb attack methods. However, it does include a few new gameplay mechanics. The Tension Max System allows a player to shoot at a High Tension rate of fire for a limited amount of time, at the cost of one bomb. Their attacks will then have the same amount of firepower as they would when grazing bullets. Additionally, all coins received during the Max Tension phase will be at the maximum multiplier (x 8). The home versions also feature remixed versions of themes from previous Shikigami games.

For single players wanting to experience the two player story modes, Alfa System added a “Dramatic Change” feature. This allows one player to use two different characters, experiencing a two player story mode, with the ability to switch between the two players at will. Another welcome positive for Castle of Shikigami III is that it finally received a proper localization, or at least the best a shmup can hope for. The Wii version was published in the US by Aksys Games, also known for publishing the later Guilty Gear and BlazBlue games in the US. They had planned to release the Xbox 360 version here as well, but were reportedly turned down by Microsoft. There’s no real difference, outside of the HD visuals in the 360 versions, but it hardly matters since the game’s not exactly a looker to begin with. Aksys made the best of it, and localized Shikigami III‘s dialogue and voice acting with an appropriate mix of seriousness and outright insanity. According to their staff, the original version’s dialogue was similar in tone, and didn’t always make a lot of sense. Still, it wouldn’t be a Shikigami game without a varied and eclectic cast.

Unknown circumstances resulted in the death of Kohtaro’s former Shikigami, Sazae, so the shrine maiden Sayo Yuuki has taken her place. While Sayo’s new look is the result of her taking Sazae’s role, Kohtaro’s comes courtesy of Fumiko Odette Van Stein, who designed the outfit for her (self-professed) betrothed. Though both are skilled investigators, Kohtaro and Sayo spend more time mired in lover’s quarrels than doing much crime solving. It’s also possible to use Sayo with her original shrine maiden look from Shikigami 1 & 2.

Times have been hard for Hyuga. Not only is money tight, making him more desperate than usual, but his landlord is none other than the infamous witch, Fumiko. And when the rent is due, she expects her pay. Much to Gennojo’s ongoing terror, Fumiko expects payment in currency other than money.

Fumiko’s gained an (even more) fearful reputation in the years since the last incident. Still accompanied by her faithful butler, this witch practically has something to hold over every cast member in the game. And she always gets her dues. In the meantime, she enjoys trampling on falling foes, claiming men, and destroying women she regards as a threat.

A travelling doctor from Korea, Mihee’s reasons for visiting Alcaland are less than noble. As gifted with ending lives as she is with saving them, Mihee takes sadistic pleasure in killing. She is also seeking her cousin, Kim De John, for reasons unknown. Her attacks are the same as those of Kim’s from the previous two games.

A fairly enigmatic girl, Nagino appears to be a carefree elementary school student investigating Alcaland for fun. She enjoys toying with Kohtaro and Gennojo’s relationships, and calls them both ‘papa’. (She addresses both Sayo and Fumiko as ‘mama’.) Her rabbit is known as Strider, and goes everywhere Nagino does. Nagino is related to Niigi G.B. from Shikigami II, and uses the same shot and shikigami attacks.

A long-term friend of Kohtaro’s, Roger insists on heading overseas to assist in the incident. Roger operates on his own dime, without the support(or likely the permission) of the Japanese government. Despite his questionable motives, his genuine ninja skills make him a talented investigator.

At the age of 10, Emilio is a member of one of the noblest families in Alcaland. He detests involvement in foreign matters. Emilio has the means to call demons to his side, a gift that runs in his family. Though he has a good personality at heart, he tends to look down on commoners. Emilio uses one of the completely new playing styles. His normal shot automatically homes in on enemies. For his Shikigami attack, he can generate a laser at any fixed point and direct its path by moving, or create one in a straight line, which will follow his movement.

A police officer from the distant future known to most as “Time Gal” (in an officially licensed appearance from the laserdisc FMV game), Reika has traveled to the past to help solve the mysteries of Alcaland. Reika is as careless as she is carefree, and tends to cause more problems than she solves. She has one of the most beginner-friendly firing patterns. Her normal shot has a wide radius, and her Shikigami attack consists of constantly firing lasers. They’re fairly weak, but fast and effective. Her bomb isn’t really a bomb at all, but temporarily freezes all action on screen.

A brooding exorcist hired by Emilio. Batu simply wants to get in, get the job done, and go, and tires of Emilio’s nationalism. He enjoys hard liquor. Batu’s normal shot is similar to Roger’s, though with a wider radius. In addition, they circle around him before firing. His Shikigami attacks must both be charged up. One takes the form of a focused forward blast, while the other uses his staff in a circular manner.

The ever loyal butler of Fumiko finally gets his chance to shine. Courteous and proper to no end, Munchausen proves he’s just as much a force to be reckoned with as the rest of the investigators. His noble appearance conceals a fiery nature. Munchausen’s attack pattern is very similar to Fumiko’s, except she provides the bombardments of his Shikigami attack. He’s a hidden character in the PC version, but is available immediately on the US Wii version.

It’s been said that the adversaries found in the Castle are generated based on the memories of its visitors. This proves especially true with Shikigami III‘s bosses.

Kohtaro is a detective with the Metropolitan Police, assigned to the case. His special attack uses a spiritual familiar named Zasae who accompanies him everywhere, whether he likes it or not.

The guardian of the second level’s waterways, Mibuya is a devout warrior who has ties to Sayo; much like Dundeon from Shikigami II.

A mysterious woman who, according to Fumiko, can be nothing more than a ghost; as she died by Fumiko’s hand. She was Fumiko’s stepmother, and killed by her in a conflict over a man.

A violent werewolf, with a fighting style reminiscent of Gennojo’s. One of the toughest bosses in not just the third game, but the entire series. He sounds a lot like Seth from Street Fighter IV.

A childhood friend of Kohtaro’s, betrothed to him at an early age. She has been bedridden in a hospital for many years. Is it really her, or something worse? She also has a key role in the PS2 text adventure based on the series, though she acts much colder here. The final fight in Shikigami III is a thorough affair. Tsukiko has not one, not two, not three, but four final forms. The third form takes the longest by far. It consists of a lengthy firefight with the exterior of what’s best described as a massive living battleship.