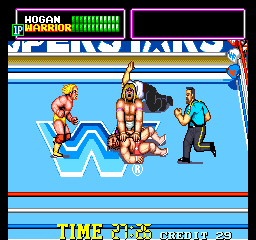 Pro wrestling hit its first boom period of the modern era in the late ‘80s, spearheaded by the World Wrestling Federation (now WWE) and the power of Hulkamania. Unfortunately for video game fans, licensed wrestling games had been thin on the ground or, in the case of WWF Wrestlemania, desperately mediocre, with players having to make do with the likes of the vastly superior Pro Wrestling for the NES.

Enter Technōs Japan. Having excelled with the grappler Mat Mania in 1985, they bagged the rights to produce the first WWF arcade game. Released in 1989, WWF Superstars proved an instant hit and fixture in arcades around the world.

If something feels familiar about Superstars, it’s because the game is based on the Double Dragon II engine rather than Mat Mania, which is particularly noticeable in the character designs and when trading fists. It actually shares more DNA with Mania’s 1983 predecessor, Tag Team Wrestling, as Superstars focuses solely on action as a duo.

Picking two of six combatants, you begin your quest to win the WWF Tag Team Championship from Andre The Giant and the nefarious ‘Million Dollar Man’ Ted DiBiase. 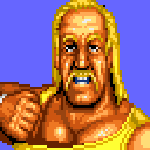 Hulk Hogan: Spurred on by his millions of Hulkamaniacs, Hogan is the top babyface in the WWF and the face of the 80s. 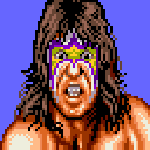 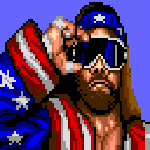 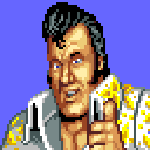 Honky Tonk Man: A shake, rattle, and rollin’ Elvis impersonator who will use every trick in the book to eek out a win. 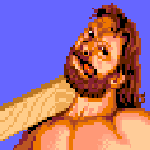 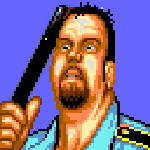 Big Boss Man: A former corrections officer who uses his sheer size and strength to strike fear into opponents. 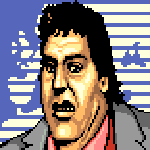 Andre The Giant: Seven foot four and over five hundred pounds, Andre is the largest competitor in the game and one of the big bads you need to beat to win championship gold. 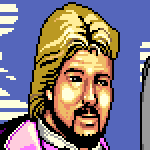 ‘Million Dollar Man’ Ted DiBiase: If he can’t buy his way to a win first, the sneaky DiBiase will use any underhanded tactic he can to retain his belt.

Superstars gives you one button to punch, one to kick, and pressing both at the same time launches you into a sprint. You lock up automatically when you get close to an opponent, and then it’s time to hammer both buttons to win the grapple, with combinations of the buttons and control stick performing various moves. You can also whip your foe to the ropes, and hitting either button at just the right time after they rebound will see your adversary flying through the air or eating your boots. Once you’ve got a contestant lying on the mat you can stomp away, hit them with an elbow drop, or even land a special move. If you’re being pinned, you must bash the buttons to kick out, and if you’re pinning an opponent you gain control of your tag partner to fend off your adversary’s as they dash to make the save. Get too close to the ropes and the action spills to the outside where, unusually for this period of the WWF, you can whack the other side with benches and chairs with no fear of disqualification – but by sure to re-enter the ring before the twenty count, or it’s back to the continue screen.

All wrestlers have their own finishing move, and they’re applied in ways you’d expect; pressing kick next to a downed opponent’s head while playing as Hogan initiates the Legdrop of Doom, Randy Savage can hit a flying elbow drop from the top turnbuckle, and whipping an adversary into the ropes lets Bossman catch his nemesis in the Bossman slam. In a couple of other neat features, the AI wrestlers all play similarly to their real-life counterparts, with Duggan liking straight up brawling and DiBiase using his relative speed to his advantage, and the grapplers make their entrance using the ring carts seen at Wrestlemania III & IV.

As well as keeping a careful eye on your and your partner’s health bars, each bout has a strict time limit. Both can be replenished at any time by entering extra coins, and you’ll want to do this, as reaching the continue screen requires you to begin the match from scratch. A second player can jump into the action as friend or foe, and even control the usually unplayable Andre and DiBiase if they insert credits during the main event fight. If you make it through to the second fight for the tag straps controlling The Giant and ‘Million Dollar Man’, you’ll fight the Mega Powers, Hogan and Savage, in a nifty nod to their real-life Summerslam ’88 clash.

The campaign features three bouts against random teams in New York City, followed by a showdown with Andre and DiBiase. Each contest features slightly different arenas and attires for the wrestlers, mirroring the weekly television shows. Once in the match for the tag belts, things get particularly tough; your best bet is to isolate the Million Dollar Man, as Andre will maul you in a fist fight, win most grapples, and is impossible to lift unless weakened. By sticking and moving with your strikes and bouncing Andre off the ropes it’s possible to take The Giant off his feet, and when he falls, he falls hard, giving you plenty of time to stomp him or try for a special. After being crowned champs, you play through the campaign again, this time in Tokyo, with the second playthrough being even harder than the first.

The graphics are good for the time, featuring large detailed sprites and big bright arenas that capture the glitz and razzamatazz of the period perfectly. However, Superstars had a rushed development, and it shows. While the sound effects are passable, the music is dire, lacking personality and melody, and not reflecting the action at all. The difficulty spikes all over the place, forcing you to either spend a lot of quarters or cheese your way to victory. While there are voice samples during an interview segment with Andre and DiBiase, they’re voiced by members of Technōs America. You complete the first playthrough and are congratulated on becoming tag team champs by Miss Elizabeth, only to find you’re challenging for the belts again on the second playthrough, with the same screen with Liz popping up. And there’s no high score table to speak of.

But at the time, the only thing that mattered was that here was a fun (especially with a friend) officially licensed WWF game. Technōs would go one better with WWF WrestleFest, released in 1991.