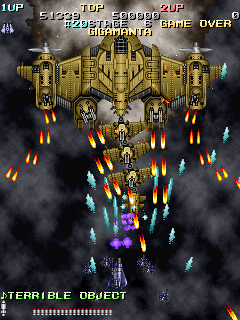 After the diversion of Armed Police Batrider, Battle Bakraid is the true sequel to Battle Garegga. It takes elements from Batrider and experiments with them, as well as including some new ideas. The biggest difference between the two lies in the art style. Battle Garegga was a smoke-stained vision of the 1940s, but Battle Bakraid drops this for a far more traditional futuristic war style. With Raizing having learned their lesson with Battle Garegga, the bullets are brightly colored, easy-to-see energy balls. In general, the graphics are decent, though not quite as detailed.

Battle Bakraid also includes a total of nine ships, although as usual most of them need to be unlocked with a cheat code. Instead of being limited to planes, you can also fly jets, flying wings, and strange looking aircraft that don’t even appear to be particularly aerodynamic. There is also an option for a Team Edit, similar to Armed Police Batrider. This leads to one of the best original ideas in Battle Bakraid. In Battle Garegga, you had two types of shots, your main shot and your option shot. There’s also a sub shot that can be leveled up. Each ship has a different sub shot, ranging from flame-throwers, to homing lasers, to missiles. You can really get a lot of firepower, along with up to six options that can be programmed. Additionally, the hitboxes are much smaller than that of Battle Garegga, making grazing much easier.

Battle Bakraid also has difficulty levels directly inspired from Armed Police Batrider, complete with that awesome boss rush mode from before. The rank system is back, but this time it starts in the middle, giving you some elbow room to work with raising or lowering it depending on your play style. Since it’s much easier to graze, it’s also far easier to decrease the rank, making it somewhat easier than Armed Police Batrider in general. That certainly doesn’t mean it’s an easy game. It will cover the screen in more bullets than any other game Raizing has ever made before, to the point where it almost feels like a Cave game. The charge shot and force field from Armed Police Batrider return too, though it’s much more powerful. The scoring system is quite similar to Battle Garegga, with the grazing aspect added in. Medals seem to drop more often, so it can be a bit harder to keep the chain going. Furthermore, if a medal drops off the bottom, you can restore your chain by not shooting anything else and grabbing the largest medal currently on the screen.

Most of the bosses are named after mythological beasts. Axebeak is a large bomber plane, while Bahamut is a tank the size of a building. These bosses have a habit of taking multiple forms and coming back even stronger just when you think you destroyed them. One of the coolest is Gigamanta, the boss that comes at the end of the cloud level, a stage already infested with powerful mini bosses.

Battle Bakraid may not be as original as Battle Garegga, nor as stylish as Armed Police Batrider, but it’s still a very high class game. Pity that, like its predecessor, it was never ported.