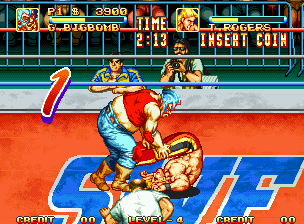 It goes without saying that SNK are well known for their fighting games. And rightly so – they made about twice as many of them as any other developer. Not only that, but many of their entries in that genre – like Samurai Shodown, Last Blade, King of Fighters, and Fatal Fury – rank among the greatest titles to ever hit the arcades. Combine those with their other games (Art of Fighting, anything for NGPC, etc) and you’ve got the most varied, most innovative selection of fighters made by any developer ever.

Logically, it seem like it would have been an easy transition for them into other combat themed games. Yet their other efforts into video game ass whooping are a bit mixed. There’s the highly regarded, but impossibly obscure, arcade exclusive 3-D fighter Buriki One, which tells the tale of a mostly grappling oriented MMA tournament, and that’s mostly remembered for having Ryo Sakazaki (of Art of Fighting fame) as a playable character. They also made about a half dozen or so beat-em-ups, ranging from P.O.W., to 8 Man, to Sengoku, but those were at best lackluster. On a couple of occasions – first in 1993, and a second time just before going bankrupt in 2000 – they also took a shot at the wrestling genre, producing two vastly different titles called 3 Count Bout and Big Bang Pro Wrestling.

3 Count Bout and Big Bang Pro Wrestling are SNK’s only two pure wrestling titles (They also made the wrestler-ish flavored kaiju battle themed games King of the Monsters). The first is a take on arcade-style wrestling games, whereas the second instead opts for the formula of Human Entertainment’s Fire Pro Wrestling series. Honestly though, the first is pretty horrid, but the second is actually among the better wrestling games out there. While they vary greatly in all other respects, both games have casts of ten wrestlers a piece. There aren’t any real wrestlers in either game, but they both have a few characters that are probably based on real people. Neither game has seen any ports, so they both remain pretty obscure.

3 Count Bout (Fire Suplex in Japan) was SNK’s first shot at the wrestling genre. It follows ten members of SWF (SNK Wrestling Federation) as they compete in the promotion’s big tournament, called SWF Wrestle Festival, in hopes of winning both the championship title and boatloads of cash. The game itself blows like nobody’s business, but the characters are half decent, so we’ll get that out of the way first.

In this corner, standing 6’1″ and weighing in at 284 lbs… if his long blond hair doesn’t prove that he’s American, then his patriotic pants sure as hell will… TEEERRRRYYY RRROOOOGGGERS!!!

In this corner, hailing from Mexico, standing 6’2″ and weighing in at 352 lbs… the masked, knife wielding, Blues… HAAAAAAAAAAABLAAAAAAM!!!

In this corner, from his native Germany, standing 6’6″ and weighing in at 297 lbs… you’ll recognize him from his bigass hair, but probably not from his total lack of character… ROOOOOOOOOOOOOOOOOY Wilson.

In this corner, coming from Canada, standing 6’3″ and weighing in at 247 lbs – the chain that he wields is almost as lethal as his giant mullet – Leo… BRADLEEEEEEEYYYYYYYYY!!!

In this corner, from Japan, standing 5’10” and weighing in at 250 lbs – he spits mist, he wears face paint, he’s Great Muta is sprite art form, he is… The Red… DRRRRAAAAAAGGGOOOOOONNN!!!

In this corner, from the country of Spain, towering over the horizon at 7’0″ and weighing in at 441 lbs – he wears a mask to hide his face, but can’t find a shirt that doesn’t show off his huge gut – GOOOCHACK BIIIGBOOOOMB!!!

In this corner, from his home country of India, standing 5’11” and weighing in at 200 lbs… the fire breathing, the loin cloth wearing, The GAAAANDHAARRAAAA!!!

In this corner, from Mexico, standing 6’2″ and weighing in at 352 lbs… he’s taken off the mask, but still wields his knife – yes, it’s Blues Hablam alright – BLUBEEEEERRRR MAAAAAAAAAAN!!!

In this corner, standing 6’8″ and weighing in at 360 lbs, from The Netherlands, or Holland, or whatever the hell you wanna call that place – the long lost third member of the Road Warriors – MASTEEER BAAAAARNES!!!

In this corner, from Spain, standing 7’0″ and weighing in at 441 lbs – totally NOT Gochack Bigbomb without his mask – BIIGG BOOOOMBEERRDERR!!! 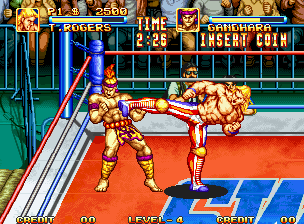 Despite being a pretty horrible game, it does bring some interesting things to the table. Besides being able to do all of the standard wrestling game maneuvers – striking, grappling, leaping from the turnbuckle, applying submission holds, whipping your foe to the ropes, fighting outside of the ring, running – you can also perform leaping drops when standing over downed opponents, kind of like in SNK’s King of the Monsters series. Your very-not-standard ability to jump means that you’ve also a couple jumping attacks in your arsenal. Similar to Saturday Night Slam Masters, you’ve got a health meter, but you can also win by submission or knockout, as well as by pin. 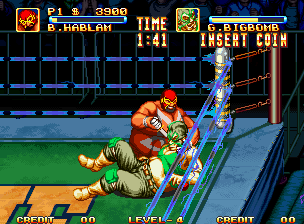 Every two or three rounds in the tournament you fight in either a street fight or a death match. The street fights have the two wrestlers brawling in either a parking garage or a construction site. In both stages you can leap off of things in the background, or bust up various objects to the far left and right of the arena by throwing the other guy into them. If you dent the cars in the parking garage then one of their owners will get pissed off and you can hoist him over your head and hurl him around as a weapon (!!!). The parking garage has barbed wire wrapped laced baseball bats, crates, and TASER’s to smack the other wrestler in the face, break over his head, or electrocute his ass. The death matches take place in a ring, but with electrified ropes and barbed wire laced baseball bats on the canvas. You can win any way in death matches, but you have to win street fights by knockout.

The game also sports some really excellent presentation. The music is good, and the graphics are on par with anything else that was out there at the time. The character designs aren’t exactly inspired, but the sprites are HUGE, and everything’s very well detailed. The wrestling moves are all well animated, the canvas actually shakes when you pull off a really big slam to the mat, the ring entrances are show in their entirety, there’s a cameraman wandering around at ringside snapping away, and you can even taunt by pushing Pin when not above a downed opponent. And then there’s this WAY over excited fan spazzing out to the right of the wrestler here…

Then you get to the meat and bones of almost any wrestling game – the grappling system – and that’s where the game completely falls apart. After entering into a grapple you have like half a second to mash the A button before entering the attack button/joystick direction combo for your move. Seems all fine and good – and it should be in theory – but the requirements to win a grapple are so ludicrous that you’re damn near guaranteed to lose EVERY TIME. You have to button mash faster than anybody should even be physically capable of and you have literally only about a half second to do it. So the CPU ends up winning – and I’m not exaggerating here – EVERY grapple, without fail. Any potential that the game has is killed right there. 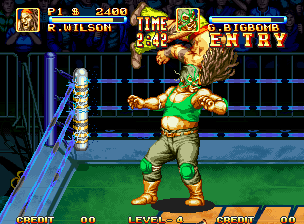 It gets worse. If you thought you could get around the grappling system by playing it like Saturday Night Slam Masters and relying on punches, kicks, and specials, then you thought wrong. Trying to play it like that will only make you run head first into the overly aggressive A.I., which puts the CPU right in your face non-stop. Should you try to confront them head-on, you’ll find that there’s a bit too much startup time on your standing attacks, which is only made worse by the fact that there’s a VERY stiff feel to both the controls and the characters’ movement. Meaning that you won’t be able to do much of anything with your striking attacks, either. Nor will you be able to effectively evade the CPU’s onslaught. Even if you try to spam running attacks or aerial maneuvers you’ll find that they’re far too easy to miss with, and if you do you’ll probably fall flat on your face. In short: This game sucks. It’s that kind of bad that transcends bad and becomes downright frustrating. If you can pull of the miracle of actually beating the game, then I commend you, but I sure as hell wouldn’t recommend trying. Nice going, SNK.

Luckily, there’s also a 2 Player mode – either co-op as a tag team against the CPU, or 1-on-1 against each other. The tag mode does exactly jack shit to alleviate all of problems that this game has, but the 1-on-1 mode is actually half decent. It obviously does nothing whatsoever to make the game feel any less stiff, but it does solve the major, major problem of the grappling system. So, if you’re a wrestling game fanatic, you’ve got a second player along for the ride, and you absolutely must try out every goddamn wrestling game ever made, then you’ll probably have a decent enough time fooling around with 3 Count Bout, especially if you’re also interested in SNK.