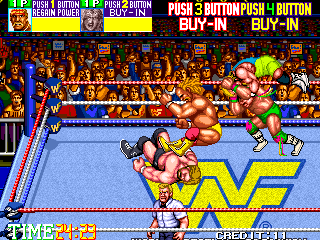 By late 1991, the first wrestling boom of the modern era was beginning to peter out, as enthusiasm for Hulkamania waned and Hulk Hogan’s would-be successor, The Ultimate Warrior, failed to catch on with fans. There were dark clouds on the horizon, too – a steroid trial involving the World Wrestling Federation (now WWE) loomed, threatening to make the whole business persona non grata.

It was into this climate that Technōs, creators of the fun but flawed WWF Superstars, released WWF WrestleFest. And what a sequel it is – dispensing with the problems of its predecessor while turning everything up to eleven, it’s the most authentic representation of the glamour and razzle-dazzle of American pro wrestling to this point. 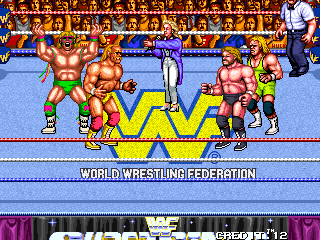 Hulk Hogan, Ultimate Warrior, Ted DiBiase, and the Big Boss Man all return from Superstars, and are joined by: 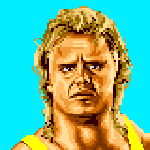 Mr. Perfect: As arrogant as he is deadly, Mr. Perfect finishes off opponents with his patented Perfect Plex. 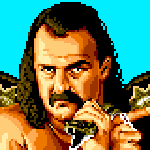 Jake ‘The Snake’ Roberts: Accompanied to the ring by his python, Damien, it’s lights out for anyone on the receiving end of his DDT. 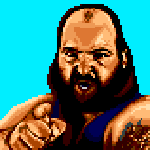 Earthquake: The largest competitor in the game, ‘Quake may be slow but makes up for it in sheer size and strength. 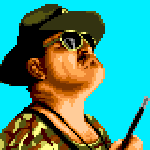 Sgt. Slaughter: This ex-patriot is now a Saddam Hussein-supporting villain who would headline 1991’s Wrestlemania, opposite Stars and Stripes-wielding Hulk Hogan. 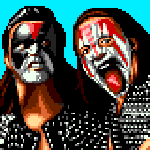 Demolition: The second incarnation of the face painted team is comprised of Smash and Crush. While you can only play as the complete team in tag mode, either can be selected for the Royal Rumble. 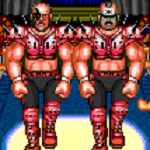 The Legion of Doom: The take-no-prisoners tag team champions have carved their way through the division. Can you stop them and win the belts? 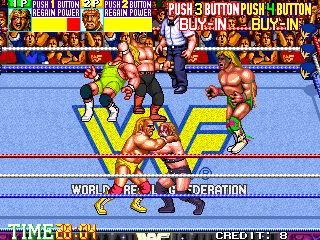 One of the first things you’ll notice is the improved presentation. Smeared with a cartoonish color palette, the arena features a constantly baying crowd and a ring filled with large detailed wrestler sprites that look even more jacked than in reality. Coupled with very good animation, it’s one of the very best examples of pixel art in a wrestling game, more fluid and authentic than 3 Count Bout, and with more weight than the later Saturday Night Slam Masters series.

The controls are similar to WWF Superstars, with a plethora of new features. Win a grapple and time your final button press just right and you’ll put your opponent into a headlock, where you can walk them to your corner to unleash a devastating double team headlock/double axe handle from the top rope. Other combo moves are available, be it holding your opponent down so your partner can stomp a mudhole in them, or pinning their arms behind their back while your buddy kicks and punches away. Even the Legion of Doom’s Doomsday Device is included, although it’s not possible to initiate it as a player.

If a partner is left on the apron long enough they’ll power-up and be able to unleash a string of unblockable stronger attacks once tagged in, in a cool risk/reward mechanic – if you’re on the receiving end of a beating, do you tag out now or wait until your partner is all fired up? Each wrestler has a more unique moveset, mirroring their real-life counterpart. Take too many big moves in a row and your character becomes winded, moving a lot slower as you desperately try to get to your partner. As before, you can launch your nemesis to the outside, this time being able to lay the smackdown with the signature WWF blue steel steps. New to the game are high score tables for both modes, based either on number of matches won during team play, or number of opponents vanquished in the Rumble. 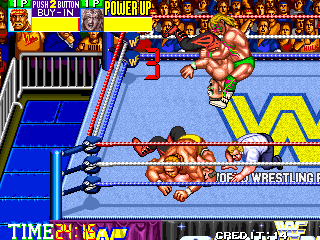 Superstars’ tag team championship campaign returns, with four fights until you meet reigning champs the Legion of Doom. In another new feature, the third fight will be inside the confines of the classic blue barred steel cage. Victory here is by pin or submission only, although you can Irish whip your opponent into the cage for extra damage. Each win bestows a little extra health, and you’ll need it: squaring off with Animal and Hawk is tough – they have double lifebars, and won’t hesitate to capitalize on any mistakes you make. Survive that, and the tag belts are yours, after which the campaign repeats once more with harder opponents.

But that’s not all: WrestleFest has an all-new “Royal Rumble” mode and, with the game now supporting up to four players, it’s the most fun you can have without donning spandex. Featuring up to six combatants at a time with a new wrestler entering after another is beaten, it’s your job to outlast every other competitor in the game. Elimination occurs by being thrown over the top rope, and in a deviation from real-life Rumble rules, pinfall or submission. In a nice twist, multiple wrestlers can dogpile onto a pinned opponent to try and gain a fall.

There are downsides; the music, while much improved, is still a bit weedy in places, and no real entrance themes are present. Thankfully, all voices are authentic, from Mean Gene interviewing LOD, Mike McGuirk ring announcing, and the familiar snarl of Animal and Hawk. There’s no one on one match, and no unique reward for winning either mode, with only a slideshow of wrestlers from the game to mark your triumph. The roster felt a little dated at the time: there’s no Undertaker and no Bret Hart, and, while it’s not really the fault of the game, there’s no Ric Flair, who defected from WCW to the WWF just two months after WrestleFest’s release. 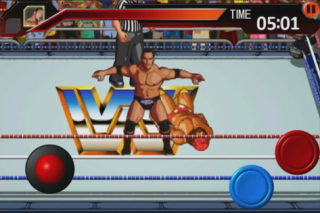 In 2012, THQ released the remake-cum-sequel WWE WrestleFest for iOS. It features the return of a few wrestlers from the original game, along with the likes of The Rock, ‘Stone Cold’ Steve Austin, Rey Mysterio, and the Undertaker, with further superstars and arenas available via DLC. It ups the amount of match types, too: one on one, steel cage, and gauntlet bouts are all here, along with a “Road to Wrestlemania” campaign mode, and online play. Unfortunately, the graphics are charmless and more akin to a flash game, the sound is a mess (with some sound effects not triggering at all), and a lot of your enjoyment is going to depend on how much you like using the finicky virtual joystick and buttons. Ports were in development for the Xbox 360 and PS3, but were never released.

But this doesn’t take away from the original WrestleFest, which was so beyond what players were used to at the time, and encapsulated the look and feel of an end of an era that is still etched into fans’ minds. While the gameplay is not as deep as the later Aki and Fire Pro games, it remains (especially with friends) a rollicking, slam jamming good time to this day.