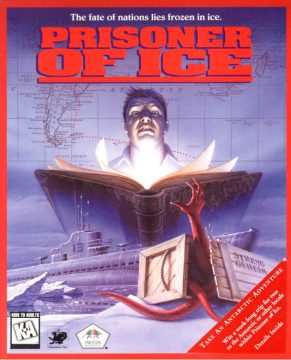 The year is 1937, and our hero is Lt. Ryan, an American in the British Royal Navy. During a mission in the Antarctic, the submarine HMS Victoria happens upon a piece of curious cargo. An attack upon the vessel causes the cargo to come loose, revealing a terrifying monstrosity that nearly spells doom for the entire crew. Upon their safe return, they learn that meeting these monsters – the eponymous Prisoner of Ice – was no isolated incident, as the Nazis seek to manipulate these demons in their quest for world domination. Although Prisoner of Ice initially seems unrelated to the previous Call of Cthulhu game, it is in fact a sequel to Shadow of the Comet, as Parker shows up about halfway through the game, having established a library in Buenos Aries, and becomes a primary character. The events during the Halley’s Comet appearance at Illsmouth also become a central event due to some crazy time traveling, which also sends Ryan into the future to see what the world would be like if conquered by the Old Ones.

Unfortunately, Prisoner of Ice totally disregards the very rule of suspenseful horror that Shadow of the Comet pulled off so well – that is, to never show the killer right at the outset, to let a sense of dread build over the fear of the unknown. Here, you see a prisoner right in the opening minutes of the game, where it kills one of your crew members (and you, if you’re not careful). There are similar situations spread throughout the game where you encounter one of the monsters and need to react in a timed situation, an annoyance lessened due to the autosave before any of these violent situations.

It doesn’t help that the prisoners just aren’t scary. Prisoner of Ice benefits from a high res SVGA graphics (standard VGA is also available in the DOS release), but the computer rendered sprites look awkward even at their best. The similarly rendered cutscenes are also dated, although at least the painted backgrounds look fantastic. Unfortunately the Hollywood rip-off character portraits are totally gone.

The game also utilizes a more standard point and click interface, lessening the headaches of Shadow of the Comet, but it’s drastically inferior in practically every other manner. The dialogue is sparse and the characters are ill-defined. Whereas in the first game you spent a good chunk of time uncovering the mysteries of the town, here you’re put through standard (and rather pointless) puzzles like figuring out how to climb a gigantic bookshelf. The only real saving grace is the story. Although the “Nazis seek strange ancient power” thing is a bit too Indiana Jones, the twists near the end keep the story from becoming too derivative. It’s also quite short and not particularly hard, which is both a plus and a minus – while it can be beaten in an afternoon, at least it doesn’t suffer from too much padding.

Versions of Prisoner of Ice exist for both DOS and Windows 95. It was also ported to the PlayStation and Saturn by XING and released only in Japan. Due to the low resolution of the consoles, the graphics are forced into visuals equivalent to the VGA version, and there are pretty substantial load times. However, only the text is translated, and the voices were left in English, making it mostly playable if you want to avoid any potential technical headaches with the computer versions. This version is subtitled Jashin Kourin, which translates to “Advent of the Wicked Gods”.