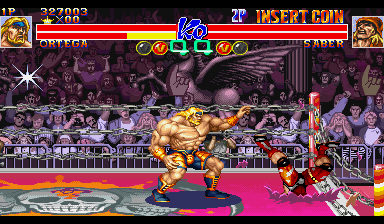 Slammasters II brings back each character from Saturday Night Slam Masters, and introduces four other playable characters. It also runs on Capcom’s more powerful CPS2 board.

What appears to be a highly disturbing effeminate male who isn’t averse to showing off some butt cleavage actually turns out to be a female wrestler posing as a male. Has a web projectile that draws her opponent slightly toward her (though not quite like Scorpion’s spear). Can crawl forward along the ground.

Capcom Wrestling Association’s (‘roided to the gills!) champion wrestler. Never lost a match. Appears in the intro to the original, but is only playable in the final game of the series. Possibly based on “Superstar” Billy Graham. Resembles Hulk Hogan, who also based his character on Billy Graham.

Definitely the creepiest wrestler in the circuit. A demon who has snakes in his body that he can attack with. Is he even human? Given his morbid theme, it’s possible that he is based on the Undertaker.

A soldier, or at least soldier-themed wrestler, who seems to be based on Bret and Owen Hart. Attacks with a shovel in several of his moves, and tosses around grenades as well to keep with his soldier motif. Wears a backless costume that reveals his butt crack. 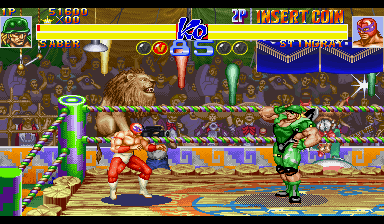 With the explosive success of the first Slam Masters both in the arcades and home console markets, Capcom was soon to bring back their muscley men to the ring with the official sequel, Ring of Destruction – Slam Masters II (or Super Muscle Bomber: The International Blowout in Japan). Much like the first game, the illustrations were provided by Tetsuo Hara of Hokuto No Ken fame, however this time his services were as made use of in character designs for the new characters introduced in this game, Black Widow, Rip Saber and The Wraith. These characters are suitably more abstract and outlandish than the other characters so far in the series, as expected from Hara’s designs. Additionally, Victor Ortega, the unplayable yet heavily featured wrestler from the first Slam Masters, actually debuts as a playable character here, and leads the team of CWA wrestlers against the evil BWA.

Despite the popularity of Slam Masters, this sequelmarks a huge departure from the first game, pitting wrestlers on a single 2D plane and allowing for no movement up and down the ring. Ring outs have also been taken out of the game, and perhaps most importantly, the match outcome is now fully determined by depleting the opponent’s health bar, taking out the pin feature entirely. In essence, Slam Masters II is much closer to Street Fighter II than it is Slam Masters and takes more inspiration from Capcom’s legendary fighting series than other contemporary wrestling games.

Since the wrestlers now only move left and right, the special moves have been increased per character, and are now more projectile based than before. The game does make use of irish whips into the ropes, which come in a variety of outfits from ropes to chains, but the wrestling part of Slam Masters II is severely toned down. 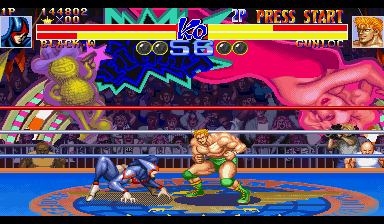 There are now four attack buttons, with two each for punches and kicks. Muscle Bomber Duo‘s grapple button has been retained, but it’s exclusively for grappling. Like in Samurai Shodown, your character can become angered after being hit several times, and their attacks are slightly stronger during this rage. It is also possible to rise from a fall faster by pushing Up & the grapple button. While the first game is pretty much devoid of combos, Slam Masters II allows for as much combos as would be expected from a Capcom fighter, and there is even a combo counter. It’s no longer possible to leave the ring, Team Battle Royal mode has been ditched, and submissions have been removed as well.

Despite these changes, grappling remains a major part of Slam Masters II‘s gameplay. You have also been given a move that allows you to dash in and initiate a grapple, allowing you to get in quickly and grapple opponents who stand back and poke or, as grappling can not be blocked, opponents who turtle. It is also possible to perform a Grapple Reversal by tapping the grapple button immediately after being grappled by a opponent. Even though most of Slam Master‘s other wrestler gameplay elements have been removed, most of the other moves have been retained. If you finish your opponent in any round with an in-grapple special, they will be driven through the mat. These non-fatal finishing moves are a nice touch, and were most likely intended to contend with the presence of fatalities in countless other fighters at that time.

While this might sound like a drastic drawback to the game, the actual mechanics and balance of the game is superb, and the controls much more responsive than its predecessor. The character animations and art are among Capcom’s finest in all of their arcade history, and it’s true marvel to behold. For true wrestling fans however, the letdown of its wrestling mechanics might be hard to overcome.

Despite the smash success of the first game’s portability to home consoles, Slam Masters II received zero home ports. This has not changed over the years, leading it to become largely forgotten and unknown. It’s not known why Capcom never attempted to port the game to any consoles, as most of their other arcade games, would eventually see release on either cartridge or CD based platforms. The arcade machine itself was also an obscurity, receiving only an official release in Japan and Germany, which a smattering of machines making its way around Europe.