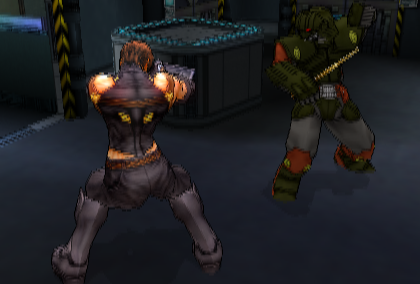 Often times, when discussing little-known (or little-liked) games of some merit, the phrase “diamond in the rough” comes up. Crimson Tears must be among the roughest; it goes back-and-forth between dull and exciting, confusing and interesting, involving and frustrating. At times, its design lacks common sense. It also achieves originality by bringing together two genres that are anything but: it’s a dungeon crawler and a beat-’em-up, an idea Dream Factory had been kicking around since Tobal‘s Quest mode but had never given the full-game treatment. 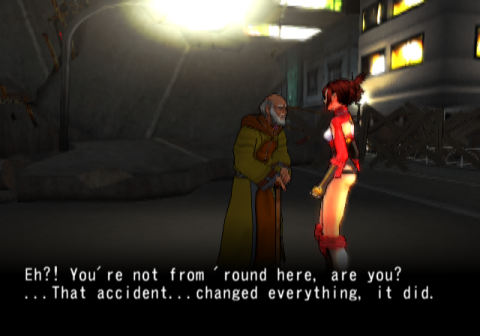 It’s no coincidence if they chose to go with cel-shaded graphics this time, as the story and characters bear a strong anime influence. The setting is 2049 Tokyo, where a large armament manufacturer, A.R.M.A., has been experimenting with robotics and genetics, producing humanoid soldiers with superior combat skills. This caused much unease and hostility among the population, until eventually… something happened. An accident? A riot? If so, who rioted? All we know when the game begins is this: a humanoid named Amber has just freed two others like her from pods deep into some high-tech facility, and the three are now searching for a fourth named Abel, along with a certain Dr. Kosugi. A woman named Lana, whom they know and trust, communicates with them telepathically, guiding them to various areas that have been been abandoned to “monsters”, some of which are really robots. They have made their base in an abandoned garage. In the basement is a large computer through which they can teleport to various locations and program new skills into their brains; outside lies a small, partly ruined city section where it’s always night. It has recently been closed-off by the authorities for reasons that aren’t quite clear, and those left behind hide among the rubble or walk around aimlessly, complaining aloud about missed dates and meetings. 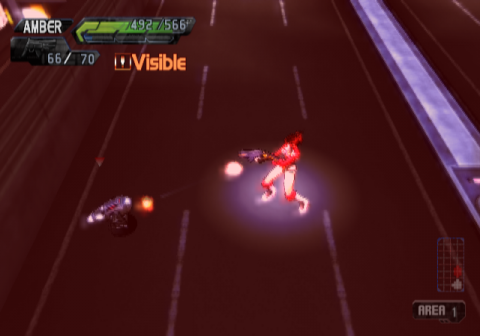 Despite the RPG trappings, the protagonists never talk to each other in-game; the narrative only progresses through the cutscenes. Though they rely on a fancier variety of cel-shaded 3D than the in-game graphics, they evoke some mid-tier ’90s OVA; trite dialogues, stylistic flair and a near-complete absence of exposition making the story intriguing despite its cliched nature. They are fully-voiced, the acting neither bad nor good. Those story scenes don’t take up all that much time; considering the length and difficulty of certain dungeons, you might go hours without seeing one. 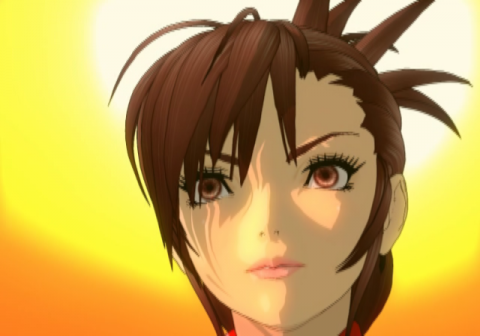 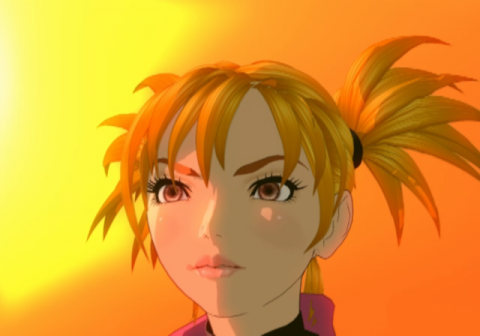 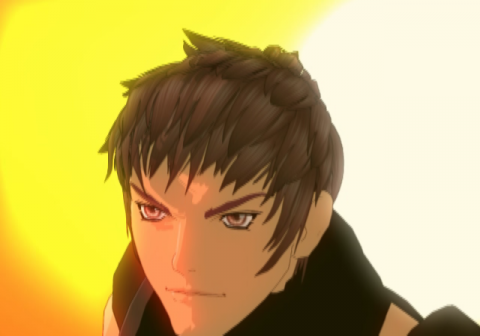 There isn’t much to the first monsters you’ll fight, and it’s easy to dismiss the game early on as dull and repetitive. What saves it ultimately is how distinct each monster’s fighting style is, forcing you to adapt and remain focused at all times, combined with the usual dungeon crawler appeal of amassing loot and building up your character. 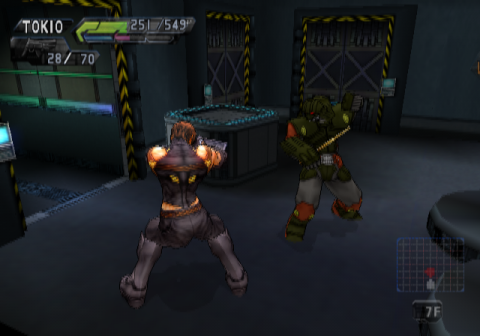 There are three means of attack. In close quarters, you alternate between hand-to-hand fighting and using weapons, mostly bladed. The latter are of course stronger, but they break easily, particularly if you fail to defend against special moves. On the other hand, weapons are relatively plentiful, and they level up as you use them, which both strengthens and partially repairs them. You have a heat gauge which goes up as you fight; if you overheat, your attack power increase significantly for a time, but your defense decreases and your HP begins to drop. It passes after a moment, leaving you near death. There are items to cool you down, but you can only carry up to 5 of any type at a time, so it’s something you must keep an eye on. There are two attack buttons that can be combined in various ways, as well as a Special Move button (or SPM in the game’s lingo), which can be used anytime but greatly increases your Heat Gauge; both attack chains and SPM are leveled up by using items that can be obtained from defeated enemies or given to you as a reward for completing sidequests. There also an area SPM, which raises your Heat Gauge by half and doesn’t level up. Finally, there are firearms, which differ from short range weapons in that they don’t break, level up, or cause you to overheat, though they naturally require ammo. As the game progresses, more and more enemies pack firearms, so much so that the game is almost a 3rd-person shooter at times. Any bullet that lands also counts towards combos, which greatly speed up the rate at which weapons level up as well as provide an Exp. bonus; a particularly inspired assault on a roomful of monsters, incorporating gunplay, fisticuffs and juggling can easily result in 20 or even 30 hits. Also of note is that sneaking up on an enemy unnoticed results in a powered-up hit which usually kills them instantly. 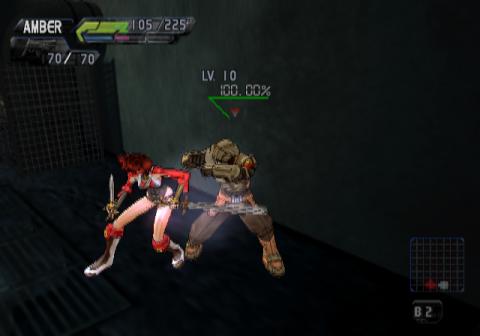 Each character has a specialty. Amber is the most polyvalent, and her low kicks are very useful against small enemies; she can wield dual swords. Though big and though, Tokio’s punches are fast and precise; he can wield dual guns, and is the only one who can use machine guns and grenade launchers, making him the most powerful character overall despite his limited choice of bladed weapons. The fan-servicey Kadie’s hand-to-hand fighting moves are limited and rather goofy, but she can juggle foes like there’s no tomorrow, and is the only one who can use claws, which are really gloves fitted with drills at the end, and buster swords, which are really Cloud Strife’s iconic weapon as it appears in Ehrgeiz. 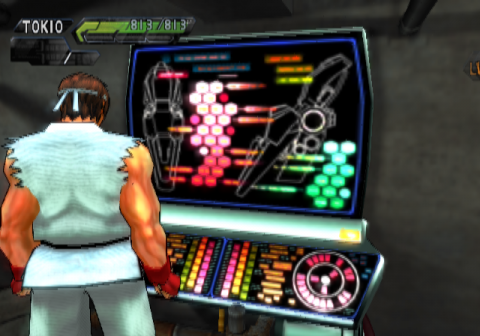 Defense-wise, you can block most regular enemies’ moves, and pressing square immediately after blocking an attack results in a near-instantaneous counterattack that sends enemies flyingaway. That doesn’t protect you from rear attacks however, and though you can spin around while blocking, that won’t help you if you’re surrounded. In those situations, and against most bosses, it’s preferable to Escape, which makes you invulnerable for a short moment. Of course, enemies can block too, and some of them can counter and escape as well. While the fighting is repetitive by nature, there’s a nice, snappy feel to the action, though one can’t help but wish some kind of grappling system had been implemented. 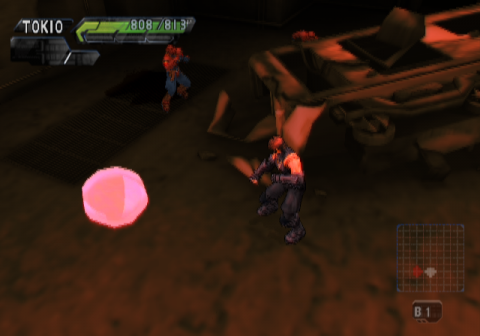 There’s a respectable effort at making the randomly-generated dungeons distinct, and in fact some don’t feel like dungeons at all. On the expressways, gunmen and robots are posted in large groups as searchlights float about; in the deserted city, wide streets are tied together by narrow alleys, landmines littered all about; portions of the mine are crumbling, and large machines stomp around, indifferent to who or what they trample. It’s possible to make clever use of obstacles to damage enemies, just as they are vulnerable to each other’s attacks. 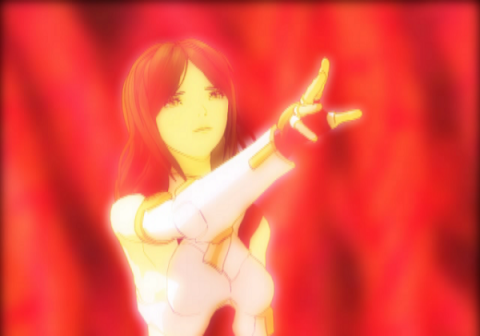 Should you die in the dungeon, you’re given the chance to select one of the other two character to go rescue the first, so that you can keep all your items and the exp you gained. To minimize tedium, you’re teleported directly on the right floor and provided hints, though you’re under a short time limit. Losing to a boss gets you a chance at a rematch as well, with the boss at 50% health; the backup character is not allowed to use items at all, however, making the battle nearly impossible. 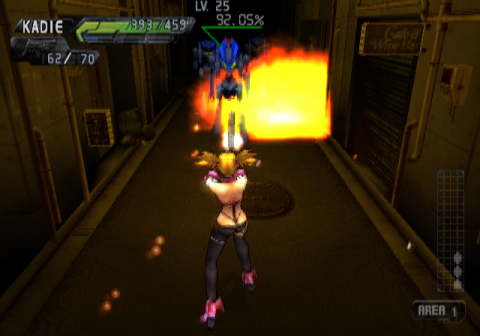 Some dungeons can be beaten the first time around if you remain focused, while others will almost certainly require return trips, and they get quite long. There are items you can find that allow a one-time save within the dungeon, and others that let you skip a floor entirely (most dungeons only have three or four), but this is certainly not a game for the impatient. As if to prove this point, the final level is a nine-battles boss run, with no possibility to save in between.

The biggest issue, though, is that the camera works in such a way that your character is usually centered near the bottom of the screen. This means that when entering a new room from above, or even from the side, you’re facing a room full of dangers you can’t see, as it sometimes happens in survival horror games. There are ways to deal with it, but the difficult situations that result from this feel unfair; it also undermines what should be one of the game’s strong points, which is that its more elaborate fighting system makes it possible for a player’s skill to overcome the dungeon-crawler / roguelike’s casual cruelty and random nature.

The city section looks pretty cool, but it’s quite small, and there isn’t much to do there; you can shop, talk to an handful of NPCs, combine loose parts into new weapons or give the Governor money to help fund the city’s reconstruction, which really only means that the shops get new items to sell. Post-game, there is an extra dungeon where all types of obstacles can be found, often in the same room, and everything is Lvl. 99. Among other things, you can find pieces of cloth there from which a certain NPC can make costumes based on famous Capcom characters, like Ryu and Chun-Li. 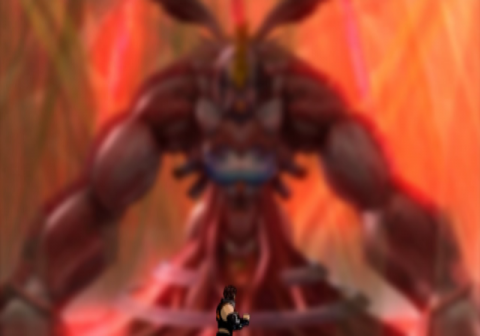 Crimson Tears was the last Dream Factory game based on an original IP, and their last to be released outside of Japan. Their final years would be made of manga & anime adaptations, budget releases and mobile games. Their very final product was, of all things, Toshinden‘s 2009 would-be revival for the Wii, a bitter end for a studio founded on the fighting game pedigree of its original members. Crimson Tears sure could have used a sequel with a lot more polish; instead, the closest thing was… 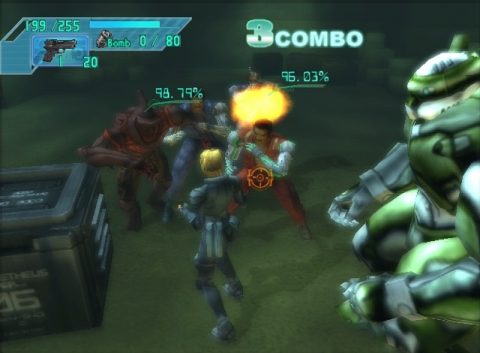 Based on the Masamune Shirow manga/anime, the Sega-published Appleseed EX uses Crimson Tear‘s engine, repurposed as a mission-based 3rd-person shooter. At first glance, it seems very hard, and possibly not very good.