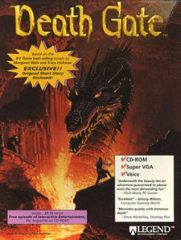 Based on the series of fantasy novels by Margaret Weis and Tracy Wickman, the folks behind the Dragonlance novels, Legend Entertainment’s Death Gate puts you in the shoes of a young Patryn named Haplo. Patryns are a humanlike race imprisoned in a world known as the Labyrinth, a harsh, nightmarish land where every day is a struggle to live. Miraculously, Haplo manages to escape and meets another Patryn named Xar, who had also managed the same task years before. Xar tells the story of a war between the Patryns and the Sartans, another human-like race that condemned your people to the Labyrinth. Xar wants retribution for the evils perpetrated against his people, and would gladly crush every Sartan in existence, except for one major hitch – the Sartans seem to have disappeared completely. Xar send Haplo out into the world to search for the remaining Sartans, and report back on his findings. 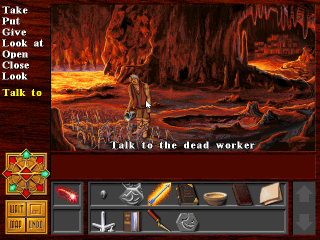 Aside from the Labyrinth, the world is divided up into four lands, each occupying its own floating island in space. Each of these islands is its own self-contained chapter, and there are usually a few major locations in each, which are accessed via Xar’s flying ship and selected via a map screen. The land of Arianus is based on the element of air, and is a mountainous region largely inhabited by a group of dwarves. Their job is to maintain a strange device called the Kicksey-Winsey, which burrows holes through the planet’s surface, which in turn provides water for the people. Said dwarves are also slaves to a group of elves, who have used trickery to disguise themselves as glowing gods. The land of Pryan, although based on the fire element, largely consists of lush forests. It is inhabited by groups of humans, elves and dwarves, which has led to some tight racial tensions. The land of Aberrach, based on stone, is a world filled with lava and death. Most of its remaining inhabitants are mindless zombies brought to life with the power of Necromancy. The final land is Chelestra, the realm of water, with a beautiful city that reveals the resting place of the Sartans. The final chapters involve Haplo returning to the Labyrinth to save the worlds – all of them – from total destruction.

Although Death Gate contains the usual elements of fantasy fiction – dwarves and elves, swords and sorcery, wizards and dragons – it’s far from a typical adventure story, which helps it stand out from Legend’s other fantasy titles like Companions of Xanth and Shannara. The mystery of the Sartan plays a large role in the story, and it’s clear even in the beginning that Xar’s intentions to destroy them go beyond a mere thirst for vengeance. All of the realms, while in varying states of disaster, show that the Sartans may not be nearly as evil as the Patryns have painted them, and once Haplo discovers a tomb filled with their bodies, hint that something may have gone dreadfully wrong somewhere. 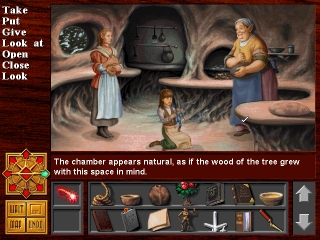 In telling the expansive backstory, there’s tons and tons of dialogue, in addition to history books and journals that further flesh out the world’s history. It’s well written and avoids the dryness inherent to some fantasy text, although sometimes it is overwhelming. The first fifteen minutes or so are spent as Xar elaborately explains the plight of your race, and it’s all too tempting to click right through it just to get into the game. Outside of Xar and his somewhat troublesome ambitions, the most interesting character is Zifnab, a Sartan who looks an awful lot like Gandalf. Despite his immense power, he’s largely confused and addle-brained, often believing he’s a secret agent akin to James Bond. (His pop culture references aren’t intended to break the fourth wall, seeing as the events of Death Gate are meant to take place far in the future of our own world.)

The look and feel is very similar to Companions of Xanth. Running in VGA, its visual style is very similar to Xanth too, although the CD-ROM version features higher resolution SVGA graphics, which look much better. Since Legend’s games evolved from text adventures, much of the action is told through narrative text, although the intro and ending sequences feature aged CG animation. 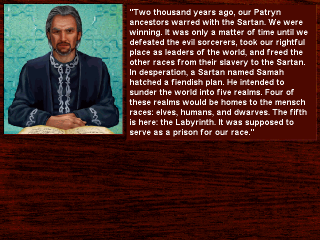 In addition to the usual inventory puzzles, Haplo is also a wizard and learns a fairly vast number of spells throughout the game. Some of these have simple uses, like the heating and cooling of objects or the possession of animals, while others are a bit more advanced, like one that can create a whole pocket of reality based on a painting. The magic in Death Gate is cast by assembling a series of runes into a pattern. Spells can be automatically cast by selecting them from a menu, although there are a few instances where you’ll need to look at the individual runes for the solution. There’s a single instance where you must make up your own spell by arranging the runes, which is rather clever, and the game could’ve used more instances as such. Otherwise, the puzzles are of fairly average difficulty. There are spots where you can die, and while the game features an “Undo” command, it’s not always very useful. There are a number of “timed” situations, where you need to complete certain actions in a specific number of turns, but since the “Undo” command can only rewind a single turn, you can trap yourself in an inescapable loop of death.

Death Gate is not based on a specific novel from the seven-book series, but rather takes aspects from the first four entries and creates its own ending, since the final book had not yet been published when the game was undergoing development. Since there’s so much compressed into a single game, it’s obviously missing huge chunks of the story and some of the characters are totally missing, but it’s a good way to experience a sizable chunk of the storyline in interactive form. Unlike some of Legend’s other games based off novels, it feels more self-contained, and you don’t really need any prior exposure to the books in order to really understand it, The retail package also includes a pamphlet containing a short story written by the original authors, which has very little to do with the game itself but fleshes out the Assassin’s Guild from the series, and is meant for fans of the books. Overall, it’s a pretty fantastic game, certainly one of Legend’s best, weaving an excellent plot and dense backstory into an extremely enjoyable experience.