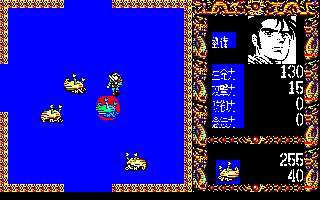 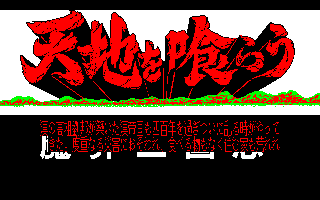 A year prior to Capcom’s release of Dynasty Wars and Destiny of an Emperor, a software company called Winky Soft developed their own RPG take on the Tenchi wo Kurau license. It’s very different from Capcom’s titles in the series, using an action RPG format popularized by early JRPGs like Hydlide and Dragon Slayer.

Winky Soft’s game borrows heavily from Dragon Slayer II: Xanadu. The overworld section only features a few shops, while the overhead perspective dungeon is crawling with enemies. After touching an enemy, a separate battle screen with multiple creatures attacking at once. Attacking uses the familiar bump system: keep walking into an enemy until they die. If enemies are moving toward you, they also attack, but if you manage to strike them while they’re moving away, they don’t. The game lacks the sense of exploration and deep experience systems found in Xanadu, rendering Tenchi wo Kurau a generally bland experience. Even so, the game does have a phenomenal intro sequence with fast-paced music and some great manga-inspired visuals.

Allegedly, an FM7 port was developed and never released. Winky Soft still exists today, creating games for a variety of platforms. They developed seminal the Super Robot Wars games, a few of which have seen an American release, and Zone of Enders: The Fist of Mars. Most of their work is published by Banpresto.