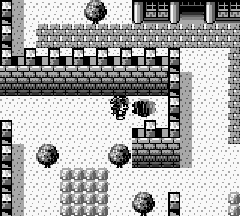 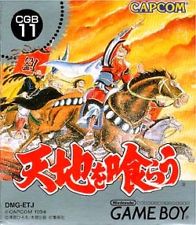 Despite many sources claiming that Tenchi wo Kurau for Game Boy is a port of the NES original, it’s actually a totally new game. It’s not even developed by Capcom, but instead Sun L, the developer responsible for the Game Boy ports of Gargoyle’s Quest II and Street Fighter II. Formed in 1992, they mostly developed Game Boy titles for Banpresto and Capcom, although they did develop a handful Super NES games including Mega Man Soccer. Even though only the three aforementioned titles ever made it out of Japan, Sun L was quite prolific, developing over twenty games in their four year tenure.

Released in 1994, Tenchi wo Kurau follows a similar storyline to the previous entries, but reshuffles things in interesting ways. Rather than starting with Zhang Fei, Liu Bei, and Guan Ye’s blood oath, you begin only as Liu Bei. The initial hour of gameplay involves finding his companions, joining up with the army, and destroying the Yellow Turbans. Quite a concise hour, and that’s how most of the game plays. 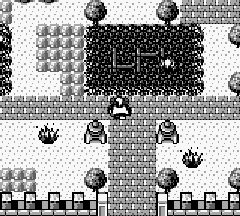 The first noticeable difference is that battles are now three against three rather than five against five. Army count still dictates strength, tactics are basically the same, and generals can be swapped in and out at any castle. One of the interesting aspects of the game is how long it delays some of these key features. For the first three hours of gameplay, tactics options aren’t available. Enemies have access to high powered fire spells after the introductory portion, so it’s interesting that this menu isn’t even accessible until so much further in the game. Still, you can’t even use tactics because you only have three party members who all have to be in the frontline, making it impossible to set a strategist. About half an hour later, generals join your ranks, finally providing the means to use tactics. This delay produces some of the game’s trickiest battles, but it never feels like the enemies totally over-power you.

As in Tenchi wo Kurau II, the player is often forced to remain in small areas of the world map convenient to the storyline. Unless the proper fetch quest is performed or the right warlord is spoken with, you’re forever trapped in an isolated mountain area with two castles. Eventually, the world opens up, but there are still times where no castle will allow you to enter unless you have business there. There are more dungeons than in either of the previous games, but they’re all the same. While slightly more interesting than those found in Destiny of an Emperor, it’s only winding corridor after winding corridor. What happened to the spinners and mazes of Tenchi wo Kurau 2‘s temple dungeon?

Overall, the game feels shoddily designed. Half the time bridges and forts can’t be crossed solely because the game doesn’t want you to. The game gives you access to some of the strongest weapons in the game very early on. While it’s difficult to come by 650,000 gold at this point, anyone with a high aptitude for gold farming can easily break the game. It’s the only RPG that Sun L ever developed, and it plays like it.

Still, it’s not a total waste of time. Regardless of Tenchi wo Kurau‘s problems, it’s more Destiny of an Emperor, and while not on the same level as SaGa, Last Bible, or even Oni V, a competent Game Boy RPG is always a treat.