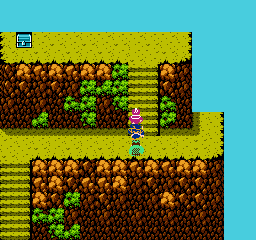 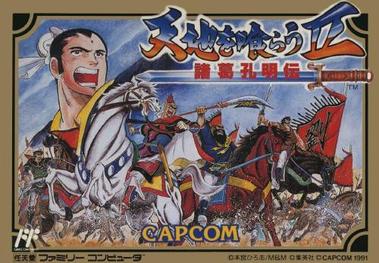 Released almost two years after the original, Tenchi wo Kurau II is hardly a rehash of the original game. The strategic battle system remains the core, but it alters several key design components to create a totally different experience. In general, the swift pace and playable character options of the original are sacrificed in many ways to improve the narrative.

Scenario writer is a key role in Japanese game development for a reason: most JRPGs aim to tell a decent story. One overused quote from Hironobu Sakaguchi states that he doesn’t “have what it takes to make an action game” and that he’s “better at telling a story.” Guys like Kazushige Nojima have made entire careers writing stories for video games, regardless of whether they’re good or not. Perhaps Final Fantasy VII was a success because of Nojima’s skills, and maybe Glory of Heracles 2 is better than most JRPGs because it has were-griffons. Either way, one thing is for certain: Tenchi wo Kurau II has a more detailed story, but it doesn’t make it a better game than the original.

Tenchi wo Kurau II‘s story is similar to Destiny of an Emperor‘s: Liu Bei becomes sworn brothers with Zhang Fei and Guan Yu, he becomes governor and then emperor, and he unites China. This time around, however, there’s constant upheaval. There are many more cutscenes in the game, with characters running on and off the screen to inform Liu Bei about some political problem. Someone always seems to be dying, invading, or warring around the area. For most of the game, Cao Cao, a rival force of Liu Bei in the novel, is constantly attempting to take over Liu’s land. Castles are taken, lost again, then re-taken at various points throughout the game. While the previous entry focused on moving in a linear path from castle to castle, things get a lot more complicated here. 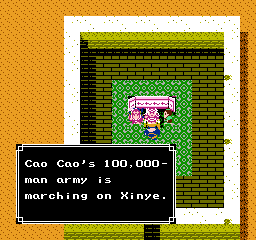 In Destiny of an Emperor, the walking speed would have made all the required footwork brief, but Tenchi wo Kurau II‘s walking speed is about five times slower. Not only does it take longer to walk between areas, but battles are inexplicably slower as well. Even the “all-out” option is slower than in the original, forcing you to watch little animations of the sprites slashing their swords, spears, and axes.

This wouldn’t be such an issue, but you often have to move back and forth between castles to accomplish different tasks. The worst early on is a path between castle Xin Ye and castle Xia Kai, which features a long forest dungeon in between them. On at least eight occasions, you’ll have to traverse this same, boring dungeon solely to accomplish one simple quest objective. It does help that the food system has been removed from the game, but you’re still constantly back-tracking, an odd situation considering how small the overworld areas are.

At key points in the game, the story will take you to an entirely different world map, making the continent of China feel more like a lot of small land masses than a continuous world. These areas only have three or four castles each, and while the game will occasionally let you take a boat to another piece of land, it only allows you to do so when it’s convenient for the story. Want to go back to Xin Ye to buy a piece of equipment there? Well, if you took a boat to Chai Sang, there’s no way you can get back until you finished all the required story objectives. Even if Destiny of an Emperor was rigidly structured, it felt more open than these tiny little islands with uncontrollable boats.

Even worse, the recruitment system that made the original feel so customizable is gone. For the first half of the game, random encounters feature zero generals. Most battles are against generic army units, with general battles relegated to key storyline events. About halfway through the game, generals begin to appear in random battles, but they’re not recruitable.

Characters will join your army as the story permits, and eventually you’ll have a couple dozen to choose from. The same Five Tiger Generals from the previous game, Zhang Bao, Guan Xing, Zhao Yun, Ma Chao and Huang Zhong are still the optimal group, although now all of the characters in the game receive more armies as you level up. The level cap has also increased, allowing you to reach a maximum army count of 9,999. This probably actually increases the customizability of your party as secondary characters like Wu Lan can grow a much larger army. Again, higher army counts make physical attacks much stronger, which the designers truly took to heart this time around. Boss generals are sometimes so much stronger than you that grinding becomes a necessity. 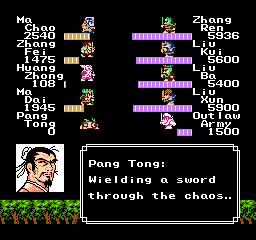 The graphics are largely the same aside from some nice background images added to the battle screens, but the music has taken a nosedive in quality. Instead of melodic numbers that occasionally have an eastern flair, the soundtrack is either stereotypical Chinese melodies or lackluster Mega Man tracks. The battle theme in particular sounds like a soulless version of Top Man’s stage music from Mega Man III. It makes sense that Yasuaki Fujita, the man behind Mega Man III’s soundtrack, worked on this game.

Laundry list of complaints aside, Tenchi wo Kurau II retains many of the features that made Destiny of an Emperorgreat and improves upon some, specifically in the battle system. One of the cooler additions to battles is the use of formations, similar to the use of front and backlines in other JRPGs. Formation changes consume tactical points and can only be done in battle, but they hold between battles until you reset the formation or a party member dies. He Yi sends the middle character to the front, Bai Ma sends the top three to the front, and so on. The characters in the back receive higher defense boosts while sacrificing physical attack power, while the frontline members reverse these benefits. Good usage of formation can make or break battles, although the strategic element is pretty straightforward: put the tactic users in the back and the heavy hitters up front.

Weapons are not character specific, which might sound like a pain, but it actually adds quite a bit of depth. Perhaps you want more party members who can use bows, special weapons that allow a general to attack the enemy twice. Maybe you want everyone to have ice sabers because they’re the most powerful weapon available at the shop. All you have to do is figure out which generals use these weapons and put them in the frontline. Although a couple party members can’t be put away for storyline purposes, customizing your party is given more of a purpose because of this feature.

Another interesting feature is the storyline battle, in which a variety of things can happen. Sometimes your head general will fight an opponent one-on-one and other times a party member will randomly appear to change the tide of battle. Multiple battle events involve Guan Ye joining the fray and either setting your opponents on fire or landing critical hits for massive damage every round. Many important battles are virtually unwinnable, but the story events will do something that puts the fight in your favor. While this remains an issue of narrative supplanting strategy, it’s much more interesting than discussions about politics.

The dungeons are greatly improved, excluding the obnoxiously linear forest dungeon mentioned earlier. Several mountain passes are littered with a variety of treasures worth exploring, and the Tomb of the Emperor is one of the most mind-bending dungeons ever conceived. Including massive floors, decent treasure, and a neat maze puzzle, the best feature are the spinners on the bottom floor, paying homage to the Wizardry series. If all the dungeons were as inventive and interesting, they probably would make up for the game’s shortcomings.

Unfortunately, they don’t. Tenchi wo Kurau II takes away too many unique aspects of Destiny of an Emperor only to make the game more generic and story-driven. Little information regarding the development team can be found online other than that Tokuro Fujiwara returned as the game’s producer. It’s probable that more staff members were shared between both titles, but so little information can be found online about either game that it’s difficult to say.

On February 1st 2007, Capcom ported Tenchi wo Kurau II to FOMA phones. According to various sources, it’s part of a service called “Capcom Party” that requires a small subscription fee of 315 yen a month. The screenshots online reveal graphics that rival SNES RPGs and that the port appears pretty faithful in terms of battle and story sequences. Living outside of Japan without a FOMA 900i phone, it’s doubtful that there will ever be any way to play this classy looking port.

A translation of the game was released way back in 2000. There have been occasional updates. It’s quite possibly the most professional fan translation available online.