In 1995, an unofficial Tenchi wo Kurau game was developed for the Sega Mega Drive/Genesis. The title screen says it was published by SKOB, a Taiwanese publisher of bootleg Mega Drive and Game Boy games and probably developed by a company called Chuanpu. Evidently two versions were produced, one in traditional Chinese text for sale in Taiwan and another in simplified Chinese for sale in mainland China.

The game has nothing in common with Destiny of an Emperor aside from the storyline: Liu Bei, Zhang Fei, and Guan Yu team up and eventually unify China. The gameplay mechanics have a lot more in common with the Final Fantasy games. There are conventional hit and magic points, an Active-Time battle system, and even a limit bar for stronger attacks. Either in homage or just to rip-off Square some more, the overworld song is “The Rebel Army Theme” from Final Fantasy 2. The only thing that differentiates Tun Shi Tian Di III from its inspiration are enemy encounters. On the overworld and in dungeons, enemies are visible, walking back and forth until you touch them. Once you do, it’s traditional JRPG all the way.

As in many Chinese bootleg RPGs, there are some severe balance issues that keep the game from being enjoyable. While the normal enemies are easy enough to defeat, the bosses are incredibly difficult, constantly knocking off half of the character’s hit points. The only real way to curb this is to grind, grind, grind and buy tons of items. On the second boss alone, minimum twenty-five health potions and a few resurrects are the only guarantee for victory. Grinding up to even stand a chance requires you to walk in and out of dungeons two or three times, defeating every enemy available, before finally having a reasonable chance. 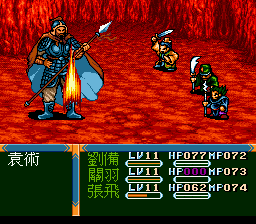 That’s the game’s formula: get a quest, grind a lot, and fight an incredibly difficult boss. Deviations from this formula occasionally pop up, but they hardly make up for all the frustrations. With countless better 16-bit RPGs available, there’s little reason to pick up this game unless you’re a huge fan of the Three Kingdoms setting. 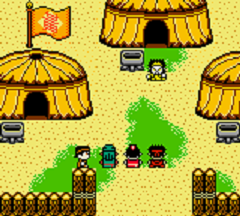 At some time between 1998 and 2003, a Game Boy Color port popped up. Developed by Vast Fame, a company comprised of many Chuanpu alumni, the game was retitled San Guo Zhi: Lie Zhuan and Shawu Story. It actually balances the battles quite a bit, ditches the active-time and limit bars, takes out the plagiarized music, and introduces random encounters into the game. Additionally, the overworld is now presented in the form of a map, allowing you to quickly teleport to key areas. If you need to play Tun Shi Tian Di III, head straight to the superior handheld version.