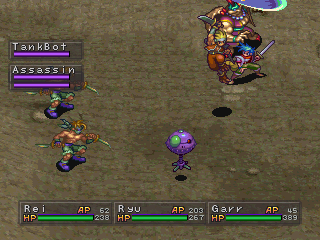 With the release of Final Fantasy VII, the world was changed. PS1 was now the ultimate machine and simply wiped the floor with all of the competition. RPGs went from occult to the hottest genre in gaming seemingly overnight. The entire industry changed almost as dramatically as it did with the release of the NES. Rather than continuing to support Nintendo, a lot of RPG franchises followed Square’s example of success and jumped ship to Sony. Included in this stampede was the Breath of Fire series, which made its 32-bit debut on the PlayStation.

Once again, Breath of Fire III takes place thousands of years after its predecessor. The dragon clan is all but extinct. The only remnants of the clan are their bones and chrysm; a mysterious crystal that forms when a dragon dies. This crystal is mined and used as an energy source around the world. One day, a group of miners stumble upon a large chunk of chrysm with a baby dragon inside. Breaking it free, they discover that the dragon is still alive. After slaughtering many of the miners, the dragon is finally captured and sent off on a train, but the dragon escapes, tumbling into the forest near the railway and passing out. The dragon, having reverted to its human form, another incarnation of Ryu, is saved and nurtured back to health by a pair of thieves, and their antics eventually get them involved in a sinister plot that will take Ryu and the player farther than they’d ever imagine.

Although still maintaining the warm feeling of the first two games, in order to relate better to its maturing audience, Breath of Fire III is a much darker game. But there’s ample comedy to balance it all out. There are some truly hilarious moments, like the scene where a naked Deis beats up Garr while a parody of Rocky III‘s “Eye of the Tiger” plays, and a scene with an evil dolphin that speaks in such an unintelligible, slang-ridden Aussie accent that an in game translation of his dialog is offered. The more serious moments of the game are driven by Breath of Fire III‘s much smaller, but more developed cast of memorable characters. 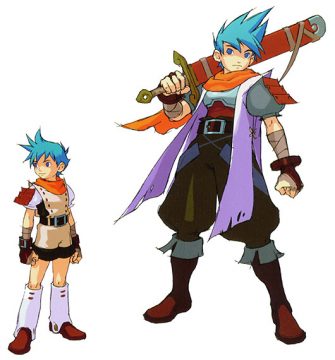 Ryu returns once again in a new incarnation. This time, however, he’s a little boy, and we get to watch him as he eventually matures into a man. As usual, Ryu can transform into a dragon, only this time he’s not aware of his latent abilities until much later in the game, and the means by which he transforms is much more advanced than it was in the previous games. Outside of battle, Ryu can slash with his sword in the field, slicing up shrubs that may contain random items and even people in towns who may drop gold. He is a thief, after all. 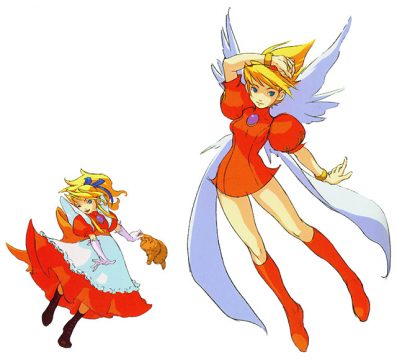 Nina also returns for Breath of Fire III, also in a new incarnation, and also a child this time around. Unlike Nina from Breath of Fire II, this Nina is a pampered, naive, air-headed princess that’s easily manipulated by less than savory types. This gets her into a spot of trouble, but Ryu helps her and thus finds his closest and most adoring companion. Unfortunately, Nina is a lot weaker both physically and mentally in this game, but her ability to shoot beams out of her staff is required at various points in the game. 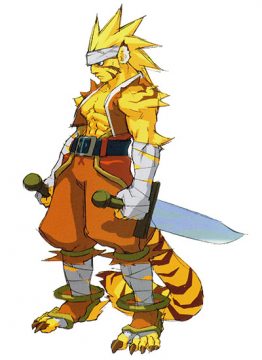 Rei, a Worren (a cat-person like Katt from BoF II) acts much like Bow from Breath of Fire II and gets Ryu and Teepo into a whole mess of trouble with his elaborate thieving schemes. Underneath it all though, he’s a nice guy just trying to get some food for himself and his friends. Unfortunately, this eventually leads to complications with the local mafia. In battle, Rei is by far the fastest character, and he has the ability to steal, making him a great asset early on. 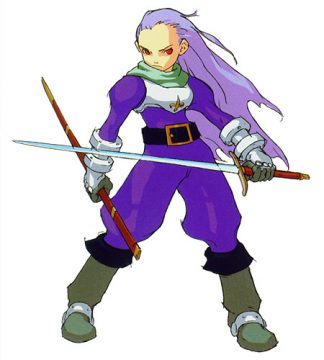 A young, feminine boy the same age as Ryu. Teepo was also found by Rei a few years before Ryu was in much the same manner. Teepo is quick to join Rei on his irresponsible quests to loot and ransack, but does so with a little more carelessness and is a lot more cocky. 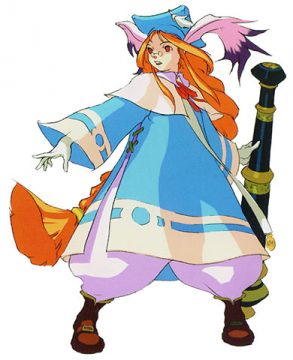 Momo is a very eccentric… rodent-like mammal, possibly a rabbit. Despite her ditzy demeanor, she’s a genius when it comes to technology, and is totally fascinated by the subject whenever it comes up. She’s constantly followed by a mysterious robot companion called Honey. In battle, Momo is quite powerful and knows much more useful spells than Nina, making her one of the better characters to keep in your party. 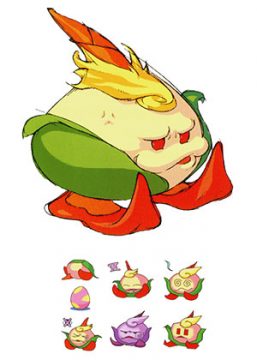 Peco is a strange creature that seems to be the last remnant of Spar’s race, capable of talking to plants and headbutting certain objects in the playing field. Peco remains quite a mysterious, and basically mute character throughout most of the game, and offers even less in terms of combat. 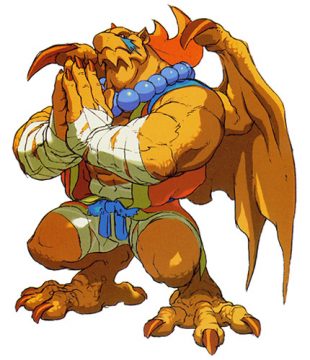 Garr is quite possibly the coolest character in the game. Garr is first encountered when he beats the snot out of you in a coliseum scene reminiscent to the one from Breath of Fire II. Later, for reasons that remain unknown for quite a while, Garr joins you and helps you escape the clutches of the mafia group that’s been pursuing you since the beginning of the game. 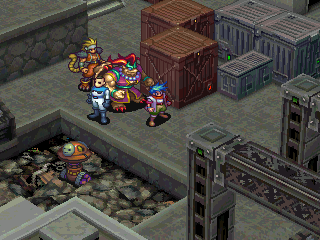 Unfortunately, Breath of Fire III ditches the shamanizing system that made Breath of Fire II so immensely enjoyable. Instead, Breath of Fire III runs on an entirely new skill system. Throughout the world of Breath of Fire III, there are “masters”, NPC characters that are highly skilled in certain arts that are willing to train you, usually only in return for something. Once a master will accept one of your characters as an apprentice, they will take on the attributes of that master and their level-up stats will be altered sharply. Some stats will be increased quite a bit, while others might raise very slowly with each level you reach. After a certain number of levels, the master will teach you a skill. A lot of the skills you learn early on aren’t terribly useful, but as you train more and more, the skills they offer will eventually become the mainstay of your battle strategies.

Masters aren’t the only ways to learn skills. Aside from learning skills naturally by leveling up, your characters can “watch” enemies and attempt to learn skills they use during that round. Not all skills can be learned, and your character wont instantly learn a skill the first time they see it. This practice takes quite a bit of patience, but it’s highly rewarding. Also, when a character learns a skill, either from a master or from an enemy, they can stockpile those learned skills into a skill cache at the main camp and distribute them freely to any character. This allows for tons of customizability, as there’s a horde of skills to learn and infinite ways to set up your characters.

Another new implementation to Breath of Fire III‘s gameplay is the Dragon Gene System, which is the new method of Ryu’s transformations. Instead of just transforming into a dragon for a single round and using a powerful attack, Ryu can transform into a dragon and maintain dragon form, suffering a loss of MP each round until he no longer has enough to sustain the form. To do this, you must find Dragon Genes, DNA samples frozen in chrysm crystals spread throughout the world. When you open up the Dragon Gene window in battle, you can choose up to three genes to splice, and with about two dozen genes, it’ll take quite a bit of experimentation to discover the effects of all of the possible combinations. 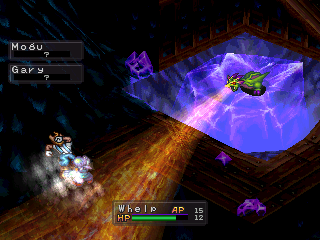 Outside of battle, Breath of Fire III is bigger and better than ever. The world is absolutely massive, and there is tons of history behind each civilization, making the world so much more absorbing and believable than the average RPG world. The dungeons are more puzzle-oriented than ever before, and a few of the great side-quests from the older games return. Once again, you can build your own town. Only now it’s a town strictly for faeries, and the functionality of the town is a lot more restricting and less rewarding than the town system from Breath of Fire II. On the other hand, the fishing game in Breath of Fire III is far, far improved, and is so deep, fun and involving that it could practically constitute a separate game in itself, with dozens of different fish and baits to catch them with.

Graphically, Breath of Fire III goes a totally different route than most of the RPGs that jumped into the 32-bit world. While most RPGs like Final Fantasy, Chrono Cross, Legend of the Dragoon, and so forth went for 2D backgrounds with 3D character models, Breath of Fire III opts for 3D backgrounds with 2D character sprites, more like those of the later released Xenogears. Only Breath of Fire III looks infinitely better than Xenogears. The polygonal backgrounds are beautifully detailed, the camera is tight and can be moved when characters/objects are obscured, and the sprites are simply gorgeous with some of the most fluid animation I’ve ever seen to this day.

Breath of Fire III also sports a pretty decent and highly varied soundtrack. Most of the themes from earlier in the game are upbeat and inspire feelings from the previous games with a bit more of a jazzy feel. As the game goes on however, the tone of the music changes for the darker along with the story. The contrast between themes like Casually, the first world map, and For the Dragons, the bone-chilling main theme is almost immeasurable. When all of these elements combine, you end up with what is quite possibly the best RPG on PS1, or in the 32-bit generation, period.

With the success of the GBA ports of the 16-bit Breath of Fire games, Capcom continued their handheld ports of the franchise, repeating the Nintendo-to-Sony jump they made back from the console days and releasing Breath of Fire IIIfor the PSP rather than the DS. Aside from some new box-art and more muffled music thanks to the PSP’s tiny speakers, it’s very much the exact same game that it was on the original PlayStation. It was only released in Japan and Europe – SCEA kept it out of America, but since the PSP doesn’t have a region lock, you can just import the European version, as it’s in English. This was later released as a downloadable title on the PlayStation Network in North America.

Cameos, References, and Other Nonsense

Pocket Fighter – The PlayStation version of Pocket Fighter has a pseudo beat-em-up mode with long, horizontally scrolling stages. Most of the cast from Breath of Fire I-III appear in one of these stages.