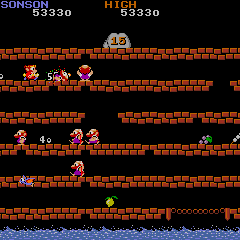 Much of Capcom’s early output was dominated by shoot-em-ups, and most of these – Vulgus, Exed Exes, 1942 – were standard fare, based on the success of Namco’s Xevious. But wedged in there is a weird little game called SonSon, a side-scrolling shooter with characters from the famed Chinese Journey to the West story. Like many early Capcom games, it was designed by Yoshiki Okamoto, the ex-Konami designer who would later direct Final Fight and Street Fighter II. The name is a cute multi-level pun – the main character is the grandson of Son Goku, the monkey hero of the old tale, so he’s the “son of the son”. Plus, the kanji used for “son” in “Son Goku” (孫) also literally means “grandson” in Japanese, so it works in a few different languages.

The game begins with the little monkey SonSon and his friends traveling West to visit Buddha, when three of his pals are kidnapped by the Great Devils. With only himself and his buddy TonTon (a cutesy pig rendition of Zhu Bajie/Cho Hakkai), they set off to rescue them, while still continuing their journey.  The opening message is “Let’s Go Tenjiku”, referring to the old Japanese name for India. 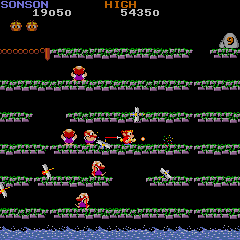 SonSon looks like a side-scrolling platformer, but it really plays closer to a shoot-em-up. Your characters wield projectile weapons, and the screen auto-scrolls – however, they cannot fly, only jump between the six floors on the screen. The floors also occasionally have gaps that you need to look out for. The enemies flood the screen within seconds, each coming in waves and having unique behaviors – the standard Deku enemies just shuffle around while their more advanced counterparts, the bearded Burigan, also toss spears. There are also fish that jump from the sea at the bottom, and bats that fly in a typical sine wave pattern, as well as dragonflies, which pause for a few moments before zooming straight at one of the player characters. Other enemies include spinning skull coins, which don’t do much other than blocking the way and absorbing a few hits, as well as occasional attacks by the Great Devils, who are the toughest foes in the game. All of the enemies behave predictably – even the regular enemies jump between floors in rhythm, so once you get their timing down, then they’re easy to avoid. But obviously when you’re dealing with two or three waves of these at the time, that’s when the action gets pretty hectic.

Progress is indicated via numbered stones at the top of the screen, starting at 19 and counting down to 1. At occasional intervals, the screen will stop scrolling and you’ll need to take down a fortress, consisting of warriors that hide between doors, which need to be destroyed before you can attack them. Unlike some endless arcade games of the early 80s, there is an actual finale where you meet Buddha, though it’s pretty brief and the game begins the next loop right afterward. 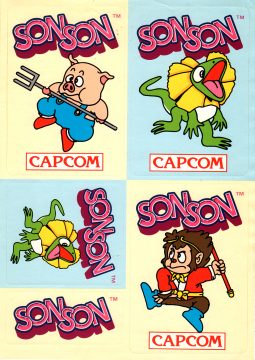 As with many arcade games, scoring takes a big part of the action – beyond killing enemies (and their projectiles), you pick up fruit and other food items (which include french fries, corndogs, and tempura friend shrimp) to gain points. After grabbing six “small” foods, a single “large” food will appear, which has a much higher point value. If you fail to grab certain large food items, then helpful lizards and birds will jump in and drop a replacement worth half of what the missed item was worth – in other words, a nice consolation prize. Other items include hidden bamboo shoots, as well as “POW” icons (using the same design as many Capcom games) which will turn all of the enemies on the screen into carrots. The core gameplay involves fending off enemies while attempting grab as much food as possible, which is much harder than it looks since the screen is constantly scrolling, and jumping between floors actually takes a bit of time. So there’s a hectic sense of risk/reward through nearly every second of SonSon, which makes it extremely gratifying to play even though it’s otherwise pretty simplistic, with repetitive backgrounds and no additional weapons.

There are a few quirks to keep in mind. Your shoots only reach about half the range of the screen, so you actually have to get relatively close to attack them. There’s also a brief delay before jumping between floors, so you need to think ahead, because you can’t dodge things instantly. 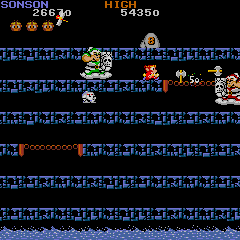 SonSon only saw sparse distribution out of Japan and wasn’t nearly as popular as in Asia, perhaps due to the fact that few Westerners were familiar with the characters. (Even decades later, most non-Asians really only know the Journey to the West story through heavily altered adaptations like Dragon Ball.) Which is unfortunate, because it’s a fun little game, that’s both challenging and rewarding. And despite the stark backgrounds, the visuals are cute, and the theme music is also pretty catchy (it even has lyrics listed in the Famicom manual).

The only contemporary port was for the Famicom. Developed by the infamous Micronics, it looks okay in still pictures but it’s absolutely dreadful in motion. Things get off to a bad start when even the intro scene, where the Great Devils kidnaps the party, is filled with flicker. During gameplay, the action also slows to a stutter whenever enemies show up, which is often! The scrolling is so messed up, even the numbers on the stone markers are misaligned.

There is also a mobile port, which lets you play as the kappa character seen in the introduction. Based on Sha Gojyo and given the name SuiSui, each of the three characters have slightly different abilities – SonSon being the balanced character, TonTon having the greatest strength, and SuiSui being the fastest.

SonSon also appears on Capcom Generation Vol. 3, along with other early Capcom games Exed Exes, Vulgus, and Pirate Ship Higemaru. This are mostly perfect ports, though the PlayStation version is full screen and the Saturn version is pillarboxed, the latter due to not supporting the necessary low resolution. This release was bundled together with volumes 1, 2, and 4 and released together in Europe for the PlayStation. The game also appeared on Capcom Generations Vol. 1 (for the PS2/Xbox) and Capcom Generations Remixed (for the PSP), which were released in North America. It also shows up on the Capcom Arcade Cabinet, released digitally for the PlayStation 3 and Xbox 360. This version includes an added “casual” mode with various tweaks to make the game easier, including the ability to extend the reach of your bullets. These versions are all emulated and they’re pretty much arcade perfect.

There is technically a sequel, dubbed SonSon II, released for the PC Engine. However, it’s actually a heavily altered port of Capcom’s arcade game Black Tiger, using the same cutesy Journey to the West characters. So from a gameplay perspective, it has nothing to do with the original game. However, SNK’s Psycho Soldier plays similar to the original SonSon, utilizing the same platforming/shoot-em-up hybrid, and adds extra features like additional weapons and bombs. 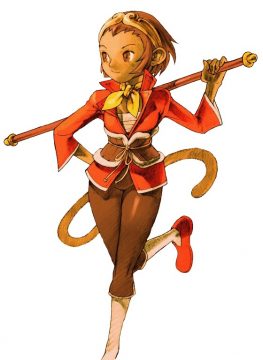 SonSon in Marvel vs. Capcom 2

For a long time, SonSon was completely unknown to Westerners, despite the character occasionally making cameos in other games, like in Chun Li’s stage in Super Puzzle Fighter II Turbo. The game only became a little more well known thanks to Marvel Vs. Capcom 2, which introduced a new character named SonSon. This is actually the granddaughter of the hero from the arcade game (since the original character was male), which in turn also makes her the great-great-granddaughter of the original Son Goku. Like many of the variations of this character, she attacks with Ruyi Jingu Bang staff, and rides into battle riding a cloud. (She also has a super move where she turns into a gigantic ape.)

http://www.thegaygamer.com/2016/04/manual-stimulation-capcom-sonson-famicom.html – Source of the manual scans, include the full manual 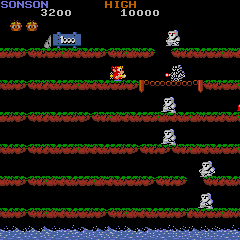 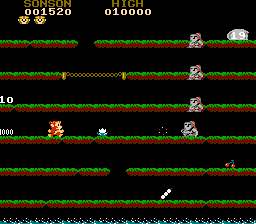 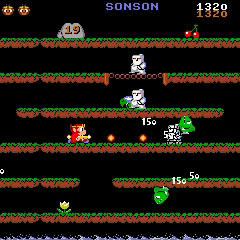