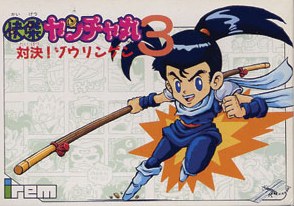 While the second Yanchamaru game only contained the barest essentials from the original arcade game, the third entry, also released solely on the Famicom, may as well be part of an entirely different series. The art style has changed one again, looking less like a typical wide-eyed manga and more like a comic strip, a look that’s actually quite unique. The enemies keep up with the weirdness from the previous game. One level features little boy statues that fire water out of their man bits. Another is filled with flowers that wield revolvers. Another is a funny little man wearing what appears to be a long coat, and then “flashes” you with a missile. The boss battles feel a bit like Mega Man, with a similar looking room design and enemy patterns that may as well be stolen wholesale. Even the final boss, the Stone Wizard once again, pilots a machine that may as well below to Dr. Wily. 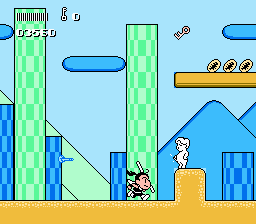 Yanchamaru no longer wields a spinning blade, but instead has a bo staff. It can shoot (fairly weak) projectiles, but you can also use the pole to catch onto walls and platforms, and use them to somersault in the opposite direction. The staff can also be used to hit switches, and is also used as a paddle in the underwater segments. Most of the special power-ups from the second game are gone, although there are still plenty of bonus coins to collect. As opposed to the straightforward left-to-right stages of the first two games, the levels in Yanchamaru 3 are divided into short sections guarded by gates. You need to find a key before you can proceed, which are usually easy to find.

Yanchamaru 3 has a lot of good things going for it, especially with the unique ways to use the staff. It’s still easy, although not as insubstantial as the second game – but the big problem is that it’s programmed terribly. Even though the graphics looks decent in skills, the animation and scrolling is choppy, and the action is more floaty than it should be. It’s not enough to ruin the game, but it does make it feel cheap and shoddy.

Daiku no Gen-san 2: Akage no Dan no Gyakushuu
Night mode