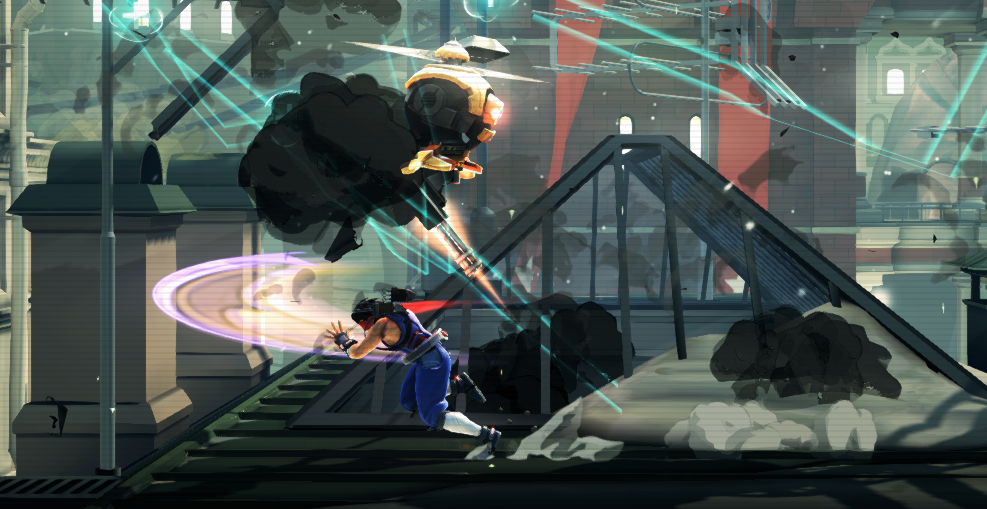 Strider was basically dead again after the release of Strider 2, and it took more than a decade for Hiryu to return as a character in Ultimate Marvel vs. Capcom 3. It was nice to see him back in some action, but it wasn’t quite as delicious as a full-on revival. Grin, the developers of the fantastic Bionic Commando Rearmed and the less-well received 2009 reboot, were in talks to bring Strider back, but the studio was disbanded before this could come to pass. 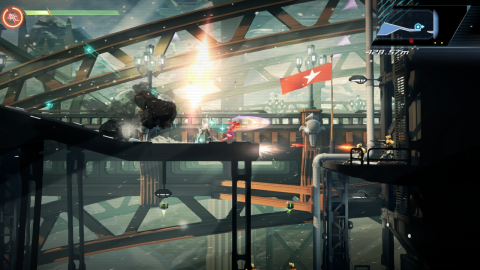 So who would have expected that Double Helix, the makers of several lukewarm games like Silent Hill: Homecoming and Front Mission Evolved, would team up with Capcom’s Osaka studio to resurrect Strider for real? Considering the American studio’s track record, it would not be unnatural to feel uneasy about how they could make a respectable modern Strider. Yet, in spite of the precedent showing what happened the last time a Western developer worked on the series, the end result has turned out to be just about everything longtime fans could have hoped for. 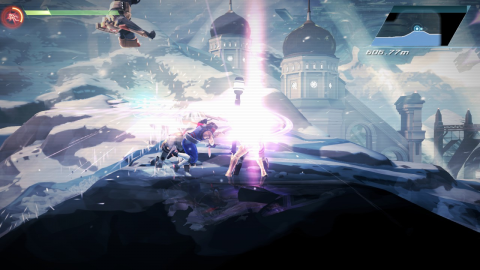 Strider takes the best elements from all three main games: the plot and atmosphere of the arcade original, the free-roaming stage design of the NES game, and the fast-paced gameplay of Strider 2. Essentially a self-contained reboot, the story is familiar, where Hiryu infiltrates the city of Kazakh to assassinate Grandmaster Meio. The action takes place entirely within Kazakh this time instead of traveling around to Egypt or Africa, but the city itself is a massive metropolis full of baddies to slice and goodies to grab. To prevent navigation from ever becoming a chore, an objective arrow tells you where to go for the main events, but you’re encouraged to look around for helpful items (like health upgrades) and fun things (like concept art and different costume colors). 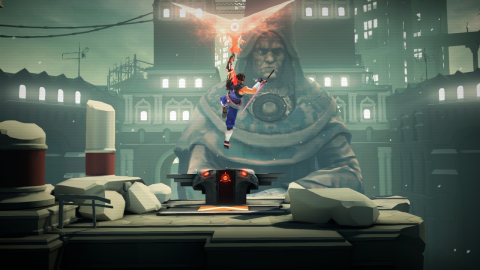 Most of what you need to progress can be found on the path, with Hiryu gaining upgrades to make him a better fighter and explorer. An early addition is the charge strike, a mechanic never seen in the series until now that allows Hiryu to break barriers and enemy shields. Not found too long after is the down strike, which enables him to crash through floor grates, and his three Option helpers from the original game return, not only as powerful attackers, but also as keys that allow him to access normally unreachable locations. With other powerups like elemental cyphers and throwable kunai, it’s safe to say Hiryu’s more badass than ever before. 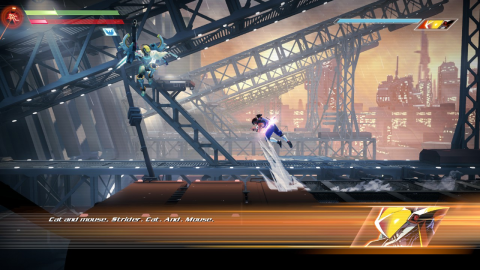 Of course, you can’t just traipse around Kazakh without alerting Meio’s imperial armed forces. The basic soldiers serve as fodder for the first few areas, but troops start toting sniper rifles and missile launchers in an effort to up their Strider-killing game. You can’t go anywhere without running into automated propeller guns and stationary turrets, and after being introduced as a midboss, ape-like heavy troopers pop up semi-frequently. While you face a handful more enemy types, you’ll be squaring off against soldiers and turrets 80 percent of the time. There could be a little more common enemy variety, but the fantastic boss fights more than make up for the mooks. 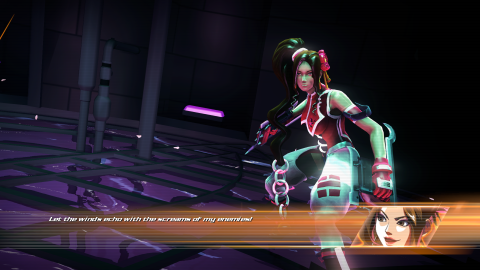 The first major fight is against Ouroboros, a massive cyberdragon with the familiar name of the original Strider‘s first big boss, but the actual fight against it is reminiscent of Emperor Dragon in Strider 2, flying through the sky while scaling its body to slash at the tubes on the back of its head. Several familiar faces return to antagonize you, including Solo, the Pooh sisters, and General Mikiel, who now looks more like Zangief than Gorbachev. Each fight is intimidating at first, but you will eventually learn how the bosses operate and crush them with enough observance, and having an itchy cypher finger doesn’t hurt. 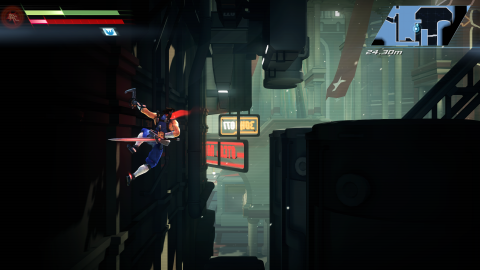 While Strider is much bigger than any of its predecessors, it’s also an incredibly simple game to grasp. The mechanics are easy to learn, you’ll never get lost with your objective arrow, and you can mow down enemies without mercy or stopping. It’s arguable that the game’s a bit too easy outside of the boss battles, but you have three difficulties to choose from before starting your game, and you take a fair chunk of damage from enemy fire in hard mode. It’s a slight spark more challenging than your typical Metroidvania, if not the hardest game of all time, but who cares if it’s no sweat for action game veterans? Strider Hiryu is back. Those are four satisfying words to shout considering how long he’s been in limbo. 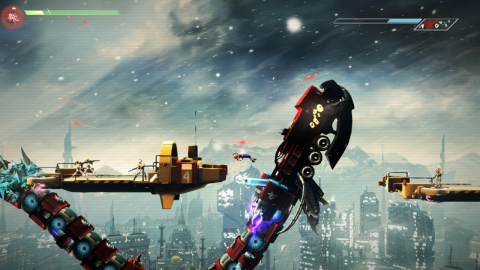 Not only is Strider‘s return fast and fierce, but it also looks fabulous. All character models look quite decent, even though you’ll usually be zoomed out far enough to make out the really intricate details. The true eye candy is in the backgrounds, depicting Kazakh as a colossal urban nightmare coated in unforgiving snow. When you first land in the main city square, a ghastly statue of Meio looms over all else. The residential district shows fancy quarters with large chandeliers in the main halls, and the construction site exhibits giant girders spanning far into the background. A fitting soundtrack accompanies this atmosphere, remixing several old tunes from the arcade and NES Striders as well as tossing in some new jams. While nothing award-winning, the sound design blends in smoothly with the rest of the package. 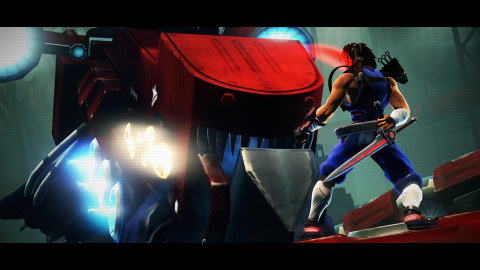 The only fault is the unfortunate imposition of a “point of no return” that doesn’t allow you to keep your save file once you beat the game, which seems counter-intuitive to the explorative nature of most Metroidvanias. Still, it’s one hell of a ride. 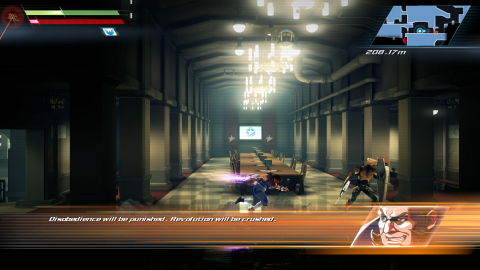 While the release was digital-only in North America and Europe, Japan received a physical edition for the PS3, along with a limited edition with an artbook, soundtrack collection, and other knick knacks. All versions are basically identical, though the PS3 version only runs at 30 FPS.