The third and final installment of the NES trilogy brought a few greater changes regarding the theme as well as aesthetics. In the intro to this final episode, you watch Irene being killed by… Ryu Hayabusa? But, no wait, it was a clone. The plot is a tad more detached than in the first two games, and now instead of humans, animals and demons, your enemies are machines and mutants. The graphical style has changed to a flat perspective in contrast to the slightly isometric view that the previous games featured, but overall the visuals have vastly improved, with bigger and more various enemies, vertical scrolling and very detailed backgrounds, with quite a few parallax layers and lighting effects. The cover art now took the same style as the Ninja Ryūkenden anime, at least on the Japanese box. A lot of tasks were shifted from the creator of the series, Sakurazaki (real name Hideo Yoshizawa) to former artist & cutscene creator Runmal (Masato Kato), with Sakurazaki only staying as the game’s executive producer. It’s easy to tell from playing the game alone that someone else was in charge. 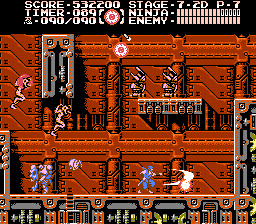 So it’s no wonder the gameplay underwent a few greater changes as well, probably inspired by newer contemporary games like Strider and Shadow of the Ninja. The general pace of the action is slowed down, particularly because Ryu is given much more airtime during jumps, which sadly doesn’t feel quite right. Also, the hand-over-hand climbing on bars from the arcade game is back, and Ryu now can climb onto higher platforms directly without having to wall-jump. 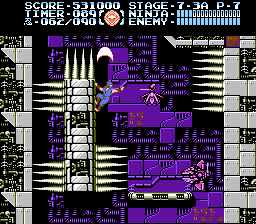 Furthermore, a new major special item is introduced with the sword upgrade, which greatly enhances your range and makes it possible to hit small or lower enemies without ducking. The Phantom Shadow fighters are gone for good, as is the ordinary shuriken, so that you now start every stage with the powerful Windmill Shuriken equipped. The ability to shimmy below platforms goes along with a new weapon tailored for such situations – a pair of energy blades that attacks enemies immediately above and below Ryu’s position. The item orbs are now transparent, so there’s no fear of accidentally collecting bad weapons anymore. The greatest novelty of them all – the enemies no longer respawn infinitely – makes for more tactical combat, since a retreat now actually can better your situation. Ninja Gaiden III is also the first game that provides a password system in the original release on the Japanese Famicom. 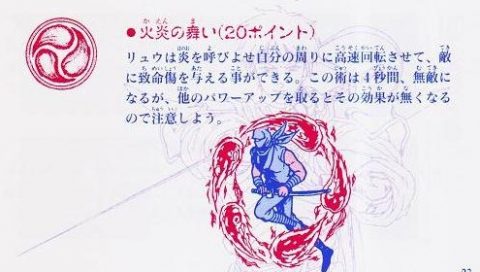 A page from the Japanese manual.

If you think all this will make your life easier, then think again. No respawning of enemies is made up by their sheer numbers, and the levels are full of traps like quicksand, moving or collapsing platforms and slippery ground.

The Japanese version actually is a bit easier than the first two Ninja Gaiden episodes, especially with the included password system. Fearing that longtime fans would be disgruntled (or perhaps just to prevent kids from beating it in a rental), the North American version was made considerably more difficult. Enemies’ damage levels were raised, so that almost every enemy hit draws two points off your life bar from the very first stage on. Plus, the locations of extra weapons have been rearranged, and you get considerably fewer weapons. The Invincible Fire Wheel is very rare, and you have to hold out much longer without the sword upgrade on most stages. And if all the obstacles finally get the better of Ryu, you don’t restart in that same area, but the beginning of the current stage. The password system is also gone, and now for the first time, you are limited to 5 credits. After that, it’s time to start from scratch again. All this makes it the hardest of all Ninja Gaiden games and quite frustrating, and it is strongly advised to choose the Japanese or Trilogy version instead. 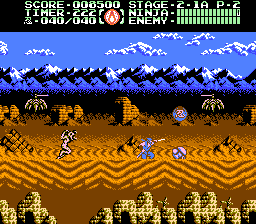 Alas, this final game of the series never saw a European release. At that time, games tended to come out in Europe one or two years after the Japanese or American games, Ninja Gaiden II wasn’t released before 1992, and before someone could even think about bringing over its sequel, the NES was irrevocably outdated. 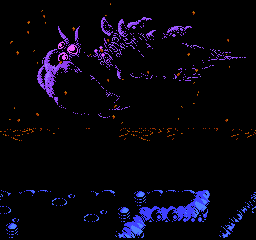 With Ninja Gaiden III getting ported to the Atari Lynx, now every one of the NES games was ported to a different non-Nintendo platform. This one is actually the most faithful port of the three, which is also its biggest problem. The graphics are just scaled down to the handheld’s lower resolution, which means it’s hard to recognize anything on screen. For some reason the positions for the attack and jump buttons were switched around. Although this doesn’t do any actual change to how the game is played, it may prove confusing to players that are used to the regular button order used in the vast majority of 2D action platformers. Otherwise, it generally retains the good gameplay (though it is the tough, sometimes unfair gameplay of the North American version), so if you get eye cancer from playing it, you’ll at least have had a good time.

The Trilogy port this time gets along without censorship (but there weren’t any pentagrams/stars of David to begin with, thanks to the new theme), but otherwise it’s the most retouched of the three games, and sadly not quite for the better. It’s missing most of the graphical effects, the parallax-scrolling is completely gone (interestingly, it was still present in the Trilogy version of Ninja Gaiden II), as are a few lighting effects. At this time, they probably ran out of cartridge space or something like that, and so they took out at least two music tracks and replaced them with repetitions of other stages’ tunes instead. Why does a Super Nintendo game have to be technologically inferior to a NES game? 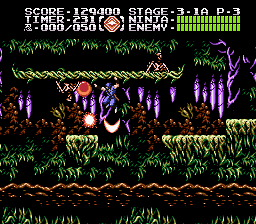 As kind of a compensation, though, it sets the damage level of all the ordinary enemies back to a single point, making damage even lower than the original Japanese version. Unlimited credits and the password system are also back, of course (they should have fixed the last act of Ninja Gaiden I, while they were at it). In turn, for some reason the American NES version’s arrangement of extra items and restart points was used, which actually made the game a bit harder for Japanese players in the end, while kindly relieving some of the hardships Western gamers had to endure. 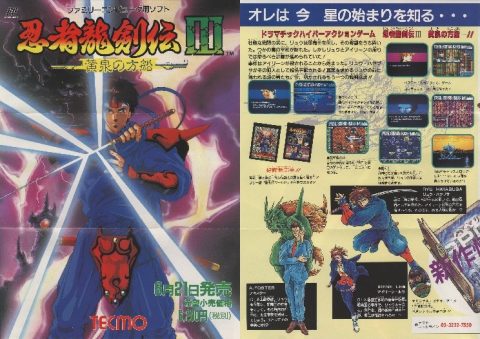 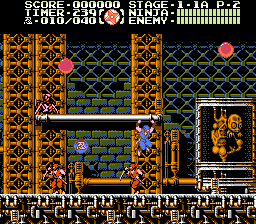 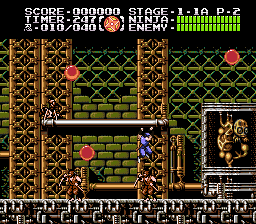 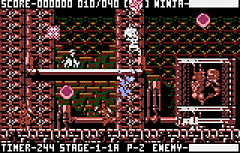 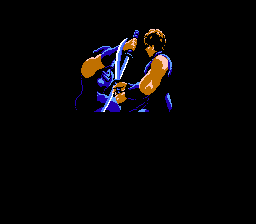 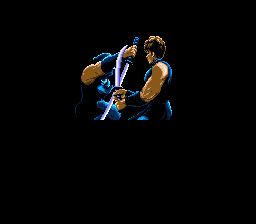 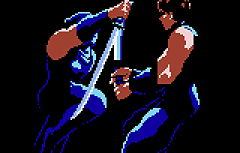