When the hero of Argool made his debut on the NES, it was an entirely different venue from the arcade game. At first, it did not seem too different from its predecessor, what with the opening section being a strict side-scrolling affair and those damn rolling caterpillar thingies still prevalent. However, Rygar takes a hit, and… oh, what’s that in the upper-right corner of the screen? Why, it’s a life meter! Rygar can take three hits before he folds, according to those little red dots up there. Well, it’s nice that the game’s a little easier, but is there anything else that sets it apart from the arcade title?

Gamers would soon realize that almost EVERYTHING is different from the arcade game. 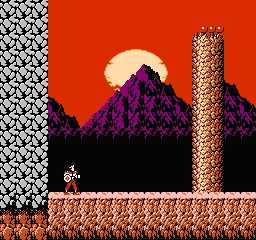 The main exception is the basic storyline, which doesn’t matter that much. Argool is in trouble, as Liger, the evil lion-headed scourge of the land, has stolen the Door of Peace. Rygar is to defeat the villain and open the Door for all of Argool’s creatures to walk through and into a better tomorrow… or something like that. He has to traverse the land in order to reach Liger’s fortress of solitude, which just so happens to be floating in the sky. So, Rygar has to find and consult the five Indora gods in order to find a way up to the foul sky where Liger’s palace floats. 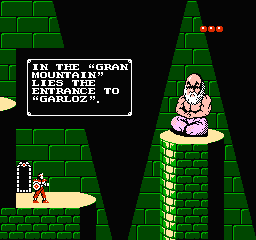 Incidentally, the story highlights a disconnect between naming conventions between the arcade game and the NES game. In the arcade game, the final boss was supposed to be named Rygar…but “Rygar” and “Ligar” are spelled the same in Japanese (ライガー) due to the lack of differentiation between “L” and “R” sounds. The hero of the Japanese versions is supposed to be unnamed, but he became known as Rygar instead in the English versions. This came to be a problem in the English NES version, where you have both the hero and the villain fundamentally having the same name, just romanized differently. The Japanese subtitle, Hachamecha Daishingeki, translates to “Ridiculous March”. It was advertised as a sillier, more cartoonish version of the arcade game, even though the actual product is nothing like that. 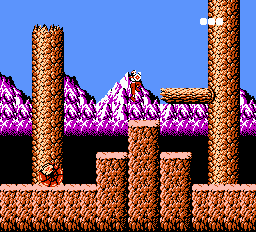 The core gameplay is what really evolved the name of Rygar towards its status of fame. This was a time where some gamers grew restless of the typical “Go right and kill stuff” formula that many action titles abided by.  This certainly isn’t the first, as there are a number of other similar titles on the NES, like Metroid, Castlevania II, and The Goonies II, but Rygar still stands out thanks to its cool weapon, inventory, a large interconnected nonlinear world, and all that jazz.

Rygar’s only weapon throughout the entire game is the Diskarmor. He doesn’t gain any other methods of attack, as all the other items in the inventory are for reaching certain areas or bolstering his defense. It seems fairly weak at first, taking at least two hits to obliterate even the wimpiest of enemies, but the more asses you kick, the stronger Rygar becomes. If you destroy more enemies, you’ll soon find the D-armor tearing through bad guys with relatively little effort. Rygar’s constitution increases too, as destroying more monsters add to the total number of life points in the upper-right screen. 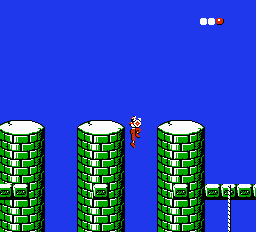 There are also three spells that Rygar can implement to keep him alive. They can be utilized in conjunction with star points. Every now and then, an enemy will drop either one or two star points, and a maximum of seven can be held. With three star points, Rygar can “Power Up” and increase the speed, range, and damage of the Diskarmor. It stays with him until he dies, so it’s highly recommended to activate the Power Up right away. Five points activates the “Attack & Assail,” where the next ten presses of the B button will cause a flash that hits every enemy on-screen. This can be quite useful to attack any pesky flying or shooting enemies, and it does make boss battles a tad less painless. Finally, a maximum seven points can “Recover” all of Rygar’s life points. This is only to be used in the direst of situations. Even if there isn’t much magic, it’s certainly enough to get by. 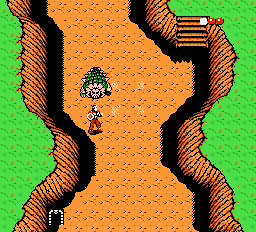 Not unlike Zelda II (or even Snake’s Revenge), there are two different perspectives of action in the game. One is the standard side-scrolling 2D setup, and the other is a birds-eye overhead view where it is possible to move north and south. Garloz, the “main hub” area of the game (which is pretty much interconnected with most of the other areas of Argool) is seen from above, but most of the land is in 2D, except for Dorago’s Palace and Ligar’s Castle. It cannot all be accessed at once, however. Rygar needs items from the Indora gods that can help him advance to higher plateaus. Such items include the Grappling Hook, where he can climb straight up to ledges, the Wind Pulley, which enables him to climb safely across ropes, and the Crossbow, with which he can make climbing ropes on his own. Rygar can also stay alive with mini-potions that are dropped randomly by enemies and restore one life point, and he can also receive Life Potions for his inventory that recover all life when activated. The Coat of Arms is required to get Life Potions, though. There is also armor that can reduce the damage Rygar takes. The last item that will be obtained is the Pegasus Flute. Use it in the right place, and the path to Liger will show itself! 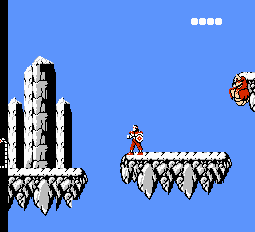 There is a fair amount of irritating backtracking to do, but not so much that it evolves into pure tedium. However, when Rygar grows to be very strong, it may get a little boring to effortlessly dispose of the enemies while advancing to the next area. The overall challenge of the game is fairly easy. There aren’t any cheaply frustrating moments or legions of enemies trying to rush you simultaneously. The control is dead-on tight, and save for a few tricky jumps every now and then, it’s easy to maneuver the Ry-Guy around. The bosses, although strong, are relative breezes once you figure out their simple patterns. You’ll know you’re fighting a boss when there’s no music, but a weird-ass roar constantly sounding off. The overall balance of the game is fair, if not leaning a little bit on the easy side. 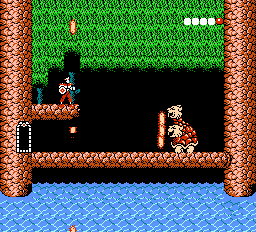 There is a downside, though it’s a fairly long game, usually taking around an hour to beat under ideal cistcumstances, and it doesn’t have any type of battery backup, or even any passwords. So if you want to beat Rygar, but want to go to lunch and you’re jumping around the floating islands of Lapiz, you’ll just have to leave the NES on and come back later.

There’s something about that bright sun and the crimson sky in the beginning part that’s just entrancing. It’s a recurring theme in all Rygar games, and for a title from the mid-’80s, it’s gorgeous. The graphics are fairly good overall. It’s nothing too spectacular, but 1987 was still fairly early in the NES’s lifespan, so it was good design for the time. The sprites are animated well and display some interesting enemy designs, such as the evil trees and crazy egg-dropping dragons that fly overhead. Some of these are taken from the arcade game, another one of the elements carried over. Rygar himself must be a distant cousin of the Belmont family, what with his lack of a face and snow white complexion shared by Simon Belmont from Castlevania II, but at least he has decent animation. The stages look rather neat as well, with one of the coolest being the floating islands of Lapis. It’s kinda frightening to think that the pits you jump over don’t lead to a dank pit, but a place on terra firma that’s a million miles below you. 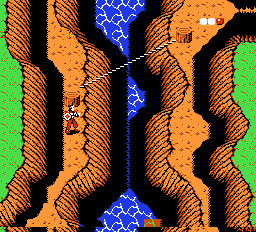 The music is excellent, particularly the super-cool melodic composition of the underground cavern section. It can get repetitive at spots though, particularly the mind-numbing tune of Dorago’s Castle. It’s just the same four notes over and over again. The music is actually a bit different in the Japanese version, plus some of it is carried over from the Dr. Jekyll and Mr. Hyde NES game.

Maybe Rygar does seem a little basic and bare-bones compared to later action-RPGs, but for 1987, it’s mighty impressive.  Rygar did just that while staying within the limits of the NES, and the result greatly overshadows the arcade game. The name of Tecmo would become a household favorite over time, and soon enough, gamers would trek all over Argool and marvel at the large world and all of its beastly inhabitants. It was titles like these that helped the NES totally whomp the Sega Master System and Atari 7800 in console sales.