In Sexy Parodius, Takosuke has drafted his fellows to begin a work-for-hire agency in a quest for riches, power, and world peace. Of course, this mostly means that his subordinates do all of the work while the lecherous octopus sits in his office and fantasizes about legions of women folk. 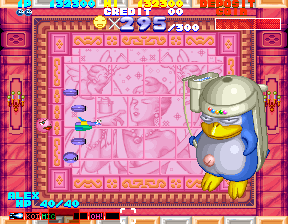 The Parodius games have always leaned on the easier side of the spectrum (compared to Gradius, especially), so Sexy Parodius gives each stage an extra challenge, usually a certain number of items to collect or enemies to defeat.  Meet the requirements and you’ll advance to the “A” stage; fail and you’ll go to the “B” stage. The final level is a little bit different, in that you’re on a timer, and need to advance through a cavalcade of core barriers in a short period of time. If you’re too slow, Takosuke will escape with his pile of money and prematurely end the game with a lousy ending; get to the end and you’ll get the good ending. (Per usual Gradius standard, there is no real final boss – the gigantic naked lady as seen back in Parodius Da! ends up squashing Takosuke with her ample posterior.)

A single playthrough is only seven levels long, but there are nine stages altogether, and a special epilogue if you manage to win on all of the levels. While it’s still quite easy overall, it lends to the replayability to see the different areas, and view the wacky cutaways at the end of each stage that change depending on the outcome. (Win the bathhouse level and the crew will attempt to sneak a peek at the women’s bath; lose and they’ll be flushed down the toilet by the boss.)

The levels and bosses are some of the best the series has seen – one stage is a bathhouse along the lines of a Gradius-style high speed zone, which climaxes in a fight against a giant penguin wearing a toilet on his head. Another is a gothic castle filled with troublesome rodents, ending with a battle against a gigantic Medusa head. (Although the game does not generally reference other Konami titles like Jikkyou Oshaberi Parodius, the Castlevania influence is clear, as the music makes some references to it.) One stage is a factory that is stealing bunny girls and boxing them up, for some inexplicable reason. The boss of the mine level is a tremendous tanooki with an enormous nutsack. (The game helpfully instructs “Don’t Shoot!” unless you want to trigger some nasty attacks.) There’s also another boss rush against old Parodius bosses (there’s a picture of a naked woman in the background, which is slowly revealed as you destroy more foes), and the final level is a lavish, pink, Indian-style palace.

Sexy Parodius runs on the same arcade hardware as Gokujou, but it’s a substantially more attractive game, one practically bursting with energy and sight gags. Ultimately what makes the experience as memorable as it is are all of the tiny details packed into each level. The first stage takes place on a farm, with dancing flowers, milk jugs spewing out flying cows, mountains that bounce around the scenery, and an utterly gorgeous pastel backdrop. There’s an extraordinary amount of color painted throughout each and every corner.

Additionally, the bath house stage has floating tubs in the middle featuring various girls, each with their name scrawled on the tub. (Except one, which has a balding muscular man named “Catherine” apparently.) Further, you can find the little karate guy from Yie Ar Kung Fu in all of his 8-bit glory, punching harmlessly at air. (You can be a jerk and knock him over.) You’ll also come across UFOs that explode and leave behind a point value in an old school font.

The sound, too, maintains the excellent standards, with each character now having their own voices when enabling power-ups, adding even more to their personalities. The music also keeps up the usual silliness, with the sugarized version of “Battle Hymn of the Republic” being the standout.

Many levels have tiny little panels embedded in the scenery with penguins doing all kinds of goofy stuff. Pay attention in the bath house and you can see boy and girl penguins fooling around in the bathtubs, or male penguins staring up at showering human females. In a warehouse, you can find a leather-clad penguin whipping her subordinates, who seem to be enjoying it (if the little hearts flying out of them are any indication). The final stage is an ode to hedonism, with troupes of female penguins caught in eternal pillow fights. (It also begs the question – if blue penguins are boys and pink penguins are girls, then what are green penguins? Eunuchs?)

The character roster is a big shakeup compared to past titles, even though functionally the gameplay hasn’t changed beyond the mission goals. Many of the crew from Gokujou Parodius return, including Michael / Gabriel, Hikaru / Akane, Sambo / Mambo and Koitsu / Soitsu. However, the crew that had starred in all of the previous games starting from Parodius Da! are now missing – TwinBee and WinBee are replaced with Ace from TwinBee Yahho! and the Shooting Star, along with his counterpart, the Black Viper. Pentarou is absent in lieu of Ivan and Toby, two Iwatobi penguins. Takosuke is totally missing, since he’s technically the main bad guy. He is replaced by Option / Multiple, the floating sidekicks who finally get their time to shine and can morph into various configurations, including the Blue Thunder from Thunder Cross.

Sexy Parodius is the rare video game that is almost pure joy – if one were to lick the CD of the console ports, one would expect it to taste like candy. Calling it one of the best Parodius games is obvious; calling it one of the crowns of Konami’s shooter library is completely justifiable.