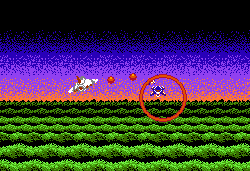 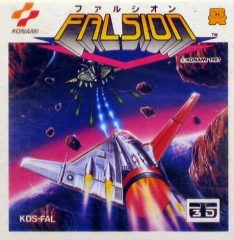 Falsion is a 3D shooter for the Famicom Disk System, similar to Sega’s Space Harrier. Falsion, however, differentiates itself from Space Harrier with different types of enemy patterns. In one stage, enemies will line themselves on both sides of the screen and shoot lasers at you. In some cases, enemies will visibly hover behind you before swooping out. One of the stages actually has buildings you need to avoid. There are six stages in total, each showing off some impressive graphics for the Famicom, especially for such an early release.

Of course, none of the 8-bit systems were strong enough to handle fully 3D action, and Falsion is no different. The action is extremely choppy and it’s remarkably tough to figure out what the hell is going on. Enemies don’t simply fly in waves, they tend to appear right in front of you or home in on your position. Sometimes it’s impossible to tell if an enemy is close enough to kill you, or whether it’s safe to fly in front of them. By the time you find out, it’s usually too late. Your only aids are missiles, which are found in limited quantities and can home automatically onto a single enemy. Otherwise, you’ll find yourself dying a whole lot, which also takes away any missiles in your arsenal. The levels are quite long, too, so replaying them after losing all your lives is pretty tedious. Falsion has some great music, bolstered by the wavetable channels of the FDS, and the silly Engrish messages after defeating the bosses are funny, but it’s too much of a mess to enjoy. 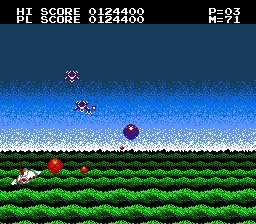 Falsion was Konami’s killer app for the Famicom 3D System, which was a set of glasses almost exactly like Sega’s 3D glasses for the Master System. Rather than using the typical red/blue patterns, they used powered shutters to simulate a 3D image. There were few games that supported it, but Falsion is probably the best looking, even though it’s still a pain to play.

The Falchion Beta ship from Gradius Gaiden is based off the Falsion ship from this game. 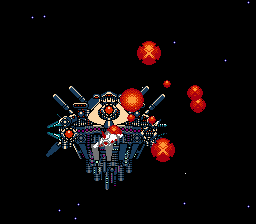 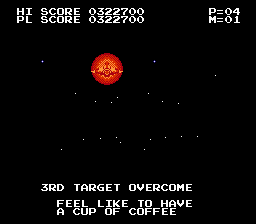