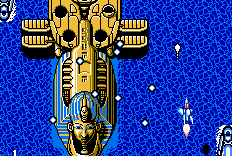 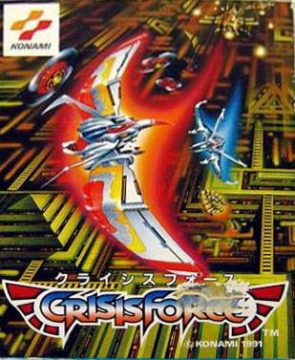 Crisis Force, a late-gen Famicom game, is easily up next to Recca as one of the most impressive shooters for the system. In fact, if it weren’t for the color limitations, you could easily mistake this as a PC Engine shooter like Super Star Soldier. In some ways, it’s even better. 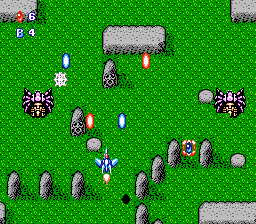 Although the setting seems a bit generic at first, the later levels begin to show a futuristic take on ancient Egypt, like it was inspired by the fifth stage from the NES/FC version of Life Force / Salamander. Some stages show off some particularly cool looking effects. Right in the first stage, the city beneath you begins to collapse and explode, with an earthquake creating a huge fissure from which enemies fly out of. The multiplane effect for these canyons look pretty cool – it was impressive when MUSHA did this on the 16-bit Genesis, and it’s even more impressive for an 8-bit system.

The game allows for two player simultaneous play, although since it does push the NES to the max, there’s plenty of slowdown and flicker. There are two main types of weapons – machine guns and lasers – which can be upgraded several levels. Furthermore, there are three ship configurations which can be switched on the fly, each with different weaponry and bomb types. There are also little orbs flying around – grab five of these and you’ll transform into some kind of super flashing bird with extreme firepower. You can only maintain this form for a limited amount of time, and taking damage will decrease the timer, but grabbing additional orbs will add a few seconds on to the timer. 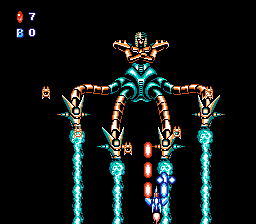 Like Space Manbow, if you compare it to Konami’s other shooters, Crisis Force isn’t quite as brilliantly designed, but it’s mostly impressive because it pushes the system to the max, plus it has some damn nice graphics and some decent music. It came out too late for Konami to publish outside of Japan, making it a necessary purchase for any import collector, but unfortunately it’s rather pricey.