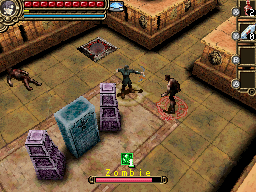 Perhaps to capitalize off the introduction of Dungeon Explorer on the Wii Virtual Console, in 2007, Hudson resurrected its series for portable gaming systems. In North America, both the DS and PSP versions are subtitled Warrior of the Ancient Arts, but they’re actually completely different games. In Japan, the subtitles for each version are different – the DS version’s is Jashin no Ryouiki, which means “Domain of the Wicked God”.

In the DS version, there are three races – Oros, Taratta and Emporos – each with three classes: hunter, for ranged attacks; warrior, for close range attacks; and magician, for concentration in spells, making for a total of nine characters. Each has a different weapon – the Oros warrior wields a bow and arrow, while the Emporos warrior uses pistols and shotguns. However, most of the characters wield melee weapons, as opposed to the projectiles from the previous game. Visually, though, they almost all look identical, outside of their coloring. The terrain consists of smudgy 3D graphics – typical for the DS – with ugly looking sprites. 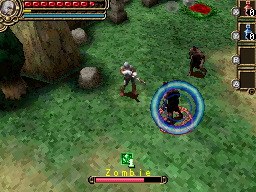 Outside of the name and the basic concept of dungeon crawling, very few elements of the original 16-bit games show up in either of the modern renditions. If you pick a ranged character, it does feel slightly like the older titles, but otherwise the only common element are the monster generators. After you create your character and wander around for a bit, you’re taken to a world map menu, where you can select your next area. Some areas contain multiple dungeons that must be conquered. Here, everything works under the same dungeon hack mentality – crawl through, slay everything in sight, gain experience and gold, and use items when necessary. The action is quick and the controls are quite friendly, even offering an auto lock-on for attacking. The upper screen shows a map of the area, along with any immediately usable items and spells in your inventory.

In addition to your primary weapons, you can also teach your characters “Arts”, two of which can be equipped at the same time. These special attacks are used automatically whenever your Arts meter reaches maximum. After firing, it slowly charges up again, but resets whenever you attack. The X and Y buttons are used for inventory items, which include a variety of healing potions, Genebombs (for quickly destroying generators) and items to escape dungeons. Monsters yield experience, and leveling up allows you to allocate experience in any of four areas. In addition to your Arts and standard magic spells, you can also bring an “Owon” with you, a kind of robot that acts as a pet and basically just follows you around, helping you attack. As you get more money, you can buy new equipment, and customize your Owon further. 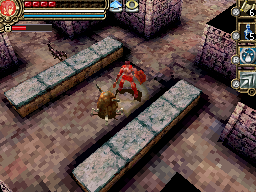 The DS Dungeon Explorer isn’t terribly long as far as RPGs go, but it’s certainly longer than any of the 16-bit games, with over sixteen different dungeons to explore. The major issue is that multiplayer is severely lacking. You can team up with one other person to tackle the pyramid, a single, multi-floored dungeon in the center of town, but the main quest – a huge bulk of the game – is for one player only. The music is also pretty annoying too, a shame after the excellent tunes of Dungeon Explorer II. In spite of itself, it’s still a reasonably fun game that controls well and remains compelling despite its simplicity, and the multiple character classes and arts lend well to replay. Even though it shares little with the original games, it still maintains much of its spirit, so it’s still fairly enjoyable.