Touché: The Adventures of the Fifth Musketeer - DOS, Windows (1995) 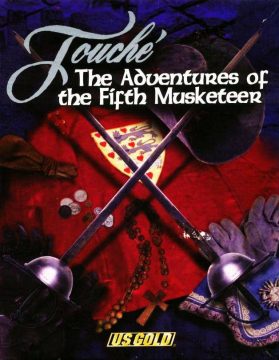 Oh, the glories of the public domain. For decades, movies and games alike have adapted works of classic literature into a variety in forms, all royalty free. Perhaps more interesting is when they work to create an original sequel (which isn’t as contradictory as it sounds), telling new stories in an established world. As such, there have been a number of adaptations of Alexandre Dumas’ trilogy about The Three Musketeers, the gallant, swordfighting warrior of the French. Also not quite uncommon are made-up stories of a mystical fifth musketeer. And that’s exactly the story behind Touché, a pleasant little adventure game that purports to tell the long lost story of Ensign Geoffroi le Brun.

The game begins in a dark alleyway, with the brutal murder of the Lord De Peuple. While it initially appears to be a standard nighttime mugging, the wishfully heroic Geoffroi learns that it’s actually connected with an evil cardinal with a diabolical plan to take over France. With the accompaniment of his hobo-turned-manservant Henri, the forgotten fifth musketeer will travel across the French cities of Rouen, Paris, Le Mans, St. Quentin, and a few others. He’ll also take time to romance the lovely lady Juliette, competing for her favor with that jerkwad D’Artagnan. 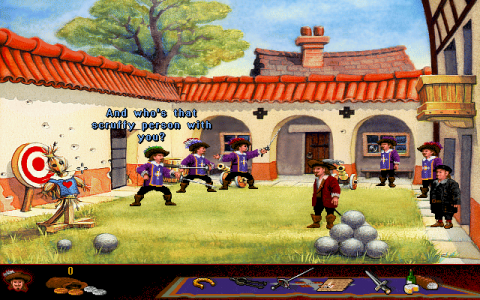 It’s pretty clear that the folks at Clipper Software had Monkey Island on the brain when they made this one, as the general visual style is very close, to the point where Geoffroi might as well as be a French, 17th century of Guybrush. On the upside, all of the graphics are SVGA and quite a bit crisper than the Lucasarts games at the time. On the downside, the animation is dull, and the backgrounds remarkably repetitive. There’s little visual distinction between any of the cities, and some areas, like the taverns, stores and stables, are very clearly recycled. The characters make note of how familiar everything looks, but that doesn’t necessarily excuse it.

The writing really isn’t up to the same level, either. Geoffroi is a fine chap, overtly enthusiastic and a bit naive, often plotting ill-conceived schemes and botching them even further. To contrast, Henri is fat, pathetic and mostly useless, only serving as an additional inventory bag and aiding in a puzzle or two. The developers put a lot of effort into their odd couple relationship, as they banter constantly when entering and exiting different areas. It’s a good way to establish their personalities, but the same dialogues repeat over and over when you revisit locations, and it gets old quickly. Yes, Henri, we know you’re hungry. Yes, we know you smell. And yes, for the twentieth time, we are, in fact, leaving Rouen for Paris. 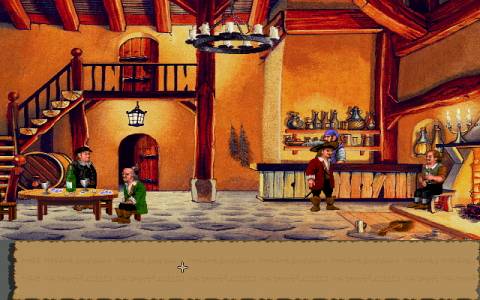 The secondary characters are rarely distinct, and, much like the backgrounds, are often just copies of each other. Beyond Geoffroi, Henri and Juliette, there’s the cranky squad captain, as well as Michaelangelo da Vinci, the dimwit nephew of Leonardo, who takes you down a river in a positively stupid (and halfway functional) boat, but otherwise everyone else is unremarkable.

The dialogue is only occasionally chuckle worthy, but it’s well sold by the surprisingly talented voice acting in the CD-ROM version. Geoffroi sounds a bit like Cary Elwes circa The Princess Bride, announcing his every heroic intention with a forceful amount of pomposity, while remarking to Henri with an appropriately exasperated tone. Henri sounds stupidly amusing enough that his character remains likeable without becoming too annoying, despite the repetitive chatter, and the rest of the cast, however bland, sells their roles well. It is rather funny that most of them avoid French accents in favor of British ones, a bit silly considering the Musketeers are actively fighting English invaders, and when you confront them, they really don’t sound any different. 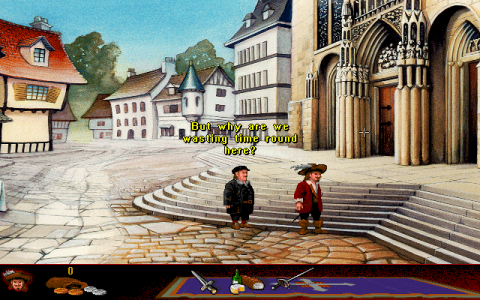 The interface is similar to the one eventually used in the third Monkey Island game, where holding the right button on a hot spot will bring up a bunch of contextually sensitive commands. It works well enough, although the hot spot indicator is more than a bit touchy, and makes some solutions more obtuse than they need to be. There’s not much in the way of structure, and you can accomplish many minor goals in any order. The puzzles aren’t particularly remarkable nor overwhelmingly stupid, despite some occasionally headscratchers. (How do we distract some soldiers in front a tavern? Why, just throw a melon in the water, obviously.) They’re in line with the experience as a whole – Touché is slightly funny, slightly charming little game, one that aspires to greatness but ultimately lacks the polish that would put it in the bigger leagues. When it was initially released back in 1995, it came and went without notice – perhaps because the publisher, US Gold, wasn’t exactly known for adventure games – so it’s pretty difficult to find. It is, however, quite compatible with SCUMMVM.