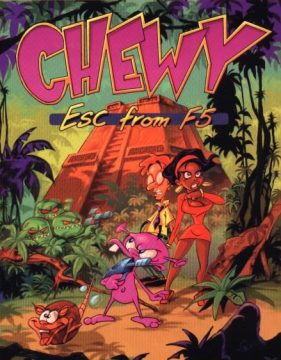 No, this game has absolutely nothing to do with Chewbacca from Star Wars, and yes, the title is a keyboard joke. The titular Chewy is a short bucktoothed pink alien pulling a heist on the gross green aliens known as the Borx. During their escape, his buddy Clint ends up spiraling out of control into a black hole, while Chewy himself is captured and imprisoned on their ship, the F5. After escaping, he follows Clint’s trail to Earth, finding himself in the dopey burg of Smalltown USA. Here, he teams up with Howard, a failed writer, to get his awful manuscript published. This then takes them to Big City, where they meet up with the gorgeous Nichelle, before taking off to the Amazonian Jungle to find Clint. 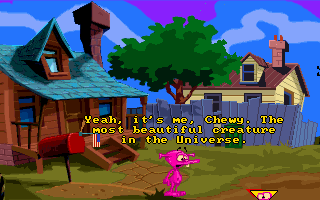 Like most European games not initially written in English, the dialogue never quite feels right, and Chewy, with his weird, squeaky voice and dopey wisecracks, embarrassing attempts at street slang and dated pop culture references, often comes off as more obnoxious than cute. Still, it’s hard to hate a game that looks and sounds as fantastic as this one. The VGA visuals have held up extraordinarily well, with a colorful, unique style and fantastic animation. The digitally streamed music is also excellent, a mixture of ‘70s funk and ‘80s pop. The puzzles are silly and slapsticky – one involves flattening an alien with an anvil so you can use its paper-thin corpse on a body scanner; another involves kidnapping a highly flatulent rodent to shock some foes into a coma. It’s mostly juvenile but it’s surprisingly fun, since it has a sense of energy missing from most LucasArts comic adventure clones and the well-telegraphed puzzle solutions are clever without being obtuse. Blue Byte, the German developer, was mostly known for their The Settlers series, and this was their only adventure game – a real shame, that.