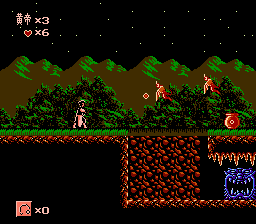 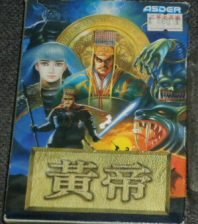 The world of East Asian video games is a fascinating and mysterious one. When you examine mainland China, Taiwan and Hong Kong, there are countless unlicensed and undocumented video games being produced, some of very high quality. It’s an ever changing bouillabaisse of technology and culture. A lot of what’s produced is for Nintendo’s antiquated Famicom hardware, which is easily cloned and cheaply manufactured. There’s an incalculable quantity of your basic game knock-offs, in addition to unusual ports such as Resident Evil from the PS1, remakes such as Final Fantasy VII, and then a selection of entirely original games, such as the surprisingly excellent Huang Di. 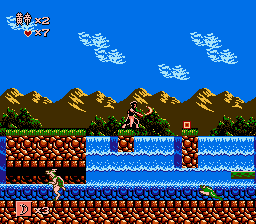 Unfortunately, being an unlicensed Taiwanese game, produced only in small batches, we know very little about it. Thanks to the splash screen we know it was developed by electronics company ASDER, but we have no idea when, where, or how it was released or dumped. For a long time around the millennial days of the internet, when emulation wasn’t what it is today, there wasn’t even consensus on the name. Somehow a ROM had surfaced and forumites referred to it as “Wang Di”, “Hwang Di”, or simply: that weird Chinese platformer. No one had ever seen it in the wild either.

The name, which means “Yellow Emperor: Battle of Zhuolu” in English, refers to an ancient battle in Chinese history. To quote the Wikipedia page:

The Battle of Zhuolu was the second battle in Chinese history as recorded in the Records of the Grand Historian, fought between the Yellow Emperor (Huang Di) and Chi You. The battle was fought in Zhuolu, near the present-day border of Hebei and Liaoning. According to the Chinese mythological account Shan Hai Jing, Chi You, with the Giants, Guryeos and evil spirits, rebelled against Huang Di at Zhuolu plains. Both sides used magical powers, but Chi-You had the advantage of forged swords and halberds. Using his powers, Chi You covered the battlefield in thick fog. Only with the help of a magical compass chariot could Huang Di’s troops find their way through the mist. He also used his daughter Nubá, the Drought Demon, to harm Chi You’s troops. Later on, Chi You suffered more defeats and was captured. Only Yinglong, the winged dragon, being a brave servant of the Yellow Emperor Huang Di, dared to slay him. Chi You’s chains were transformed into oak trees, while Yinglong was cursed to remain on earth forever.

What that has to do with Huang Di the video game is anyone’s guess, since it starts with cut-scenes showing an old man on horseback witnessing a series of winged demons above a burning village, followed by someone sky-surfing atop an enormous sword through the clouds towards a celestial palace. What follows is a competent and enjoyable platformer, similar in style to Ninja Gaiden, and with a map screen reminiscent of Ghosts ‘n Goblins.

When the game was first dumped several revisions floated around the internet, with “rev” and a multiple digit numeral tacked on the end. Today places only host one version, with the standardised (unl) on the end, to signify its unlicensed status. This is significant because, although the revisions didn’t seem to have any differences during play, it showed that either ASDER produced its own revisions, or the ROM dumps varied. Which is important because when playing the ROM via NES emulator there is a glaring anomaly: your character is cursed with permanent flight. Not in the sense that it was intentional, but rather that the physics are screwed up, and at the height of a jump instead of coming down you travel upwards continuously, as long as the jump button is pressed. Even if you release the jump button, sending your character back to earth, pushing it sends him levitating again. If not a bizarre glitch, it seems like something leftover from debugging. Unless you have tremendous discipline not to abuse this, it removes any challenge from what is already a fairly easy and short platformer. Not that this should prevent anyone from trying it, because it’s damned interesting regardless. It’s unknown if this glitch exists when playing the cartridge on actual hardware. 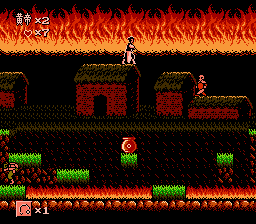 What makes Huang Di so fantastic is how explosively creative it is. For starters the music is exceptionally good, from the moment the opening cut-scene begins, right throughout the game, making tremendous use of the Famicom’s limited sound abilities (in fact it appears to use all sound-channels for music, because sometimes when attacking part of the music seems to cut out to play the sound effect). The visuals too are impressive for the Famicom, especially considering this was an unlicensed title. You lose the effect with still screens, but every stage background is animated; the leaves of a bamboo forest sway continuously in the wind, while in a fungi jungle the mushrooms pulsate as if alive and wary of your presence. There’s also a fantastic use of colour, which other developers could learn from. The Famicom was terrible with regards to how many colours it could display, compared to its 8-bit rival the Master System, but Huang Di works within the constraints and uses deeply contrasting palettes to create some stunning vistas in several stages.

Although functioning like a standard platformer with secondary weapons (again, think Ninja Gaiden), the content of the stages is also impressive. The first few levels are fairly uninteresting, with strange deer/turtle mutants and some standard bosses, but the third level kicks off with a flaming village and headless warriors who fling their heads at you to attack. It’s quite a cool section and is followed by an underground cavern with branching pathways and optional spider bosses. The next level is the bamboo forest with is awesome, filled with flying wasps, swordsmen, and a seven-tailed blue fox as the mid-boss, and then later a swordfight with a mystical tiger in the moonlight (contender for coolest looking boss fight on the system?). Afterwards is the fungi jungle, which defies explanation. Interestingly, there’s a section here where a power-up is held on a platform far out of reach, and the only way to get is by dropping through a breakable walkway and flying over. The fact this exists hints that maybe the indefinite flying was intentional… The final level is a maze crawl and is actually a bit frustrating, since if you use the wrong door you can end up back at the level’s start. After the boss the ending loops and we’re shown what’s possibly a credits screen, written in Chinese. 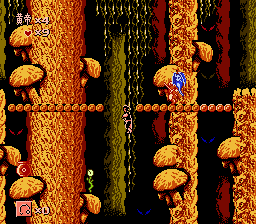 Being unlicensed it’s not quite as polished as you’d want. Along with the aforementioned infinite jumping, the physics in general tend to be wonky. Enemies requiring two hits to be killed can be knocked off platforms and sent flying, except they’ll bounce around until they hit flat ground, and will occasionally get trapped on parts of the scenery. It’s not really a game breaker though, and is amusing to watch. What is annoying is when abusing the infinite flight system and you get hit by an enemy, whereupon the character gets locked into a falling animation and can’t recover, leading to a sudden death. The checkpoint system also needs work, since dying actually sends you back several levels to an earlier point on the map. It works similarly to the 1-4 sub-levels in Super Mario Bros., except in Mario if you died fighting Bowser in level 2-4 it didn’t then send you back to 2-1 to go through the subsequent four levels again. 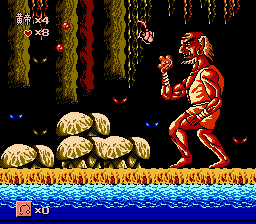 Compared to the best platformers on the hardware Huang Di has several flaws and might disappoint, but its sheer strangeness makes it worth playing. You’ll easily finish it within an hour, even without save states, but take a moment to see what it’s attempting in the stages, listen to the music, laugh at some of the bizarre glitches, and enjoy what is arguably one of the finest and quirkiest unlicensed games on the system.