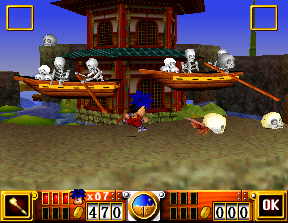 The subtitle of Goemon’s second N64 game translates to “The Dizzying Journey: A Large Helping of Demons”. It still uses polygons, but returns the action back to 2D. Konami had finally mastered the N64 by this point, and the graphics look gorgeous, mostly free of the blurry textures or fog the system had become known for. It also runs far smoother than its predecessor. While the gameplay is 2D, the landscapes are rendered three dimensional, much like the Klonoa games, which lends a fantastic amount of depth to the backgrounds. 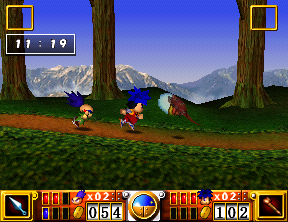 The map screen is back, although taking inspiration from the FC Goemon titles, you must collect a certain number of passes before you can enter the final stage of each area. You get a pass for beating a level, but you also find them by completing a variety of mini-quests. Most of these involve replaying levels with a specific task (find a certain number of items, kill a certain number of bad guys, win a race, etc.), although some passes are scattered throughout the stages, as well. Luckily, there are always extra passes to be found, so you don’t need to complete all of the challenges to move on. Sometimes triggering these subquests can be annoying, since you have to run through towns and talk to everyone to find out what to do, but you’re given a dash maneuver that lets you tear through villages at lightspeed. Each level also has a different day/night variation, plus there are hidden costumes. One has Yae dress up as a high schooler from the Tokimeki Memorial series.

You can’t switch between characters at any time – you’re only allowed to swap at designated spots, where you’re transported to the “Tea House In Another Dimension”, a silly place filled with sci-fi noises. A second player can join at any time, and both players can piggyback each other, like in Goemon 2. Since Goemon has a double-jump, you’ll probably be playing as him most of the time, as he makes the platfotming much easier. 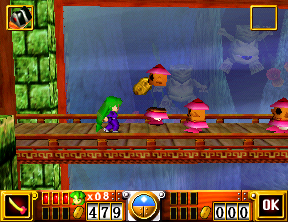 The major bad guys are also throwbacks to old Goemon games. The Wise Old Man has invented a machine to resurrect the dead (primarily to cavort with Marilyn Monroe), when it’s stolen by the evil floating nun Bisumaru. (S)he wants to summon an army of zombies to please her master, Dochuki, the leader of the underworld. One of the returning bad guys is Kabuki 64, an upgraded version of an enemy from Goemon 2 for Super Famicom. You’ll also meet a cat girl named Suzaku, but the coolest new character is Miss Impact, a gigantic robot vaguely patterned after Omi-chan. Her role makes the Impact battles a bit more interesting, as you can now switch viewpoints between the two robots.

While the game isn’t necessarily more difficult than the others in the series, you can only take three hits before you die, unless you’re wearing special protection. Plus there’s a distinct lack of minigames. But it doesn’t deter from the gameplay – the amazing graphics and levels help make this one of the best of the series, trailing only behind Goemon 4 SFC. For anyone who’s getting tired of the heroes wearing the same outfits over and over again, there’s three alternate costumes for each character to unlock. And it’s in English too. The only problem? They kept the voices in the prologue (and they’re still in Japanese), but axed the opening song (and the whole intro music clip along with it).