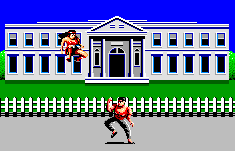 So first things first: The eponymous protagonist of Sega’s Flashgal is Wonder Woman. No, seriously, she may be called “Flashgal” for the sake of copyright, but look at her! As a superheroine clearly inspired by DC’s star-spangled Amazon, Flashgal is devoted to punching out crime. The criminal empire in question seems to be headed by a stocky and short bald man in a white suit and shaded glasses, a rather unlikely main villain but he’s the one you gotta beat up. The objective in each level is simply to make it to the end of the stage while punching and kicking anyone who attempts to get in your way. One thing that sets Flashgal apart from other 2D beat-em-ups is that you are almost always moving and automatically scrolling, unlike most other such games where you advance the pace yourself. Even while crouching, Flashgal defies physics and scoots along the ground without moving, which is a pretty funny case of sprite laziness. The main baddies you beat up are gray-suited thugs who look vaguely organized crime-ish, but you can also expect other baddies like hard-to-hit dogs and obnoxious kung-fu fighters who take more than one hit. 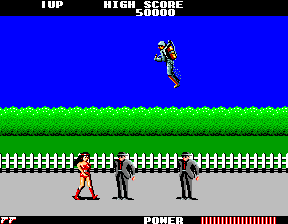 To break up the potential monotony of beating up mafia goons, you have some levels that take place on vehicles: Two have her riding on a motorcycle, one is the requisite shooting level where you pilot a helicopter, and there’s even one which takes place on the sea in a jetski. On the motorcycle and jetski, you can only fire missiles upward and need to jump over obstacles in front of you, but the helicopter stage plays out like a standard shoot-em-up where your missiles fire forward. While these segments are an interesting diversion on paper, they usually tend to be the most frustrating parts of the game (particularly that danged jetski one) as you can only take one hit before your vehicle explodes and everything with it. 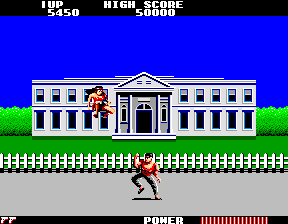 Things also get quite vicious in general about halfway through: There are eleven levels in total before the environments start to recycle themselves, and the difficulty incline is made rather clear at about stage six. Even outside of the vehicle levels, enemies become more numerous and varied, with one of your worst foes being bouncing and rolling tires that can only be dodged, never destroyed. There are also these mechanical birds which are incredibly hard to hit, often attacking you in groups of four or more. You regain a bit of power if you strike down enemies, but they can really swarm you and your punches may not be enough to contend with everything at once. 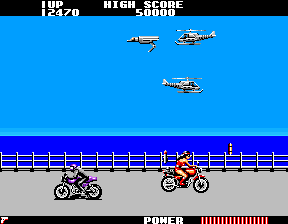 Still, there are a few advantages in your favor. The third level gives you a sword which boosts your attack range considerably, but for some unknown reason, the level scrolls at half-speed. Perhaps your sword is a lot weightier than it looks? And why do you not get it in any other level? Whatever the case, it helps to fight the samurais you fight on that level which can shred off almost all your life bar in a single sword stroke. Now while the sword doesn’t pop up after the third level, you get something even better in the remaining non-vehicle levels, but you have to punch out a large green bird before you see the power-up in question. The bird doesn’t always appear, but if you get lucky, whomp it to grab a gun with infinite ammunition! The gun makes almost every enemy a non-threat, but you still have to deal with tires and bombs which are invincible. If you have the gun, it makes the recurring boss really easy, but he’s a bit more of a challenge otherwise. 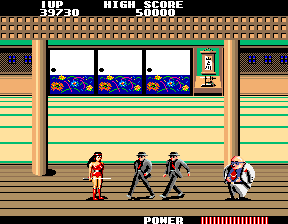 At the end of all on-foot levels except for the first, you come face-to-face with that short and bald jerk from the game’s intro. When he shows up, you hear an ominous boss tune that is actually the exact same theme as the boss music from Repulse, another Sega game that ran on the Kyugo board. Which came first and whether or not this was intentional or plain laziness is unknown, but it tells you that the Kingpin’s short nerdy cousin is on the scene whatever the case. Often flanked by a pair of goons, when you first face him, he launches an odd projectile at you which temporarily petrifies you and leaves yourself susceptible to his thugs. In later levels, he decides to just mow you down with a machinegun. 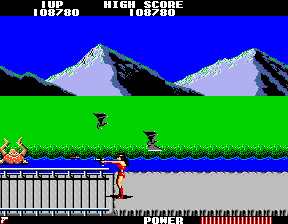 So Flashgal is a pretty danged tough game, but it’s quite fun for what it is. It may not be Sega’s most memorable game of all time, but it has an interesting style and is quite fun to play. One may wonder if it was supposed to be an actually licensed Wonder Woman game at any point before the license fell through, or it could have been created as a loving homage without any intended license in the first place. It never got to any console ports or future compilations and was one of Sega’s arcade one-shots that just sort of fell into obscurity.