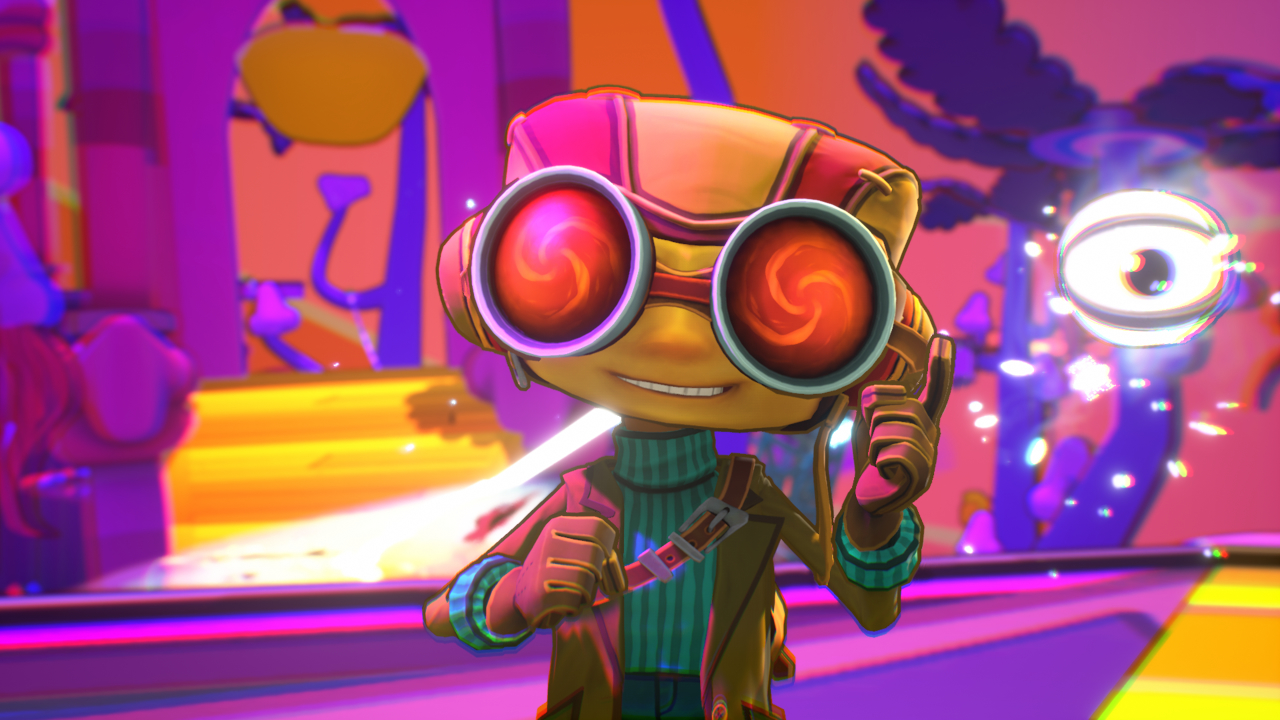 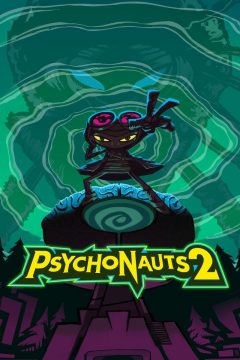 The original Psychonauts became a cult classic in quick order, and a sequel had been craved for years. Eventually, Schafer decided to try crowdfunding again after Broken Age to get a sequel made, though this time with the aim of drumming up interest from a possible publisher to fully fund development, even making a quick VR game called The Rhombus of Ruin meant to tie the first game and sequel together. It wasn’t anything special, mainly just gave supporting villain Dr. Loboto a backstory, and a sort of side attempt to secure needed funding with a lower effort project. Finally, Double Fine was sold to Microsoft, and while that decision is extremely questionable if you know about Schafer’s poor luck with large publishers, it did at least bring Psychonauts 2 over the finish line. 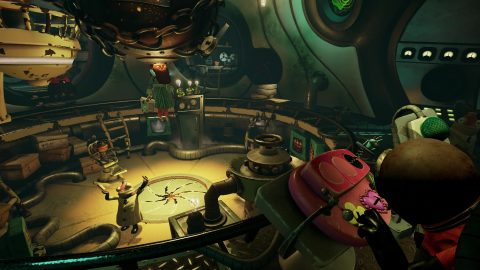 Psychonauts in The Rhombus of Ruin

Something changed in the process. The original Psychonauts was a messy game that was loved for its personality and the adventure game touches, like the puzzle heavy levels. Psychonauts 2 is a proper action focused platformer, with tweaked physics and balance, and surprisingly robust combat. The game starts shortly after The Rhombus of Ruin, where the team managed to save Lili’s father, chairman Truman Zanotto, from the clutches of Dr. Loboto and Raz gave Loboto back his moral compass (that detail not mentioned here, strangely). An attempt to trick Loboto into explaining who his boss is fails, as Loboto is extremely intimidated, particularly by the threat of the return of Maligula, the Deluge of Grulovia. She was a water controlling psychic who broke apart the original six founders of the psychonauts and died shortly after, though her followers are obsessed with bringing her back, and Raz may end up in the middle of this fight. 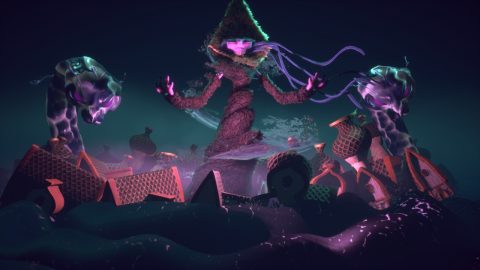 Though he is also dealing with having to join the psychonauts intern program (turns out Ford Cruller can’t officially give someone agent rank) where he struggles to earn the respect of his peers, and further complications with chairman Zanotto entrusting him with putting back together Agent Cruller’s mind to help find a mole in the psychonauts who may be trying to bring back Maligula. What soon follows is a series of revelations Raz may not be ready to discover, especially when they start to cross over with his family’s history, forced to see his childhood heroes in a much more dim light.

Despite only being set a few days since the first game, Psychonauts 2 is a refreshing experience in the modern day. With a heavy trend towards cynicism, the optimistic vibe here is a great change of pace, even with the even darker subject matter. While the first game had some dark edges, Psychonauts 2 deals much more directly with themes of trauma, mental health, addiction, and even straight up mentions of killing and death, and it manages to handle them all with a delicate hand and a good deal of empathy. The tutorial levels outside the first are gone, leaving the majority of the game based around the first game’s second half with the asylum patients, Raz having to help people with their mental hangups and pain. The first level even cleverly handles explaining the concept of consent for younger players. It’s sort of like old school PG family films in terms of tone, where they weren’t afraid to get grim, managing a great balance of fun and thoughtfulness. 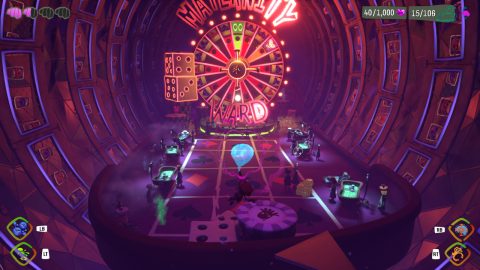 This allows for some inventive level design. For example, one part of the game has you putting a brain that has been stuck in a jar for decades in a brainless body, and going in to find said brain is having massive sensory overload, resulting in trippy 70s psychedelic colors through the mind world. It also summons a panic attack, one of many new enemy types. Instead of enemies based around level theme with minimal mechanical differences, enemies are now a pool of various mental concepts, like bad ideas, regrets, and enablers. They all function like their names would imply, enablers being the most clever as they enable other bad habits to make them stronger and faster, and have to be taken out first to weaken their bad buddies. Panic attacks, in particular, are extremely fast and aggressive, twitchy and colorful creatures with disfigured skull faces.

Thankfully, you have the skills to take them on. Raz can now equip four powers at once and easily switch through them with a menu that pops up and closes with no delay. From the first game are psi blasts for shooting at a distance, levitation for platforming (now nerfed a bit so as not to break the platforming challenges), psychokinesis changed to a chargeable AOE, telekinesis that now has some auto-targeting to make it easier to use, and clairvoyance. That last one is mostly for finding extra psitanium (the new currency), but is used for a late game enemy type called bad moods to find the source of said bad mood and defeat them. You also get mental connection to pull in enemies or pull yourself to bigger enemies, plus grapple around stray thoughts to find new areas, a time slow for the expected uses, and projection. It’s the coolest power in concept, summoning a little paper Raz for helping with puzzles, but he has little combat uses beyond distracting an enemy or two. At least he’s voiced by Rikki Simons, giving us a little Invader Zim reunion. 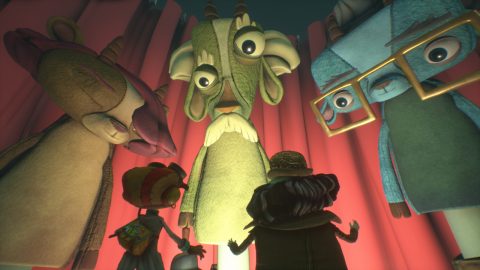 Raz having four power slots tied to buttons is important, as it means he can use his powers all at the same time. Combat is now based around a dedicated dodge button, allowing you to avoid attacks, and using your powers as you move. Blast enemies when dragging them in with mental connection, set enemies on fire to deal with any gooey doubts while throwing back a hammer at a judge with your telekinesis, go blow for blow while setting an enemy in a time slow bubble for extra damage, etc. It’s fun stuff, bordering on character action levels of complexity only off set by how chaotic the fights can get and the lack of time to read certain animations. The lock on can be tricky to latch to the right enemy, but it’s a minor issue.

Puzzles have been cut down for the sake of platforming challenges (even so far as to remove the inventory wheel), made workable by your wide swatch of powers fitting into the collectathon nature of the game, along with extra secrets and paths you can find with them. Figments remain obnoxious (the last banana in Bob’s Bottles is on a palm tree to the left of the pink bottle in the island area, you’re welcome) but are easier to spot with higher resolution textures and slight animation. Otherwise, everything is a delight to track down, including in the multiple areas around Psychonauts HQ, and it all feeds into your rank. 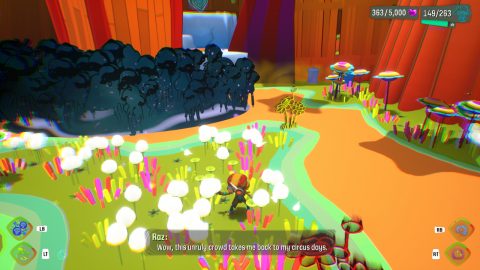 Speaking of which, ranks unlock points you can put into your powers instead of a single power bonus line like before. A nice touch that helps you customize your build to what you find most useful or fun (though that launch jump in levitation is a absolute must). If you go for full completion, you’ll end up getting everything, but that can’t happen until the post game. Also worth mentioning that half a brains are the new way to increase Raz’s health, a new brain on the bar for every two you find in each mind world.

It feels like a huge change of pace for the platforming in a Psychonauts game to feel genuinely good to perform. Where the previous game had issues with having to adjust yourself so much with swinging and pole climbing, not to mention bar to bar swings placed in a way where being in the wrong place on a bar would drop you in a pit, this one never has any real moments of frustration. It feels good to move, and you can even unlock a useful mid-air dive to finish hard jumps by completing one of the handful of side quests. Even the boss battles are massively improved, fairly simple but satisfying to finish and huge spectacles in their own right. No more janky behemoths and gimmicky puzzle fights, now they’re either proper platformer rule of three affairs with complications each phase, or full on skirmishes with attacks coming at you from every angle. The final boss isn’t terribly difficult, but it’s a great test of all your skills, powers, and know how with using them. 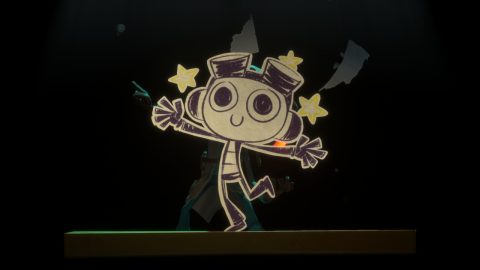 You can even buy pins now, which grant extra bonuses, able to equip three at a time. This is where you can get pick up magnetism, along with stuff like extra psi blast ricochet with the right upgrade, larger time slow bubbles, and most importantly, the Bobby Zilch dance on idle and the ability to pet animals with your telekinesis. Also, be sure to visit Otto Mentalis, the gadgeteer of the psychonauts, to get both photo mode and a thought tuner that reveals more stray thoughts in the overworlds. If you’re going for a completionist run, it can take up to thirty hours easily, and it’s a great time, and you will need that thought tuner.

Enough good things can’t be said about Schafer’s script either. Maligula might go down as one of his best villains in his entire catalog, and the new characters are all diverse and fun to hang around, even managing to shave down the first game’s tendency towards ableist humor. Raz’s fellow interns are all fun to be around, if underused, distinct and able to actually take Raz out of his comfort zone (unlike that clown Bobby Zilch). His full family are a bunch of goofballs with realistic interactions with the little nerd, and the characters you deal with in the last stretch are all wonderfully sympathetic and complex in their own right. There’s even a canonical gay couple here, one of them voiced by Jack Black, and their depiction is beautiful in how human it is. 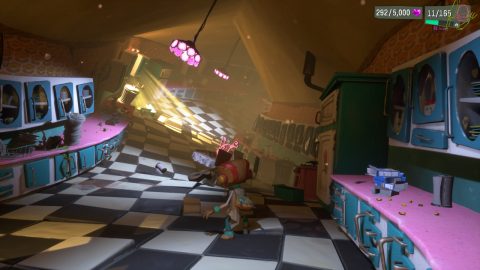 The game’s art style also transitions to HD with out a hitch. Everything looks familiar but off, as expected, while managing to keep every person looking expressive but not off putting, no matter how weird they get. Even Loboto manages to show some surprising facial range, which you wouldn’t expect from that character design. It’s also extremely necessary for the game’s last act dark turns, as it helps keep the tone balanced. Without going into detail, Maligula isn’t called the Deluge of Grulovia for nothing. Peter McConnell also returns to do the score and it’s every bit as goofy and deranged as before. 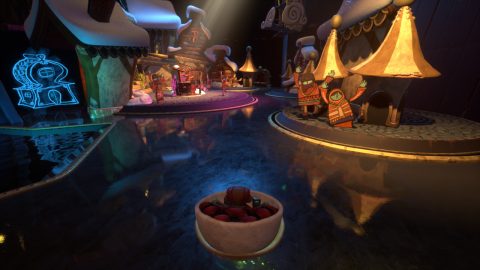 Psychonauts 2 isn’t just a fantastic sequel, it’s Double Fine’s shining jewel, a testament to their creative spirit and showing how much they’ve learned as developers in the sheer level of polish on display, down to the large bits of dialog and flavor text to uncover. It’s worth considering as one of the classics of the 3D platformer canon, a game that manages to not only be charming, hilarious, and even thought provoking, but a good time in its own right on just a base play level. The wait was more than worth it, and if we’re lucky, maybe we’ll get a third, but ending here would be satisfying.