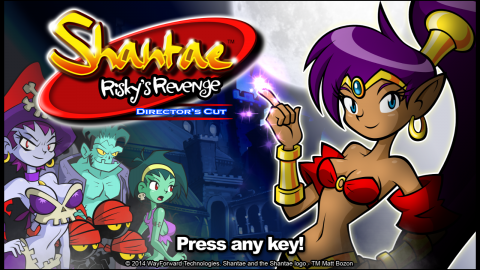 Due to the original Shantae‘s extremely low sales, WayForward focused almost completely on licensed games during the GBA and DS era, with the only original IP they worked on at the time being the mildly interesting RPG/shooter hybrid Sigma Star Saga. However, with the advent of Nintendo’s DSiWare service (and downloadable games in general), WayForward and other small devs sadly stuck on the portable scene were given the chance to truly shine, and so after the unexpected success of the first two games in the Mighty! puzzle series – Mighty Flip Champs! and Mighty Milky Way! – Matt Bozon and his team were finally able to release what their fans were dreaming about for almost a decade – a brand new Shantae game. 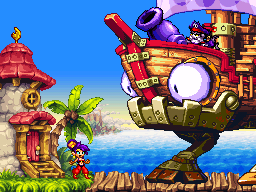 An undisclosed amount of time after the original game’s ending, and everyone’s favorite archaeologist/mad scientist sets up a mysterious Genie Lamp as an exhibit in his yearly Relic Hunter Expo. On its grand opening the oh-so-precious lamp gets promptly stolen by none other than the Nefarious Lady-Pirate, Risky Boots. Now it’s up to Shantae to collect Sequin Land’s three Magic Seals and the lamp before Risky can use them all in some sort of crazy ritual, but it seems that her dear old uncle is hiding something from her… 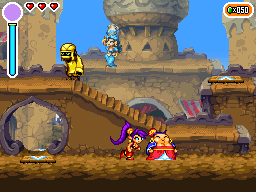 While the original Shantae shares many of its gameplay and design elements with the action-RPGs of yore that inspired it, Risky’s Revenge deviates greatly from the mold set by its predecessor in many ways. The biggest change here is probably the inclusion of a simple map, which one can buy for cheap at Scuttle Town’s shop, and the drastically-altered overworld structure, which now is much more akin to a standard Metroidvania.

It is, however, a little confusing. The map isn’t very precise, and only shows your vague location on the overworld. In dungeons, the map is useless. Many areas are divided into several parallel planes, which you can leap between. Some of these planes have exits on their sides, but some don’t – there’s nothing to indicate whether they lead somewhere else until you try to leave, and some are just invisible walls. It’s not a very large overworld either, and areas are blocked off until you find the necessary animal transformations. 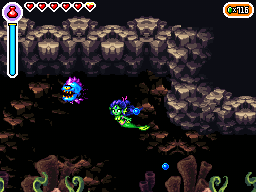 Also changed is the power-up system, which now greatly resembles the magic system found in most The Legend Of Zelda games. The Pike Ball, Fire Ball and Storm Puff all return, with single-use Magic Vials and the occasional drop now being used to fuel them, and Fighter Equipment sort-of-returns with the Silky Creme, which lets you attack faster. Even though gems are now much more abundant, many of these items still have a steep price thanks to the incredible-and-edible Magic Jams, which are spread all over Sequin Land and work as currency for valuable upgrades. The dancing mechanics, however, have been simplified, with no Dance Meter to be seen – you just hold down the “dance” button for a specific amount of time, without the need to hit any directions. The day/night cycle is also gone.

Also cut down is the game’s length. While the original Shantae is a rather short game, with only two linear stages, four small dungeons and a rather large overworld, Risky’s Revenge is even shorter, with only three much smaller dungeons (one of which is just a timed enemy rush), a shoot-em-up-esque final stage and a rather compact overworld. And while there are now Magic Jams to collect and the number of Heart Holders to be found is exactly the same, Fireflies are nowhere to be seen and Baby Warp Squids only play a role in the game’s final stretch. There are also only three animal transformations – monkey, elephant and mermaid. The DSi’s memory limitations probably play a part in this, but it’s also possible that Risky’s Revenge wasn’t developed as a full-on sequel, but rather as an appetizer for bigger, better Shantae adventures, and the game’s plot certainly factors into this. 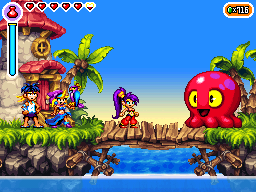 The graphics, however, are gorgeous, with vivid, lushly-animated sprites and backgrounds similar in style to the ones from the cancelled GBA and DS installments in the series. Everything from Shantae’s hair to Uncle Mimic’s beard is amazingly fluid, with the sprites’ smaller size only contributing to their beauty. The soundtrack, which is once again composed by Jake Kaufman, is comprised almost entirely of (great) arrangements of the original game’s tunes, though.

One thing that hasn’t changed in Risky’s Revenge is the wittiness that all inhabitants of Sequin Land seem to share, and thanks to the improved and more frequent dialogue this is played up to eleven. References to other games are frequent, Warp Squids still have a severe species-wide responsibility problem, little girls are prone to long rants about the life-long implications of never seeing their pet again, zombies browse the internet and even the original Shantae is riffed at at one point. Still, some of the funnier moments come not from the dialogue, but rather from the ways you can interact with the game’s environment and from the item descriptions. The game also introduces the three Barons of Sequin Land – Ammo Baron, a cyclops who helms a military battalion; Squid Baron, a loveably goofy octopus, and Hypno Baron, a creepy wizard with a skeleton face. You’ll face off against them in boss fights, but some of them also show up again in later Shantae games. 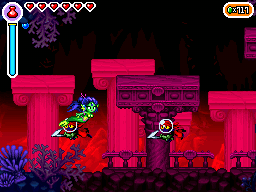 While originally released for Nintendo’s mildly successful DSiWare download service in early 2010, Risky’s Revenge eventually got ports to iOS devices and Steam in 2011 and 2012, respectively. Both of these versions use high-res portraits for the characters and text. The iOS version also has a different HUD, and blurs the gameplay screen. While the iOS port doesn’t offer anything new besides a few achievements (including one for doing what may be the funniest/cruelest thing to do in the history of gaming), the Steam/PlayStation 4/Wii U port retains such function while adding the brand-new Magic Mode, a brand-new “second quest” which halves magic consumption while also lowering defense and that gives Shantae a visible new costume to boot (this same outfit, or rather a very similar one, is also worn by the half-genie and her girl-friends in a particularly sexy/hilarious segment in The Pirate’s Curse), while still maintaining the exact same pixel-art visuals that made the DSi version so popular among gamers. It also changes how the Warp Squids function – in the original version, they were found in pairs, and you could only warp between those, while in the Director’s Cut, you can warp from any Squid to any Squid. 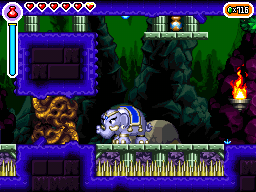 As short and scaled back as it is, Shantae: Risky’s Revenge is still a great game and one of the finest side-scrolling action games of the 2000s, but it falls flat in comparison to its extremely unique predecessor and its grandiose sequel, but it’s worth playing for the tight plot connections it shares with Pirate’s Curse alone.