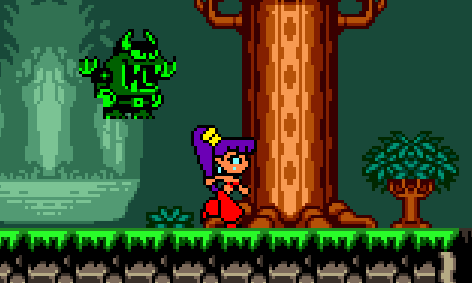 Wayforward Technologies was founded in 1990, and worked on a number of licensed and education products over the course of the decade. But seeking to create their own intellectual property, they developed Shantae, released for the Game Boy Color. It starred a cute purple hair genie, a character developed by Erin Bozon, the wife of Wayforward game designer Matt Bozon. Taking place in an Arabian-inspired setting, featuring 2D gameplay in an open ended world. While the first game was initially unsuccessful at retail, Wayforward continued to develop and pitch the series to publishers for many years, until they were able to self-publish a new game for the Nintendo DSi downloadable platform. Given a wider audience, the series has since built up a substantial following.

Shantae, the Game Boy Color’s swan song and the first original game developed by the now-famous neo-retro developer WayForward Technologies, can be considered the unsung beginning of the ongoing nostalgia-mania that’s affecting most indie game developers, harkening back to a genre known by many and despised by most but extremely influential to the game industry as a whole: the 80’s side-scrolling action-RPG, a style that brought us games such as Zelda II, Simon’s Quest, and the Monster World series).

The game shares many elements with these classics, such as a big, peculiarly-structured overworld (it’s a horizontally-oriented endless loop, with no dead ends whatsoever once you’re fully powered-up), several towns to visit and lots of backtracking, both optional and mandatory. However, while the aforementioned titles suffer from poor translations and little-to-no story, Shantae has some basic yet creative and entertaining lore to back up your quest, all told in-game by NPCs (it also helps that the game was developed in North America, meaning that it didn’t need to pass through translation woes).

Sequin Land is a small island located smack dab in the middle of the ocean that has a long history with the ancient, all-female tribe of the Genies: beautiful, immortal women who wielded powerful magic. For many years they remained a complete mystery to the island’s human populace, but once both sides approached each other, their worlds and traditions merged, and eventually Genies began to bond with human men, resulting in the birth of the Half-Genies: spunky, energetic girls who combine their fathers’ mortality with their mothers’ attractiveness and magical powers, except that, for some odd reason, their abilities are always incredibly weird. Pure Genies eventually became extinct/disappeared for reasons unknown, while their daughters grew to live alone or with the human side of their families. To back up this quirky plot, Shantae is packed with an equally-quirky, largely-female cast of characters that truly brings out the game’s charm and make it a great experience to play.

The plot is kicked off when the evil pirate Risky Boots and her crew of Tinkerbats, tired of not receiving their imposed “taxes” over the people’s traversal of the sea, stage an all-out attack on Scuttle Town, stealing Uncle Mimic’s most recent discovery, the Steam Engine, along the way. The poor old man doesn’t have a clue on how to use it, but Risky does: in combination with four of Sequin Land’s most powerful artifacts – the Simmer Stone, Dribble Stone, Golem Stone and Twinkle Stone -, the ancient piece of machinery can be converted into an endless power source for her fleet of pirate ships, finally enabling her to take over the sea and the land. To prevent this disaster from happening, Shantae has to travel all over the island, seeking assistance from her friends so that she can get all four Elemental Stones before the pirate mistress does.

After a linear introductory stage, the game opens up to reveal a seemingly endless, looping overworld, with side-scrolling fields and dungeons and third-person, behind-the back towns. Although there are only five settlements sprinkled through several long screens worth of grasslands, deserts, swamps, drenched cliffsides and icy mountains (one of them being the Zombie Caravan, which randomly replaces one of the swamp screens every night), each one of them has a few unique NPCs and at least one special building. Scuttle Town’s nocturnal Dance Parlor is basically a mini-DDR, Oasis Town’s Gecko Match is an interesting yet pretty basic new spin on the classic game of dice, Water Town offers both special Fighter Equipment (which add extra moves to Shantae’s arsenal) on its shop and the Firefly Shrine, which challenges the player to a game-long sidequest of collecting twelve fireflies, Rottytops at the Zombie Caravan challenges you to a mandatory, extremely infuriating footrace and the Thieves’ Hideout offers you an optional new transformation if you run the game on a GBA or the GameCube GBA Player, making Shantae one of the few late GBC games that has extra features available only on Nintendo’s then-next-gen portable (the color palette is also expanded and generally brighter in GBA mode, to compensate for the original model’s infamously dark screen).

One can’t talk about Shantae – or any WayForward game, for that matter – without pointing out how amazing it looks. Shantae, being WayFoward’s first original game and Matt Bozon’s precious baby, is one the best-looking title to appear on Nintendo’s late-90s portable, with exceptional animation, pretty backgrounds (some of which pull off some nice parallax effects) and great attention to detail. Every character, enemy and town has a personality expressed purely by how they’re rendered in the GBC’s tiny screen, all in vivid colors and with no multi-jointing in sight (the game however does use the classic 8-bit trick of rendering big bosses as backgrounds to prevent slowdown and/or flickering), and the great, 90s anime-esque art design complements all of this perfectly. The soundtrack, composed by Jake “virt” Kaufman of OverClocked Remix and Shovel Knight fame, is also one of the finest a PSG chip can offer, with very complex melodies and a very distinctive sound that thankfully isn’t as blippy-bloppy as most western GBC titles.

What you’ll be looking after in each dungeon (besides the Elemental Stones, of course) are Transformation Dances, which are taught to Shantae by caged Half-Genies. These are rather simple button combos (left-B, right-B and so on) that must be executed in Dance Mode, which is activated by pressing Select and puts Shantae in place, shaking her booty as she waits for the player’s timed commands. This is where things get interesting, as as the small multi-segmented Dance Meter lights up, you must input each button not quickly in succession, but rather every time the musical note symbol lights up – if you don’t, the dance sequence breaks, and you have to start over. All of this happens in real time, so don’t go wasting your time dancing on an enemy-filled area. Also hidden in each labyrinth are several Baby Warp Squids, whose mother resides on the nearest town and will teach you a complex Warp Dance to it as a reward for bringing them back home. You can give the “wrong” baby squids to a mother and they won’t even bat an eye (“Err… Is that really my baby? They look all the same!”, they proclaim), though, indicating that there is a severe case of careless parenting going on among Sequin Land’s Warp Squid population.

Taking a hint from Castlevania II: Simon’s Quest, Shantae features a simple day/night cycle that affects both the overworld and the towns you visit, and while this is a neat concept, it’s also where all of the game’s problems stem from. Sure, it’s nice to see enemies and the townspeople change their behavior depending on the time of day and having to wait until dusk or dawn to visit certain establishments is neat, but at the same time doubling all baddies’ health during nighttime wasn’t a good idea, as they all already pack tons of it even during the day and going to the trouble of defeating them feels very unrewarding, as both health and currency drops are extremely rare.

This brings up another problem, as everything the shops sell in this game is extremely overpriced due to how scant money is in Sequin Land, which makes getting enough Gems to buy even a measly HP-restoring Vial a very difficult task. This wouldn’t be a problem if the way the game handles extra lives (yes, the game offers Shantae multiple lives, a la Link’s Adventure) wasn’t as bad as it is – dying sends you back to the beginning of a screen, and while this sounds pretty tame at first, it really isn’t, as these screens can get absurdly loooooong, and Save Statues (the only kind of checkpoint available on the overworld, besides the rare cave entrance) are few and far between. It’s just better to completely ignore enemies and just jump/scale/climb/fly over them, and doing this is actually mandatory later in the game if you don’t have a guide.

WayForward did everything they could to make Shantae stand out as the shining apex of old-school game design on a console whose library is composed mostly of licensed dreck and Pokémon spin-offs and ripoffs, but alas, the game was completely ignored by most consumers, who had already moved on to the Game Boy Advance, whose 32-bit architecture and graphical power surpassing that of the SNES’ made it predecessor look horribly outdated in comparison (which it was). This didn’t prevent the game from being praised by critics, though, who largely lauded it as the excellent big goodbye to the Game Boy Color that it is.

As the Internet grew, matured and became an everyday thing, these shining reviews eventually increased demand for the product, leading to extremely high prices on the used market. This made Shantae an unattainable treasure for most until July 2013, when in anticipation for the release of Shantae And The Pirate’s Curse for the 3DS and WiiU, WayForward re-released their 8-bit masterpiece via the 3DS Virtual Console service. Its GBC emulator was especially modified to suit the game’s intensive hardware requirements, making it run almost completely hassle-free on Nintendo’s current handheld except for a potentially-dangerous but already-patched glitch involving Baby Warp Squids. The only things different from the original 2002 release are the absence of the Capcom logo at the beginning and the fact that you can’t get the extremely powerful Tinkerbat transformation due to problems involving GBA emulation on the 3DS.

While the Game Boy Color Shantae underperformed at retail, it didn’t stop Wayforward from trying to create a sequel. They tested several different prototypes over the years, for development on platforms including the PS2 and PC, a full range 3D Mario 64-style platformer, and an isometric 3D platformer. There was also a 3D game for the Gamecube where Shantae would ride a raft. In fact, before Shantae was even developed to the GBC, Wayforward developed mock-ups showing the game as a 2.5D Klnonoa-style platformer targeted for the PS1. 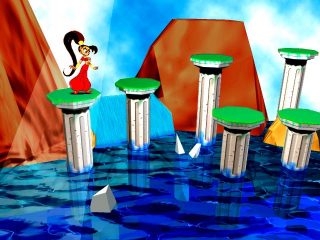 The one that got furthest into development was codenamed Shantae Advance, for the Game Boy Advance, of course. With the subtitle Risky Revolution, the game looked very similar to the original Game Boy Color game but with 16-bit visuals. Several screenshots and videos were released, and Wayforward even demoed the prototype during their Kickstarter campaign for Half Genie Hero. While it was not released, many of the graphical assets were carried over to Risky’s Revenge. There was also word of a DS game planned named Risky Waters. 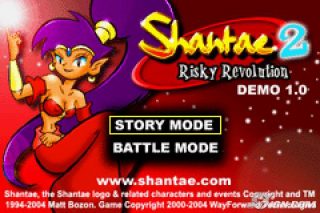 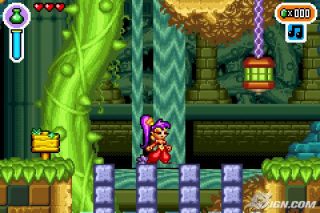 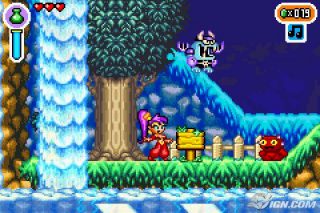 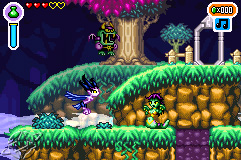 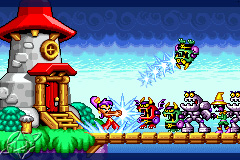 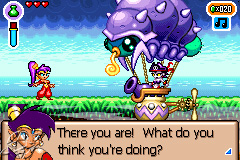 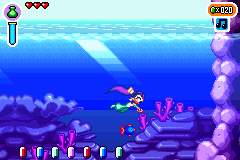 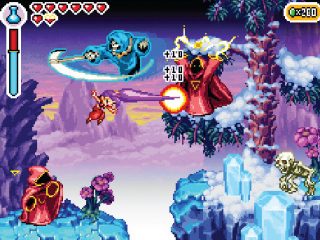 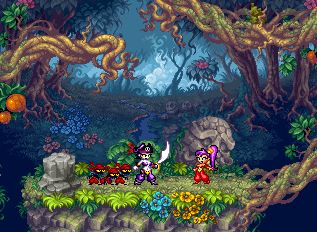 Return of the Ninja
Night mode