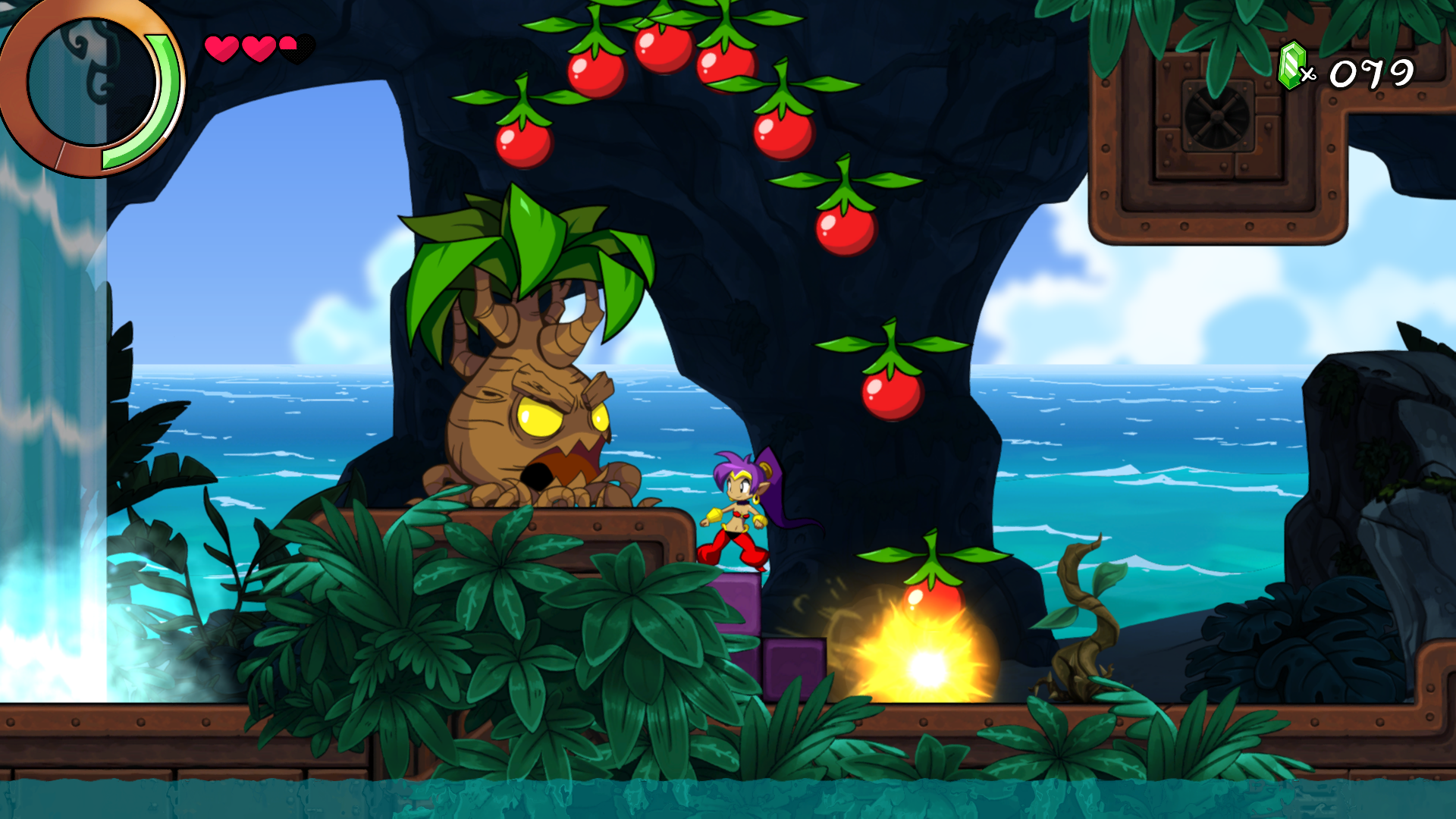 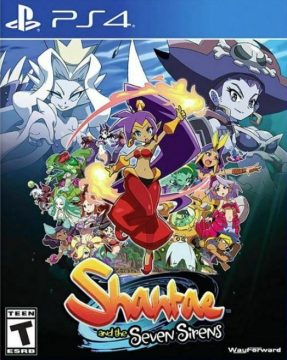 Shantae and friends decide to take a vacation in their fifth game, Shantae and the Seven Sirens. The purple haired heroine has been invited to Paradise Island to participate in the Half-Genie Festival, where she can mix and mingle with others of her kind. Things go awry almost immediately during a stage performance, where everyone except her is kidnapped, leaving her to begin an adventure to save them all. 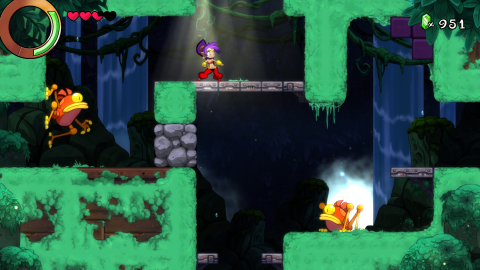 While the series’ previous title, Half-Genie Hero, was a stage-based platformer, Seven Sirens returns to the Metroidvania-style structure of the previous games. Paradise Island just happens to have been built on top of a gigantic labyrinth, with its interconnecting hallways feeling sort of like the PS1 classic Mega Man Legends, and it’s easily the most cohesive world design seen in the Shantae series. As to be expected from these types of games, when you rescue one of the half-genies, they’ll grant you their powers. This entry has streamlined some of the transformation mechanics, so you no longer need to execute a dance move to change – instead, you’ll automatically change into the relevant form when you hit the button, then change back to human form when you hit the ground. For example, you’ll turn into the Dash Newt when you hit the dash button, allowing you to cling to walls, or change into the Gastro Drill and Sea Frog whenever you jump into dirt or water respectively. You also can break blocks with the Bonker Tortoise get a triple jump in the form of the Jet Octo, using its ink jets to propel you through the air. Instead, the dances are now used to summon spirits, which can have various effects on items on the screen – Seer Dance will reveal hidden platforms and enemies, Refresh Dance will nourish plants (and replenish some health), Spark Dance will zap the screen with electricity, and the Quake Dance will shake the ground and break certain walls. 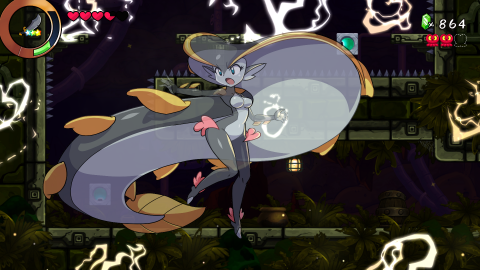 Defeated enemies will now drop associated cards, and collecting enough of them will provide some kind of perk, like increasing the speed of various forms, strengthening magic spells, and increasing item drop rates. There’s also a subquest to hunt for hidden gold nuggets, which can be traded to townspeople for super powerful cards. It’s a nice subsystem, reminiscent of the Souls from Castlevania: Aria of Sorrow, but somewhat limited by the fact that you can only equip three at a time, and some are far more useful than others, like the ones that increase damage or allow magic regeneration.

This being the fifth entry, the Shantae series has found its groove as far as its storytelling, and this one is much like the rest. Key moments include the introduction of the brother of Ammo Baron, the Armor Baron (who is apparently quite handsome according to Skye’s taste), as well as the return of Squid Baron, who reveals his dream to become a game creator. There’s also a scheme that sees Shantae outfitted in warrior bikini armor and encased in a blister pack, in a gag that’s taken more or less directly from a Treehouse of Horror episode from The Simpsons. The supporting cast of the other half-genies – prideful Zapple, polite Vera, cutesy Plink, older sister type Harmony, and zombie Fillin – are cute, but they’re drastically underutilized, and feel like they’re more part of the “cute girl in revealing attire” quota that the Shantae series has been leaning into more and more. 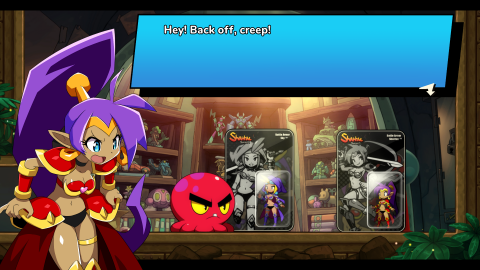 However, while the Shantae games were rarely all that difficult, they could at least provide some semblance of challenge. In contrast, Seven Sirens is almost hilariously easy. Health restoratives are abundant, and regular use of your magic attacks will make quick work of almost any boss. You’ll also probably run out of stuff to buy long before you reach the end of the game. This game was used at the launch of the Apple Arcade platform, and there’s definitely a sense that it was tuned for casual gamers, as opposed to 2D action platformer fans.

But other elements seem curiously stripped back from its predecessor, as if it were constrained by budget, particularly the visuals. It still uses the same high res sprites as Half-Genie Hero, but that game featured some attractive 2.5D backgrounds, those have been removed in favor of completely flat 2D. Similarly, Half-Genie Hero flexed its visual muscles regularly, with enormous, extravagantly designed boss fights. Here, despite being featured in the title, the Seven Sirens – like the Hydra-esque Tubeworm Siren or the mecha suit wearing Coral Siren – are somewhat minor in comparison, and their encounters are far too brief. Plus, since most of the game takes place in underground mazes, most of the game looks and feels rather drab, compared to the bright and sunny visuals the previous games are known for. Previous games also had an optional late game sidequest that would unlock the good ending, but there’s nothing like that here, leaving the ending feeling anticlimactic, in spite of having one of the better final boss fights. Plus, as a result of its Kickstarter stretch goals, Half-Genie Hero also had plenty of optional modes, including ones that starred other characters, but outside of a New Game+ mode, there’s nothing like that in Seven Sirens. 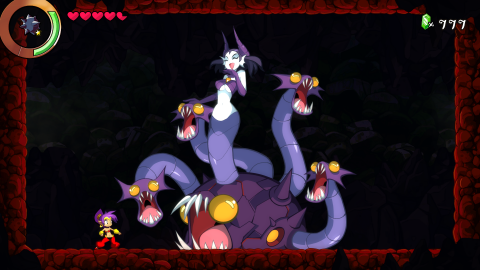 Regular series composer Jake Kaufman did not return for this entry, and his absence is definitely felt. The replacement team does a good job of replicating his style – lots of upbeat electronica blended with an old school chiptune sound, much of it quite catchy – but they’re lacking the boisterous energy of the previous soundtracks. The game also opens with an extremely brief cinematic animated by Studio Trigger (Kill la Kill, Promare, Gurren Lagann) which is super stylish; the in-game FMV anime scenes aren’t quite as elaborate but they’re more consistent with the character designs and give it the pleasant feeling of a 32-bit action-adventure.

Shantae and the Seven Sirens is pretty good, the best in the series behind Pirate’s Curse, but that’s more to do with the faults of the other titles than any particular strength of this one. It’s still as cute and charming as ever, but the Shantae series started when there wasn’t much competition in the Metroidvania field. Nowadays it feels a tad unambitious to other entries like Monster Boy, Hollow Knight and Guacamelee, and future entries will need a greater effort if it wants to keep relevant.