One of the most beautiful elements of the indie scene is that you get games by people who normally wouldn’t be considered game developers. Such is the tale of Dust: An Elysian Tail, developed almost entirely by animator Dean “Noogy” Dodrill. It has the look and feel of an early 80s animated picture, filled with sorta-cutesy animal characters but contrasted with darker thematics, the kind that mostly went away with the Disney renaissance of the late 80s. (The subtitle is a reference to the film An American Tail.) The story was based off of an independent animated film that Dodrill had been working on, called an Elysian Tail, before essentially turning it into a game. Combined with a love for classic 8 and 16-bit video titles, as with many indie developers, Dodrill put everything together to a brilliant whole. 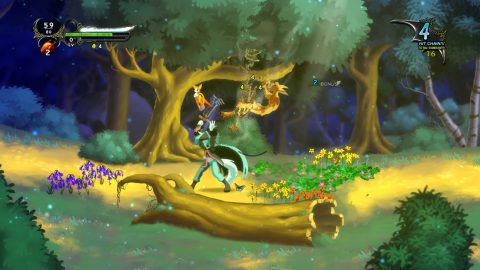 The eponymous Dust is an amnesiac, awakening in a dark cave. He is now, apparently, the wielder of a talking sword named Ahrah, who in turn is accompanied by a flying “nimbat” (kind of a squirrel with wings). As he emerges and finds a world overrun with chaos, he visits the local town and finds himself compelled to come their aid. 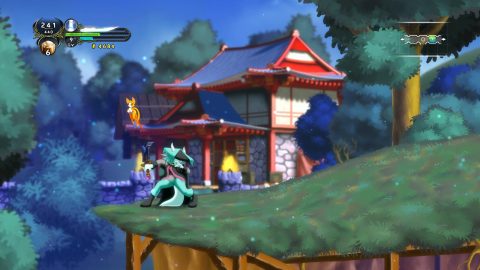 Dust is, basically, a Metroidvania, taking aspects of both games while still crafting something unique. Each major area is divided into several screens, and while progressing through a level is usually pretty straightforward, there are occasional branches, and more importantly, numerous hidden treasure chests. Many are inaccessible at first, but you can return to get them once you’ve found the proper power-ups – a slide attack, a double jump, the ability to climb vines, and so forth. 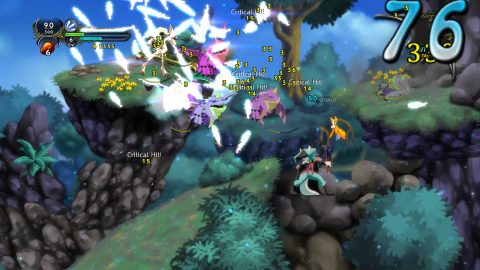 One of the many aspects that sets Dust apart from other similar titles is its combat system. Dodrill cites Ys Book I & II for the Turbografx-16 as one of his inspirations, and that is most definitely apparent with how the fighting feels flashy, exciting, and most importantly, perpetually rewarding. Dust’s sword slashes are fast and fierce, though enemies not only attack in large packs but also take quite a beating, requiring more advanced techniques. He can spin his sword like a saw blade (called the “Dust Storm”), careen around the screen like a flying whirlwind to slice up enemies in mid-air, and knock his enemies into the sky. 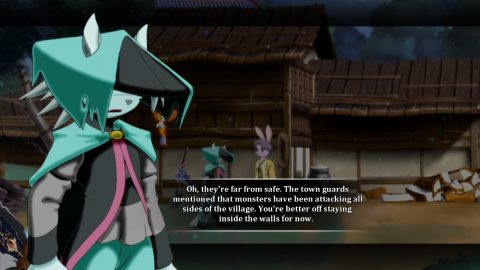 But the important aspect is Fidget. More than just a narrative decide a la Navi, Fidget is a magic caster, who can use one of three spells – homing light, fire, and lightning. By herself, her spells are that powerful, but combined with Dust Storm, scatters her projectiles all around the screen, attacking almost everything on the screen. By using this combo attack as an initial salvo, you can weaken foes before sending Dust in to hack his enemies to bits for a few seconds until the magic regenerates, then continue until you’ve completely annihilated everything in the area. The game keeps a running combo total, and as you wrack up hundreds and hundreds of hits, you also gain experience bonuses. It’s even more satisfying to roast a dozen enemies on pillars of flame, sending them dozens of feet into the sky, waiting several seconds for them to flop back to the earth, just to continue carving them up and grabbing the items that their lifeless bodies transform into. 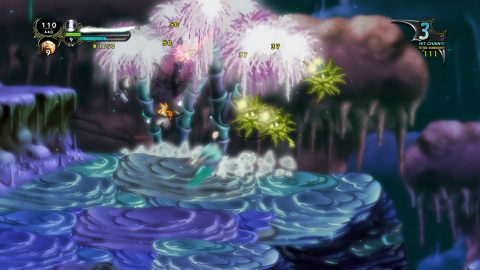 Playing defense is just as important. While Dust and Fidget’s attacks are extremely powerful, enemies can still do a lot of damage if you manage to get hit. It can be a little hard to make sense of the screen when there are so many enemies and particle effects, but you have both forward and backward dodges, so as long as you’re careful to keep enough space between you and any active foes, then you’ll be just fine. But there are still tons of healing items to find, which can be assigned to a quick-use button, some of which also provide additional curative effects or status buffs. Among the usual assortment of video game-y items like hot dogs, there’s also quite an assortment of Korean food, plus the “Mysterious Wall Chicken” (a homage to Castlevania) that pops out of every destroyed wall. 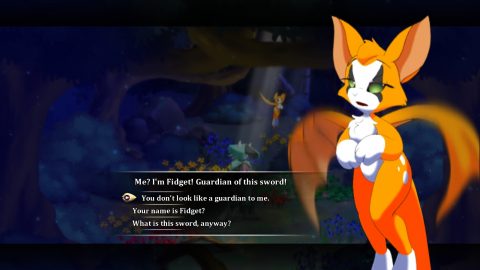 In the long run, the combat does get a little repetitive – Dust obtains all of his moves fairly early on, and Fidget does gain new magic throughout, the spells are all pretty similar. Most of the enemies behave similarly too, except for some that can take more damage, or the particularly annoying floating wizards, who teleport through your physical attacks. But the action is so satisfying that it’s not really a problem, and the level design is varied enough that it switches up regularly between combat, platforming, and exploration. 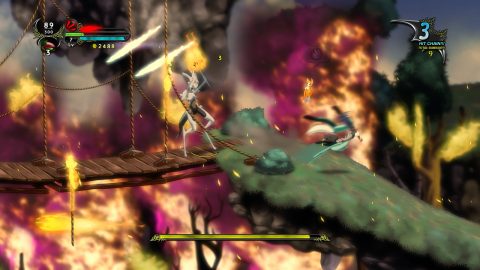 There’s also a fairly expansive crafting system. Though you can technically ignore it through most of the game, the only way to get the best equipment is to find all of the proper items. Once you find the blacksmith and run a subquest for them to find a specific item, then you can call her at any time to craft an item, as long as you’ve found the blueprints and all of the necessary components. One particularly nicety is that you technically only need to find one of each item – then, you can sell it to one of the shopkeepers, who will then periodically restock it and allow you to buy more of them, effectively acting as a duplicator. This allows you to utilize the crafting system without having to grind on a specific enemy, hoping for the necessary drops. 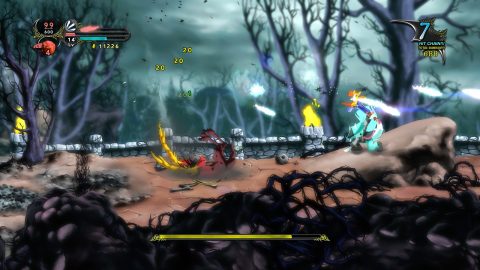 Along with the weapon enhancements and armor, there’s also a level up system to improve one of four stats – attack power, defense, HP, and Fidget’s magic power. Each level grants a significant boost so it’s important to prioritize, though ultimately you do have to strengthen all of your abilities in order to increase their maximum levels. 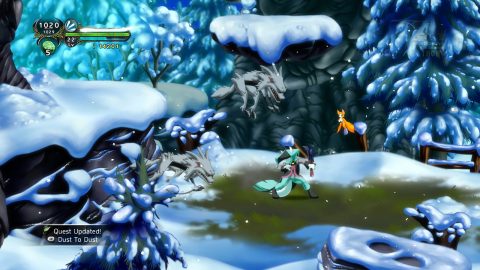 The game not only looks amazing but feels amazing too. This is where Dodrill’s skills as an artist and animator really pay off, as the game utilizes high res 2D artwork rather than pixel drawings of most other indie games. It looks incredible in stills and in motion, too. The closest equivalent is Vanillaware’s games like Odin Sphere and Muramasa, and while those games have more detailed characters and backgrounds, along with similarly fast-paced combat, they suffer greatly from repetition, from both a visual and level design standpoint. These are areas where Dust easily trounces these games, because there’s much more variety, and the areas are actually fun to explore. 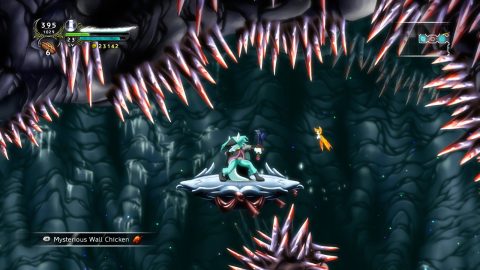 The level themes are the usual video game types – forests, caves, snowy mountains, and volcanoes – while the towns and its inhabitants exhibit a significant Asian (particularly Korean) influence. There’s also a randomized weather system, blanketing exterior areas with rain or snow, which doesn’t affect the action but does make the world feel more alive. (It can be turned off if it feels too distracting.) There are also a few fully animated cutscenes that occur during pivotal story moments, which work to make the game feel like a lost 32-bit action-RPG. 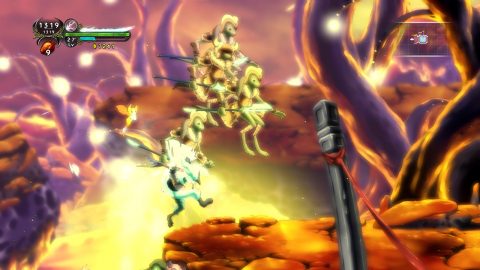 The major point of contention has to do with the anthropomorphic character designs. Though he spends most of his game with his face with his face covered by his mask, Dust is basically a cat, while other characters include walking, talking bunnies and mice. It’s unfortunate that the internet has basically ruined the “furry” art style, because Dust has absolutely none of the uncomfortable lasciviousness that’s often associated with such illustrations. Again, Dust is closer to an 80s Don Bluth cartoon than something you’d find at Anthrocon, and the story is much more violent (though not gory) than the fluffy animals would suggest. 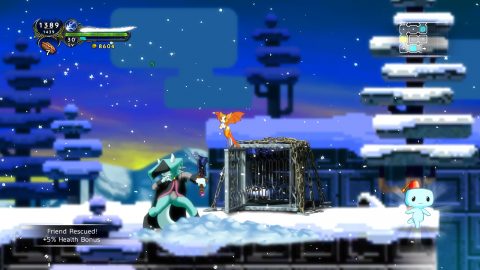 Indeed, the story is actually pretty decent. It’s not exactly a secret that whoever Dust was in his previous life, he wasn’t exactly a good guy, so he comes to become the savior of the land, fighting against the evil General Gaius while protecting the Moonblood race that the madman has threatened with genocide. The ultimate reveal of his identity is also extremely well done, despite the tropes inherent in the amnesiac formula. Some parts of it do feel a little rushed, the result of having to cut out the final third of a planned game in order to actually finish the game after nearly four years of work. But it still comes together pretty well, and the world is defined enough that it’d be explore it further in new adventures. 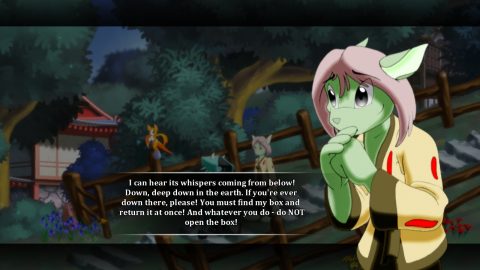 But even more importantly are the many townspeople. All of them are unique, with full screen animated portraits and voiced dialogue. Many of them have an optional subquests that range from simple and silly (craft a stuffed animal that looks like Fidget for a little girl) to heartbreaking (visit the mountains to find some snow as a memento for a young boy’s perished father). Completing this quests is rarely an obligation, but they feel satisfying, far beyond the tangible rewards you get for taking these on. 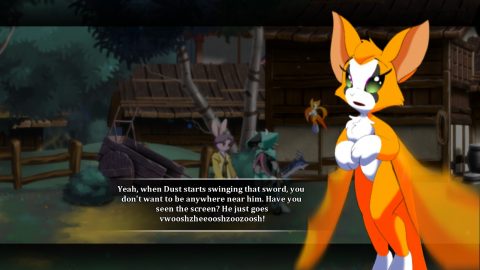 Fidget, too, makes a lively comparison. Though some may find her chirpiness and cutesiness unbearable, she provides a welcome contrast to Dust’s stoicness, and delivers some meta-commentary about some of the more ridiculous things that happen through the game. There are plenty of other references to other various video games, though they’re the subtle type that work by themselves even if you don’t get the reference. The shopkeepers channel both the cloaked weirdo from Resident Evil 4 and the librarian from Castlevania: Symphony of the Night. One area has you exploring various haunted mansions, including one underwater, much like Castlevania II: Simon’s Quest. The subquest to get a high combo namechecks the “C-C-C-Combo Breaker!” line from Killer Instinct. There’s also a subquest to create a “sanctuary” for various characters, mostly from other XBLA indie games, including Meat Boy and Bandage Girl from Super Meat Boy, Gomez from Fez, the titular one-eyed purple monster from The Maw, Tim from Braid, and others. 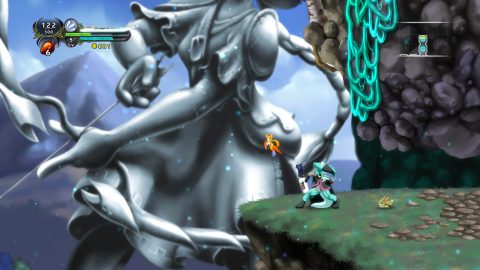 There’s quite a bit of dialogue and voice acting for the game’s numerous characters, most of which is surprisingly decent, especially for an indie title. The sound design in general is wonderful too. The rousing orchestral-styled score by Hyperduck Soundworks and Alexander Brandon is both memorable and powerful, though it does often end up overshadowed by the sound effects. These, too, play a role in how satisfying it makes the combat feel, from the whooshing of Dust’s sword attacks to the ever increasing pitch the orchestral hits as your combo increases, much less the explosions when you level up. 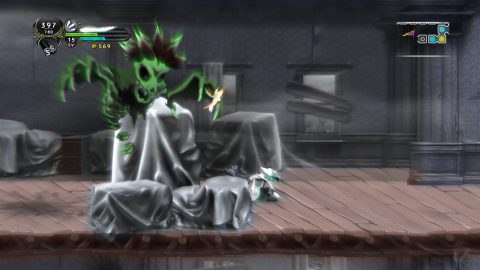 Dust: An Elysian Tail really is the complete package, made even more impressive by the fact that, outside of the music, the voice acting, and some of the writing, it was done entirely by Dodrill. It has the exploratory action elements of the genre’s best, a brilliant combat system, tons of stuff to find, craft, equip, a compelling, well written story with memorable characters in a fantastically detailed world, a gorgeous, distinct art style, brilliant sound design and a top-tier soundtrack. It’s easily one of the best games of its kind.