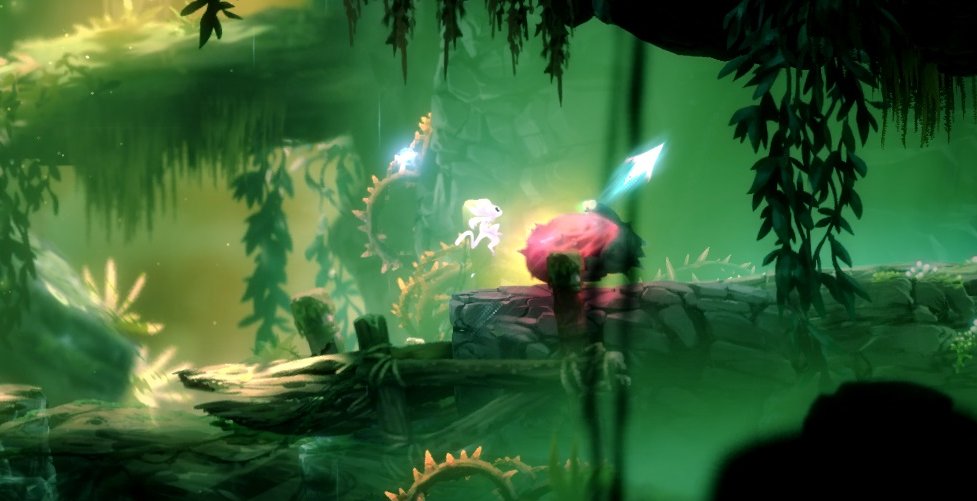 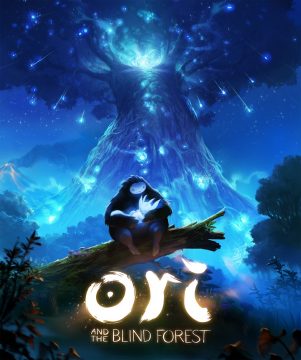 Ori and the Blind Forest, the first game developed by Moon Studios, an Austriac third-party developer of Microsoft, asks the question: “What would a game be like if you mixed the freedom and design of a Metroidvania with the art style of the modern Rayman games?” In fact, those two series were the main inspirations of the developers in the process of making this beautiful hand-drawn platformer. Hard, but still very approachable, the game is a journey to the beautiful but deadly Nibel Forest.

The game tells the story of Ori, a white guardian spirit of the Nibel Forest and his journey to restore the balance in the woods. After a storm, Ori ended stranded and lost from the Spirit Tree, where he used to belong. Naru, an inhabitant of the woods, found Ori and started to take care of him. They passed years living together, but an imbalance in the elements started to destroy Nibel and the food began to be scarce. Naru, protecting Ori, eventually died of hunger and Ori was left all alone again. 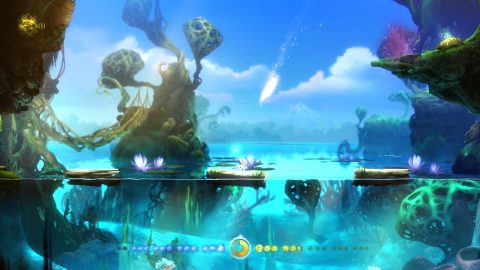 Alone, he almost dies, but is saved by Sein, a spirit that guides Ori to the Spirit Tree in the middle of the Nibel Forest. The Tree explains to Ori that the forest is withering because the three elements supporting the balance, Waters, Winds and Warmth, are not working properly, so it is Ori’s mission to visit the three elemental temples and fix the problem. In his mission, he meets a spider-like being called Gummo and a giant bird called Kuro, both working against him in his mission to restore the elements and save the forest.

It’s almost unnecessary to say that the visuals of Ori and the Blind Forest are stunning. The game is just utterly gorgeous, both in stills and in motion, that emulates a painting in motion.The environments are not too varied in its types of setting, consisting mostly of forests and caves (unless you count the temples, which are pretty distinguishable one from each other), but every area has a distinct feel nevertheless. Even if they are mostly forests, every screen looks unique.

The character design is somewhat less inspired. Ori is kind of weird (he seems like a glowing white monkey) and most of the enemies are not very characteristic or creative, too. Based in the developer’s quotes about taking inspiration from Rayman, that’s expected. Some characters are really good-looking, though, like Naru and the mighty Kuro. 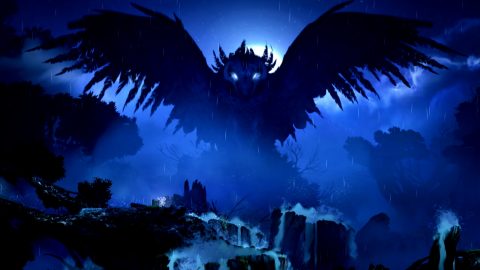 The music really sets the right tone to an emotional story, ranging from epic to intimate in moments. It works as a nice complement to the aesthetics of the game, creating the perfect atmosphere when it’s needed.

The action is extremely fluid. Ori is fast and agile, so, as you learn new abilities like the traditional Double Jump, he’ll turn into a zap of light jumping through the screen. The game, like any other Metroidvania, allows you to learn abilities during the game. There are two ways to get them. The main one is by finding them. As you progress in the story, you’ll find spirits that grant Ori new abilities. The most useful ones for exploration are gained like this, like Climbing, Double Jump and Charge Jump. Those are the abilities that make you reach new areas and explore secret rooms of areas you found before. There are also power-ups that you can find in secret areas. They enhance life, energy and sometimes give you extra experience points.

Apart from them, you can learn abilities by defeating enemies. Every enemy gives you some amount of experience points that help you to level up in the Ability Tree, a system that has three branches. The red one is all about power, which improves the strength and speed of your attacks in it. The purple branch is about exploration and the orbs you pick up, which will allow you to absorb health, energy and experience orbs faster and to find power-ups in the map easier. Finally, the blue branch is a mix of enhancement of energy skills, like having more proficiency in upgrading your energy and getting new abilities like swimming without breathing of dashing in the air. 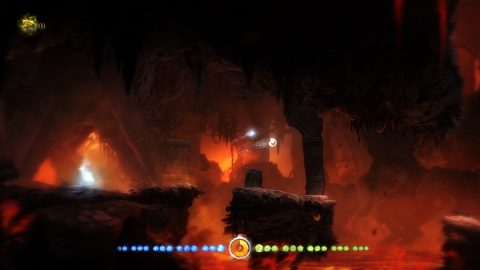 Apart from the aesthetics, the best aspect of Ori and the Blind Forest is the exploration. The game gives you a main objective and some direction of where to go, but you are free to take your time and explore your surroundings, discovering power-ups, secret rooms and challenging enemies. In a very Metroidvania way, new abilities open new ways and you’ll have to return many times to previous spots if you want to do 100% of the game. The map is very well constructed, so much in design as in presentation. Many areas interconnect with each other and, even if the game is not as nonlinear as Castlevania: Symphony of the Night, for example, you can expect plenty of freedom. It’s also very cool that if you zoom out the map, you’ll get away from the room to room view of the game and will be allowed to see an overworld map of the forest.

The combat, on other side, is possibly the weakest aspect of game. Ori doesn’t attack directly but instead fights using Sein. To use him, you only have to mash the attack button or press it for a powerful attack after you get a specific skill. This makes combat a mix of dodging attacks and mashing the attack button. It’s not especially complex, but the dodging part saves it from complete boredom, as some enemies, especially in late game, are very fast and quite hard to avoid. Some abilities help in combat and make it more fun later on, but in a game with so much good parts, combat ends up a bit undercooked. 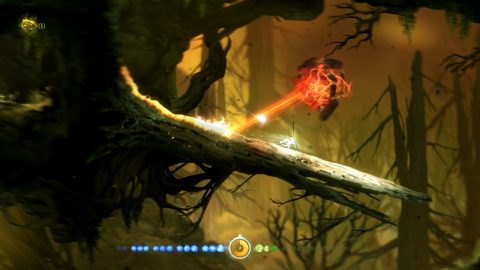 Ori and the Blind Forest is very hard, something fairly unusual for most Metroidvania games. It’s quite punishing and you’ll die very easily, especially in the first two thirds of the game. Fortunately, there’s a very good saving system called “soul link”. Anytime when you are not on unstable terrain, near enemies or in an area marked by the game as dangerous (normally, an area full of fire or any lethal trap), you can create a soul link to save your game and level up. There are a few save points, but they are more useful for warping around the map and healing since you can save anytime.

The most interesting aspect about the soul link system is that it makes harder for you to quit the game because you are angry that you died. In fact, it’s pretty much the same type of concept as found in masocore games like Super Meat Boy. As soon as you die, you’ll respawn in the nearest soul link you created in less than two seconds. This keeps the pacing steady and makes it easy for you to tolerate the high rates of death. The only problem is that saving doesn’t heal you (at least, not completely and not in the beginning of the game), so if you save when your health or energy orbs are too low, you can be stuck for some time in a dangerous area, until you actually can beat without taking damage.

Ori and the Blind Forest doesn’t provide real bosses, instead having sections in which you have to escape from the temples. There are three temples altogther in the game: Waters, Winds and Warmth. After you finish your objective in every temple, you have to run away from it, and that’s then things get really harsh. This is because, unlike the rest of the game, you can’t save when you are escaping from the temples. Get ready to spend a whole lot of time dying over and over again to pass these difficult sections. They aren’t the best part of the game, often being annoying and unpredictable, but can certainly please gamers that love difficulty and old school platformers. 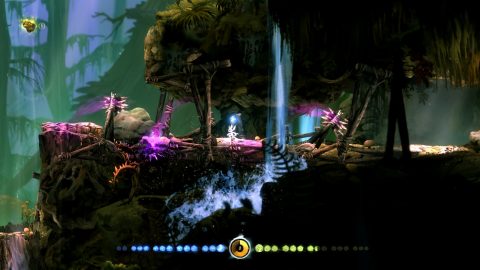 Though the game was initially released in 2015, it was followed up with an updated version the next year, subtitle Definitive Edition. This includes aded difficulty settings, allowing the player to play an easier or harder game, and a new area, Black Root Barrows, the place where Naru was born. It’s a large area in which the player can get two new abilities: Dash and Light Burst. While dashing is mostly a cool ability that won’t make much difference in the game (but will make you faster), the Light Burst unlocks several new rooms and power-ups. The Theater Mode, in which you can watch the cutscenes of the game and promotional content, was also added in this version.

Ori and the Blind Forest is a very well made Metroidvania with some minor issues. It definitely mixes well hardcore platforming difficulty with beautiful graphics, creating an experience that is, at the same time, welcoming to more hardcore gamers that like difficult platformers and to more casual players, drawn in by the beautiful graphics and the freedom of exploration.